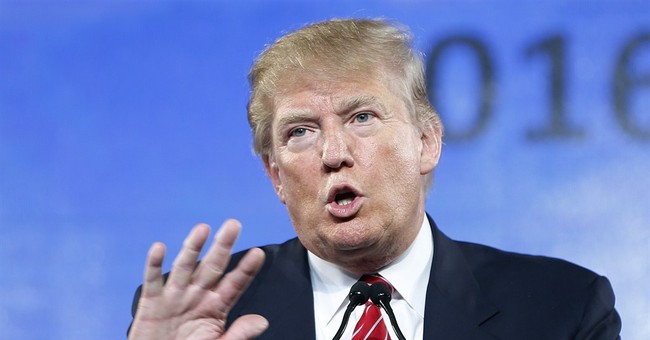 "My sole focus is to run as a Republican," Donald Trump told my Washington Examiner colleague Byron York last week, "because of the fact that I believe that this is the best way we can defeat the Democrats." He went on, "Having a two-party race gives us a much better chance of beating Hillary and bringing our country back than having a third-party candidate."

But when York asked if he would definitively rule out running as a third-party candidate, Trump said, "It's not something I'm thinking about right now." And as John Fund pointed out in National Review, it is something Trump has thought about in the past.

He made a feint at getting Ross Perot's Reform Party nomination back in 1999. And while Trump recently called Clinton "the worst secretary of state in the history of our nation," somehow overlooking James Buchanan's feckless stint in the Polk administration, he also contributed to her Senate campaigns and has called her "a terrific woman."

The fact is that Trump, as a national celebrity and a non-politician often at odds with both parties, has the capacity to launch an independent candidacy scoring double digits in polls, just as Perot did in 1992 and Colin Powell could have done in 1995.

That should scare not only Republicans but also Democrats. History tells us that third-party candidacies have reshuffled the political desk and disrupted seemingly stable political alignments in unanticipated ways.

Consider the Populist movement of the 1890s that came during a 25-year period when partisan competition was as close as today and divided government as much the norm, though with Republicans usually holding the presidency and Democrats usually with congressional majorities.

The Populists supported inflationary silver currency and aid to farmers, and the 1892 Populist nominee carried most electoral votes in the plains and mountain states (all admitted to the Union by Republicans).

In 1896 Democrats nominated the pro-silver, pro-farmer William Jennings Bryan, but in reaction the Northeast and industrial Midwest swung to the pro-gold standard Republican William McKinley. Republicans won seven of the nine next presidential elections.

Half a century later, in 1948, Strom Thurmond's States' Rights Democratic candidacy destabilized the national Democratic Party's majority coalition. Thurmond's 39 electoral votes didn't defeat Harry Truman, but Thurmond helped to detach the South from its traditional Democratic allegiance. Democratic nominees carried all the Confederate states 17 times before 1948. None ever has again.

George Wallace's third-party candidacy in 1968 advanced that process at the presidential level. But his 1964, 1972 and 1976 campaigns in the Democratic primaries provided a template for conservative Democrats to win congressional and state races in places that tilted Republican presidentially. That delayed Republicans' capture of majorities in the U.S. House until 1994.

Ross Perot's candidacy in 1992 came after Republicans won five of the six previous presidential elections, and after 1988 George Bush carried 40 states in 1988. But Perot's spring campaign "de-partisanized the critique of Bush," as deputy Democratic chairman Paul Tully told me at the time, in a way no Democrat, certainly not a little-known young governor of Arkansas, could have done.

But when Perot abruptly withdrew from the race, on the Wednesday of the Democratic National Convention, Bill Clinton's standing in the polls rose 25 points in one day -- surely a record that will never be beaten. Democrats won four of the next six presidential elections.

But their leftish policies, in Clinton's first two years and Barack Obama's two terms, have helped produce Republican majorities in nine of the next House elections and have resulted in the polarization of the electorate that so many pundits lament -- and which is the last thing Perot promised.

What could be the consequences of a third-party Trump candidacy? Immediate speculation is that it would cost Republicans the votes of many conservatives disgruntled with the party's officeholders and angry about immigration, trade and Common Core. That's certainly plausible.

But Trump might also siphon votes of non-college whites from Democrats in states where their support was high enough to produce Obama victories. Examples include Iowa, New Hampshire, Colorado, Nevada, New Mexico, Ohio, Michigan, Wisconsin and Minnesota. All voted 54 percent or less for Obama in 2012, and altogether they have 84 electoral votes.

The present close partisan balance and polarization will not last forever. And Donald Trump seems like just the kind of guy who could disrupt it -- in ways no one now can anticipate.