Hillary Clinton: Out of Sync With the Times 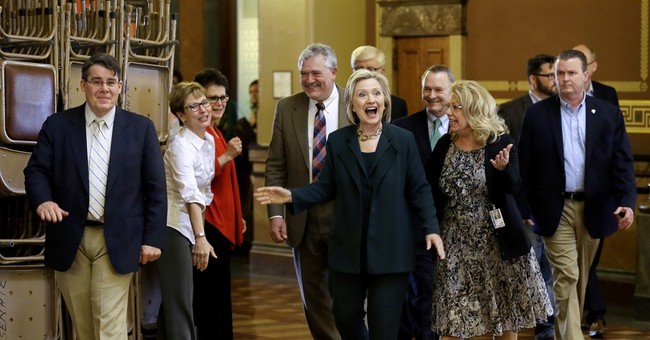 Presidents are inevitably shaped by the circumstances in which they campaign for -- and come into -- office. In 1932, Franklin Roosevelt called for "bold, persistent experimentation" and followed through once in office. Had Roosevelt run in another year, or had there been no Great Depression, he would have campaigned and governed differently.

The same can be said, to varying degrees, of the presidents who won open-seat contests since, John Kennedy, Richard Nixon, the two George Bushes and Barack Obama, and of those who unseated incumbents, Jimmy Carter, Ronald Reagan and Bill Clinton.

The Republicans who have announced their candidacies so far -- Ted Cruz, Rand Paul and Marco Rubio -- have similarly framed their appeals in contemporary context. That's made easier by the fact that none was in Congress when Barack Obama was first elected in 2008. We can expect something similar from other Republicans.

The lesson from history is that winning candidates and successful presidents show they are in step with the times. The rationale for their candidacies, while sometimes drawing on historical precedent, is rooted in what is contemporary.

This is obviously a problem for Hillary Clinton, just as it would have been for Eleanor Roosevelt if, somehow, she had run for president in 1952 (when she was younger than Clinton will be in 2016). She would have been defined in large part by her husband's record, which was specific to its time.

Bill Clinton was elected president in 1992 as a different kind of Democrat, more moderate on some issues than previous nominees, vastly interested in alternative public policies that he had advanced as head of the moderate Democratic Leadership Council.

His party was prepared to accept him because Democrats were uncomfortably aware that their candidates had lost five of the six previous elections and had won the other one only by a narrow margin. Political scientists proclaimed that Republicans had a lock on the White House. Liberal Democrats were willing to settle for half a loaf to break that lock -- which they did.

Democrats have won four of the last six presidential elections and won a popular-vote plurality in another. Liberals no longer feel they need to compromise to win.

Moreover, in the second term of a party's presidency, its wingers tend to get restless. They take their president's achievements for granted and are full of regret at what he didn't accomplish. Thus, conservatives with complaints against George W. Bush fueled the tea party movement. The energy and enthusiasm in the Democratic Party today is clearly on the Left.

In their view Hillary Clinton's appeal is, as Robert Merry characterized it in The National Interest, "Vote for me because I will tinker with the problems facing our nation far better than anyone else possibly could." Dovish Democrats remember she voted for the Iraq war resolution and favored military action in Syria at a time when Obama did not.

The Democrats of 1992 accepted a somewhat hawkish Clinton in order to win. The Democrats of 2015 feel no need to do so. No wonder the two-minute video announcing Clinton's candidacy didn't mention foreign policy, even though she served as secretary of state for four years.

The Clinton video was obviously designed to depict her as a candidate of the moment. Most of it consisted of showing cheerful Clinton supporters living their lives, apparently without the support of government programs that were the highlight of the 2012 Obama cartoon The Life of Julia. The video included gay couples, an attempt by Clinton to get credit with young voters for her recent (2013) endorsement of same-sex marriage.

Clinton tried to identify with liberal Democrats' concern with economic inequality. "Americans have fought their way back from tough economic times," she said, "but the deck is still stacked in favor of those at the top." But the solutions she has mentioned -- equal pay for women, mandatory pre-kindergarten, increased minimum wages -- are either already law or would have only a de minimis redistributive effect.

Following the video announcement, Clinton headed to Iowa in a Secret Service van dubbed Scooby-Doo -- after a cartoon program that debuted in 1969, before Cruz or Rubio were born. Behind closed doors, she mingled with a small group at an Iowa junior college while other students and reporters were barred from the hallway.