Can Jeb Bush -- or Anyone -- Come up With a Platform for Primaries, General and Presidency? 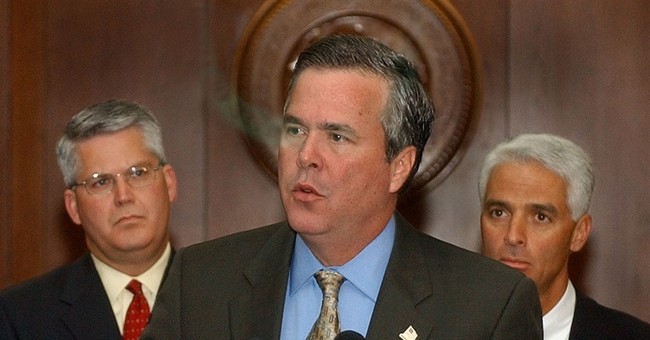 Trending
There are likely to be many surprises in a race for the Republican presidential nomination that has something like 20 plausible potential candidates. The first of those surprises came in the last hours before New Year's when Jeb Bush announced he was setting up an exploratory committee to consider running for president.

The website of Bush's new PAC, Right to Rise, shows that he has been paying attention to the ongoing policy dialogue among conservative thinkers. "The central moral promise of American life," it declares, is the right "to move up the income ladder based on merit, hard work and earned success."

That's in line with conservatives and Republicans who have been noticing that incomes below the top level have not been rising much, not only during the Obama presidency but also the presidency of George W. Bush. "The income gap is real," the PAC's website declares, but "only conservative principles can solve it by removing the barriers to upward mobility."

Bush's website does not get much more specific than that, with slides calling for education, entrepreneurship, free enterprise and "growth for everyone." But that suggests that Bush, assuming he runs, is preparing to follow up with a list of policy initiatives to emphasize in his campaign and, if that's successful, beyond.

Looking back on my experience as a political consultant, I have argued that successful candidates for executive posts -- mayor, governor, president -- need to emphasize a short list (three or four) of policies that will work for them in the primaries, work in the general election and, most important, work in governing.

But few candidates manage to do that because it's harder to do than to say. Republicans are tugged to the right and Democrats to the left in primaries, after which a move to the center is awkward and often unconvincing.

And anticipating what policies will work years ahead of time is always difficult and subject to error, particularly on foreign policy. Bill Clinton in 1992 decried American inaction in the Balkans, and then hesitated to take action for years after his election. George W. Bush in 2000 called for a "humble" foreign policy and took quite a different approach after Sept. 11, 2001.

Nonetheless, I believe that both Clinton and Bush did a good though not perfect job of following my formula on domestic issues in their initial presidential campaigns. Clinton set forth a "New Democratic" platform that included welfare reform and increasing the earned income tax credit. Bush called for tax cuts, education accountability and a Medicare prescription drug benefit. Both delivered on those promises, often with bipartisan support.

Barack Obama did less well, I would argue. He started emphasizing health care only when searching for a topic to mention in a debate. His appeal was based on his opposition to the then highly unpopular Bush and to the fact that he would be America's first black president. Unfortunately, Obamacare remains unpopular and the racial divide seems wider than before 2008.

In December, Jeb Bush told the Wall Street Journal's Gerald Seib that a Republican candidate needs to be "much more willing to, 'lose the primary to win the general' without violating your principles" -- adding that no one has done that lately and that it's not easy. That suggests he's hoping to follow my formula.

But neither he nor any of the other potential Republican candidates has done so yet. Neither has Hillary Clinton. Last week Bush pointedly noted that "if someone wants to run a campaign based on '90s nostalgia, that's not going to be very successful."

Meanwhile, political commentators have been trotting out scenarios for the Republican nomination fight. Mike Huckabee's announcement he is exploring a run sparked speculation that would help Bush (because Huckabee ran poorly among non-evangelicals in 2008). There's talk that Bush's support of Common Core and his stand on immigration (though he opposes a path to citizenship for those who came here illegally as adults) make him unnominatable.

Maybe so. We'll see how the campaign goes. There are too many possible permutations and combinations to regard any scenario as likely.

What I would like to see is many candidates doing what Jeb Bush seems to be setting out to do -- emphasizing a list of policy initiatives that could work in the primaries and the general and being the basis of a successful presidency. How many will manage to do so?