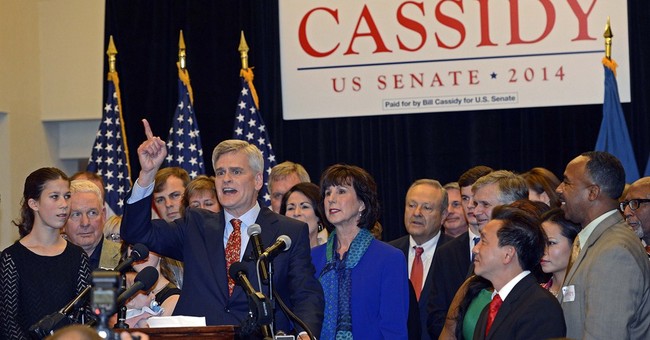 The defeat of Democratic Sen. Mary Landrieu by Republican Rep. Bill Cassidy in last weekend's Louisiana runoff ends an election year that has been very successful for Republicans -- and has implications for 2016. Some observations:

(1) Democrats relied heavily on legacy candidates -- and lost nevertheless. Mary Landrieu's father, Moon Landrieu, was elected to the Louisiana legislature in 1960 and as mayor of New Orleans in 1970 and 1974. Her father's anti-segregationist legacy helped Mary Landrieu appeal to black voters and win narrow victories in 1996, 2002 and 2008. It wasn't enough in 2014.

Other defeated Democratic candidates this year -- Mark Pryor in Arkansas, Michele Nunn and Jason Carter in Georgia, Mark Begich in Alaska, Mark Udall in Colorado -- had forebears first elected to Congress or as governor between 1961 and 1972. But that wasn't enough to overcome opposition to the Obama Democratic party's liberal policies. Exception to the rule: Gwen Graham, daughter of a former governor and senator first elected statewide in 1978, beat a Republican House member 50.4 to 49.6 percent in a Florida district, which President Obama narrowly lost (52-47) in 2012.

The obvious implication for 2016 is that the frontrunner for the Democratic nomination, Hillary Clinton, is something of a legacy candidate, too. Her own record as senator and secretary of state is perhaps less of an asset than the record of her husband, who first ran for office in 1974 and won his last election in 1996. That's starting to seem like a long time ago.

(2) Voters today increasingly vote straight party tickets. Begich ran 5 points ahead of Obama's 2012 percentage in his state, Landrieu 3.5 points ahead in hers. In the 1970s and 1980s, personal appeal, local issues and pork-barrel projects enabled similar candidates to run far ahead of their party's national leaders. Not so any more.

In 2012 only 26 of 435 congressional districts voted for a House member of one party and the presidential nominee of the other, the lowest number since 1920. In 2014, the number of "split districts" rose, but only to 31, mostly because Republicans picked up seats where Obama approval fell below 50 percent.

This makes for more rational politics: Voters can choose between reasonably coherent sets of public policies. The corollary: It produces Congresses -- and state governments -- that will push against the policies of an unpopular president, as in 2006, 2010 and 2014.

The implication for 2016 is that Democrats will be at a serious disadvantage if Obama's job approval stays at current levels or falls. Republicans will be if it rises up to 50 percent or above.

(3) Old political species -- Blue Dog Democrats, Rockefeller Republicans -- are pretty much extinct. Their constituencies have migrated into the other party. Affluent Californians are left-wing Democrats; the Jacksonian belt from Western Pennsylvania along the Appalachian chain and toward east Texas is increasingly conservative Republican.

Political scientist V.O. Key, author of the 1949 classic "Southern Politics," hoped that economic common interest would produce a liberal block of blacks and poor whites in the South. Instead, voters are divided by their views on cultural, moral and even religious views, inside and outside the South.

(4) Today's political map looks static, but may be a little more fluid than many think. The South is not quite solidly Republican. Obama carried Florida, Virginia and North Carolina, states which now have 57 electoral votes, in 2008 and the first two in 2012, and statewide Democrats were still competitive there in 2014. This, even though George W. Bush won between 52 and 56 percent in those states in 2004.

Similarly, Republicans may be competitive in 2016 in seven states with 71 electoral votes -- Colorado, Iowa, Michigan, Nevada, New Hampshire, Pennsylvania, Wisconsin -- where Obama got between 51 and 54 percent in 2012. This year Republicans won statewide races and/or the House popular vote in each.

(5) Republican strength is at historic highs. The party holds more House and state legislative seats than it has since the 1920s and only one less Senate seat than its post-1920s high. The 2008 Obama coalition which, some argued would dominate politics for decades, has been fraying: Blacks and gentry liberals remain faithful, but Hispanics and millennials are falling away, while Jacksonians grow increasingly opposed.

The 2014 results don't guarantee Republicans victory in 2016. But they show it's certainly possible.