Hispanics Seem to Be Souring on Obama Democrats 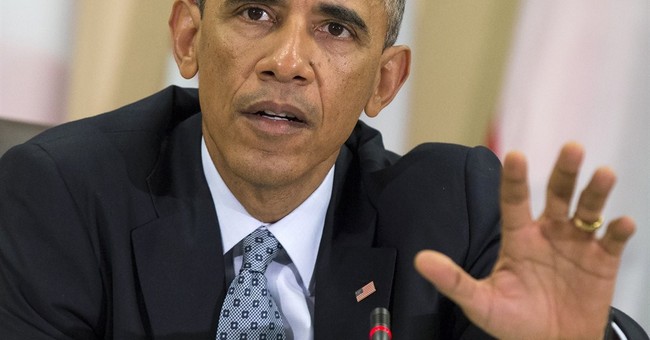 It's looking like a tough off year election for Democrats, with their Senate majority at serious risk and their chances of gaining House seats down toward zero.

Every party has a bad offyear sometimes; Republicans did in 2006. Sooner or later they recover. But in the crosstabs of polls and in party strategists' moves I see evidence that one group Democrats have been counting on is moving away from them: Hispanics.

You probably haven't heard much about this because Hispanics are scarce in all but one of the states with serious Senate races this year.hispa

The one exception is Colorado, where the 2012 exit poll said 14 percent of voters were Hispanic. Non-Hispanic whites there voted 54 to 44 percent for Mitt Romney. But Hispanics voted 75 to 23 percent for Barack Obama, providing all of his popular vote margin and more.

In the last decade liberals have surged to victories in all top-of-the-ticket races in a state that once seemed safely Republican. This year that chain may well be broken. Incumbent Sen. Mark Udall trails Republican Rep. Cory Gardner in the RealClearPolitics average of recent polls and is at 44 percent, well below 50. Incumbent Gov. John Hickenlooper leads former Rep. Bob Beauprez by only 0.4 percent.

Looking at poll crosstabs where available, I find that neither Democrat is close to Obama's 75 percent and both Republicans are running at or above Romney's level. One poll even has the Hispanic vote evenly split.

Precision is impossible, because the Hispanic sample size is only 90 to 160, with a large statistical margin of error. But there's other evidence of Democratic weakness among Hispanics, notably the withdrawal of national Democratic funding of Andrew Romanoff, the well-known former state legislator challenging 6th district Republican incumbent Mike Coffman.

The 6th district's population is 20 percent Hispanic and it voted 52 percent for Obama. Coffman switched to favoring comprehensive immigration legislation and his campaign and the state Republican party launched Hispanic outreach efforts. Romanoff could not carry the district without a big Hispanic margin; evidently internal polling says he's not getting it.

The same may be true in California's Central Valley, where House Democrats withdrew funding for challengers to Republicans Jeff Denham in the 10th district (40 percent Hispanic) and David Valadao in the 21st district (72 percent Hispanic). Environmental regulators' cutoff of water to the Central Valley have hurt the area's economy and apparently Hispanic voters don't like that.

Hispanic voters also may not like some of the liberal causes championed by Colorado's Democrats. After they passed highly restrictive gun regulations, two state senators were recalled by voters, including Angela Giron who represented a previously Democratic district in 42 percent Hispanic Pueblo County.

In the Senate race, Udall has concentrated heavily on Republicans' "war on women" and opposes any limits on late-term abortions. The moderately liberal Denver Post, endorsing Gardner, said Udall's "obnoxious one-issue campaign is an insult to those he seeks to convince."

Evidently issues dear to the heart of affluent gentry liberals -- gun control, environmental restrictions, abortion absolutism -- are not all that appealing to many Hispanic voters. Another example: Abortion absolutist Wendy Davis lost 26 Hispanic counties to a nuisance candidate in Texas's May Democratic primary. Some Hispanics own guns; others seek work in industries shut down by environmentalists.

Conservatives are wrong in supposing Hispanics oppose abortions like 1950s Catholics. But few Hispanics regard allowing late-term abortions as a central issue.

As for immigration, relatively few Hispanics tell pollsters that's a top issue. They bristle when Republicans make statements that seem contemptuous of immigrants. But they've also noticed that Democrats didn't pass legislation legalizing illegals when they had the votes.

Historically, the Democratic Party has been a collection of out-groups who, when gathered together, make up a majority of the nation.

But each out-group has different interests and priorities. Holding them together is difficult. The Obama Democrats have treated Hispanics as a passive and reliable source of votes. They have not delivered on issues Hispanics care about and instead have advanced the pet causes of gentry liberals. The evidence from Colorado, California and Texas suggests Hispanics may be noticing.