It Looks Like a GOP Wave; the Question is How Far it Goes 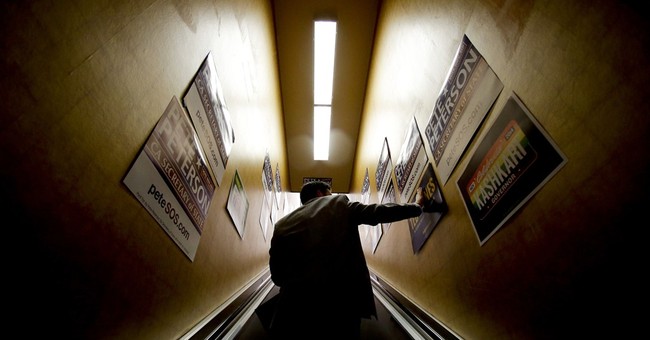 Republicans seem to be pulling away in the race to win a majority in the U.S. Senate. At least this week.

In mid-September, several polls seemed to be going the other way. The well-informed Washington Post analyst Chris Cillizza wrote that for the first time in this election cycle, odds favored the Democrats keeping their majority.

Two weeks later, he was singing another tune. Analysts at the Post, the New York Times and FiveThirtyEight, in addition to psephologists Charlie Cook, Stuart Rothenberg and Larry Sabato, all agreed.

What may have happened is this: Over the summer, Democrats used their money advantage to savage Republican opponents. When spending got equalized in September, Republicans' numbers rose.

Only in North Carolina, which Romney narrowly carried, has the Republican not yet overtaken the incumbent Democrat Sen. Kay Hagan -- and her edge is narrowing in the most recent polls.

Psephologists used to have a rule that incumbents running below 50 percent against lesser-known challengers would inevitably lose. Everyone knows them, the logic went, and half aren't voting for them.

That rule doesn't seem to apply anymore, but perhaps another one does. The RealClearPolitics average of recent polls puts Democratic incumbents in these five states at 41 to 44 percent of the vote.

In seriously contested races in the last six Senate cycles, starting with 2002, only two incumbents polling at that level in September ended up winning. One was appointed to an open seat and thus probably not widely known. Both ended up with less than 50 percent and won by plurality.

Psephological rules are made to be broken, sooner or later. Polls can fluctuate. Events or campaigning can change attitudes. Democrats now trailing might win Republican seats in Kentucky or Georgia. Or the former Democrat running as an Independent in Kansas could win and cast the deciding vote for Democrats. There are ways they can hold their Senate majority. But most likely they won't.

That should settle the ongoing argument in psephological circles about whether this is a "wave" year. Some argued that since Republicans were expected to gain only a few seats in the House -- something the insiders pretty much agree on -- and since they were by no means certain of winning a Senate majority, it might not be a wave at all.

As for Senate elections, the Republicans entered this cycle down 55 to 45. It's noteworthy when well-informed analysts give a party a better-than-even chance of making a net gain of six Senate seats, as they have throughout this cycle. I can't remember consensus predictions of six-Senate-seat gains in 1974, 1980, 1994 or 2006 -- all now regarded as wave years.

All of which is to say that focusing too closely on fluctuations in the polls risks losing sight of the bigger picture. Rewind back five years: The Obama Democrats expected their major policies to be popular.

They expected that most voters would be grateful for the stimulus package, for Obamacare, for raising the tax rate on high earners. They aren't.

Democrats expected that running for re-election they'd be running ads touting these genuine accomplishments. They aren't. Instead, you get personal attacks on Republican nominees and oldie-but-supposedly-goodie reprises of the "war on women" theme.

Out in Colorado, about half of Democrat Mark Udall's TV spots have been on abortion. Even liberal commentators are questioning whether that's smart. But maybe the Udall consultants sitting around the table can't come up with anything better.

Early in the 2010 cycle, Barack Obama told an Arkansas House Democrat that he needn't worry about voters because "you've got me." Today, all four Arkansas House seats are held by Republicans. Democratic Senate candidates in multiple states have been shunning Obama campaign appearances.

We're watching a wave come in. We just can't be sure how far it goes.