How Obama is Turning Liberalism Into an Instrument of Coercion 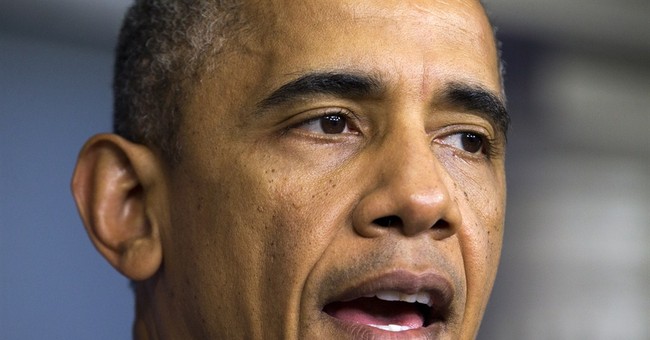 In the 20th-century, New Dealers revised this definition by arguing that people had a right not only to free speech and freedom of religion but also, as Franklin Roosevelt said in his 1941 Four Freedoms speech, freedom from fear and from want.

Freedom from want meant, for Roosevelt, government provision of jobs, housing, health care and food. And so government would have to be much larger, more expensive and more intrusive than ever before.

That's what liberalism has come to mean in America (in Europe it still has the old meaning), and much of the Obama Democrats' agenda are logical outgrowths -- Obamacare, the vast expansion of food stamps, attempted assistance to underwater homeowners.

But in some respects the Obama Democrats want to go further -- and are complaining that they're having a hard time getting there. Their form of liberalism is in danger of standing for something like the very opposite of freedom, for government coercion of those who refuse to behave the way they'd like.

Example one is the constitutional amendment, sponsored by 43 of the 55 Democratic U.S. senators, which would cut back on the First Amendment and authorize Congress and state legislatures to restrict political speech.

The amendment is poorly drafted and leaves many questions dangerously open (who qualifies for the media exception?), perhaps because its sponsors know it has no significant chance of passage.

It also seems animated by a delusionary paranoia: Democrats profess to be afraid they'll be swamped by a flood of rich people's money, even though their rich supporters have raised more than the other side in recent years.

Nonetheless the picture is striking. Many conservatives wanted to change the First Amendment in order to prosecute flag burning, not the Founding Fathers' central concern.

Today's liberals, in contrast, want to change the First Amendment to restrict political speech, which is the core value the Founders sought to protect.

Or consider liberals' recent attitude toward free exercise of religion, made plain in their reaction to the Supreme Court's Hobby Lobby decision declaring the Obamacare contraception mandate invalid as a violation of the Religious Freedom Restoration Act.

The RFRA was passed, with three dissenting votes, and signed by Bill Clinton in 1993. It was prompted by a Supreme Court decision upholding the penalization of Oregon Indians for using peyote, which they claimed was a religious rite.

In passing RFRA, liberals and conservatives alike responded as Americans have often done when small groups have claimed laws infringed their religious beliefs: They put a higher priority to a few individuals' free exercise of religion than they did to widely supported laws of general application.

Thus Congress allowed for conscientious objectors to be exempt from military service in World War II, in which more than 400,000 U.S. service members died. Even in a national emergency, when lives were at stake, Americans were willing to accommodate religious beliefs that a large majority did not share.

Today's liberals take a different view. They want to make Hobby Lobby's owners pay for what they regard as the destruction of human life. They spent much time arguing the owners are mistaken (actually, they have a plausible scientific basis for their belief).

But the point about freedom of religion isn't that everyone has to agree. On the contrary: Almost no one agreed with the Oregon Indians' beliefs about peyote.

They just thought the larger society should not use compulsion to bar them from practicing their religion. Today's liberals seem comfortable with using the force of law to prevent people from doing so.

Or consider the Supreme Court decision in Harris v. Quinn, ruling that caregivers for disabled relatives paid with Medicaid funds are not state employees and thus cannot be forced into a public employee union.

Today's liberals did this in President Obama's Illinois to channel public money away from low-income caregivers and toward public employee unions that do so much to fund and support the Democratic Party. They seem unembarrassed by this crass political motive and indifferent to the plight of the needy.

Today's liberals seem bent on pushing people around, preventing them from speaking their minds and practicing their beliefs. It's not just the language that's changed.