Dems' Lock on Senate Is Mixed Blessing for Obama 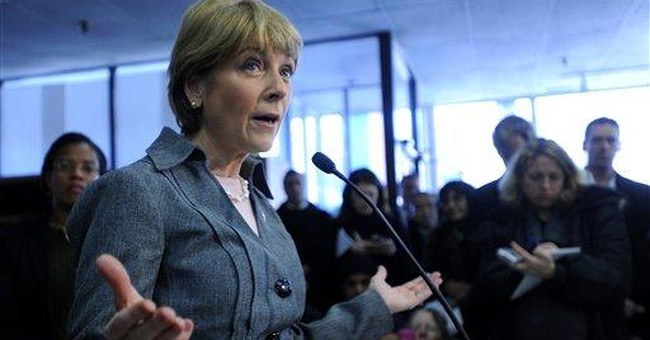 Year One of the Obama administration ends Wednesday. Another era may come to an end the day before, when Massachusetts voters -- or at least those of them motivated enough to vote -- choose a senator to fill the three years remaining in the term of Edward Kennedy, who held the seat for 47 years.

If Republican Scott Brown wins that election -- and at this writing he seems to have an excellent chance to do so -- that election will mean the end, after just seven months, of the Democrats' 60-seat supermajority in the Senate.

That era began in July when Al Franken was seated after protracted litigation over the result in an election in which both he and incumbent Republican Norm Coleman got an underwhelming 42 percent of the votes. And Franken was the 60th Democrat only because in the preceding April Arlen Specter, in his 29th year in the Senate and facing defeat in the Republican primary, switched parties for the second time in his political career.

And if you want to go back a little further, Democrats owed their 60 seats to the victories in 2006 of Jon Tester by 3,562 votes in Montana and Jim Webb by 9,329 votes in Virginia. In the 435 House races each year, close races tend to be split evenly between the parties. But in the 30-some Senate races in each cycle, a very small number of votes can make a huge difference in the balance of power in that chamber.

So the Democrats' 60-vote supermajority was the result of a series of happy (or unhappy, depending on your point of view) accidents. The same was true of the 55-45 majority Republicans held just three years ago.

The very real possibility that the Democrats may lose their 60th seat -- and in Massachusetts, the only state George McGovern carried in 1972 -- suggests that it was perhaps not such a happy accident for them in the end.

Barack Obama got 62 percent of the vote in Massachusetts in 2008, his eighth best in any state. His percentage was lower in 42 other states. With the Massachusetts seat in jeopardy, no Senate seat in those 42 states can be considered utterly safe for Democrats in today's climate of opinion.

That climate might have been different if Democrats had never gotten that 60th seat. In that case, they would have had to bargain with Republicans to pass a health care bill and might even have proceeded on the genuine bipartisan approach that Obama promised in his campaign.

We might have been spared the spectacle of the Louisiana purchase ($300 million for Mary Landrieu's vote) and the Cornhusker hustle (Ben Nelson got Nebraska exempted from Medicaid increases). Or at least the onus of such spectacles would fall on Republicans as well as Democrats.

But with 60 seats, the Democratic leadership took the partisan path and the Obama White House supinely went along. They ignored the abundant evidence that their government-directed health care bills were increasingly opposed by most voters.

The 60th seat was a temptation, and like Oscar Wilde, the Democrats were able to resist anything except temptation.

Barack Obama has acknowledged that the Democrats' health care legislation is unpopular. He says the public will come to like it when it goes into effect (although some taxes kick in before the supposed benefits). Other Democrats say that once they pass it they can then persuade voters it's a good idea, as if they haven't been trying to do that for most of a year and conspicuously failing.

But their health care bill is not going to be passed if Brown is elected. Some Democrats are talking about delaying his swearing in and passing a bill in the meantime. Doing that in open defiance of the clearly expressed views of (Massachusetts!) voters would touch off a political firestorm unlike any we've seen since Richard Nixon fired special prosecutor Archibald Cox. Democrats up for re-election like Evan Bayh and Blanche Lincoln should understand that and not go along.

Obama was supposed to be a great persuader. It turns out that's only half true. He did persuade most of us that he should be president. But in Year One, he has failed to persuade most of us to support his major proposals. He's even moved us in the other direction. That's clear, whatever happens in Massachusetts.