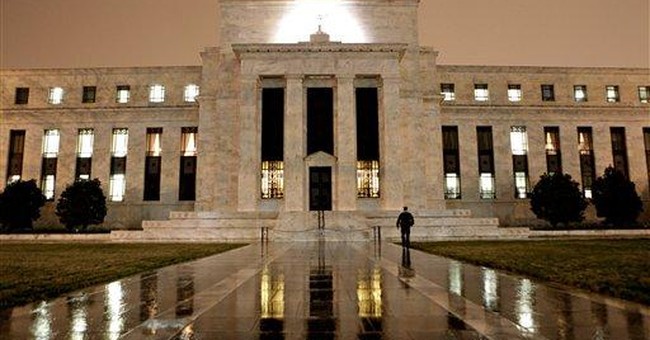 The recession is over, we are told. The Commerce Department announced Thursday that the economy grew in the third quarter of 2009 by 3.5 percent. Great, huh?

Maybe not. About half that growth came from the Cash for Clunkers program, which transferred into the third quarter auto sales that would have occurred later. The expiring tax credit of $8,000 for first-time homebuyers stimulated some house sales. Most of the impact of the $787 billion stimulus package, we are told by the Obama White House, has already been felt.

"There were few signs in the new data," writes The Washington Post's Neil Irwin, "that the private sector will be able to sustain that growth once the government pulls back." Or, as Peggy Noonan writes in The Wall Street Journal, "No one has any faith in these numbers."

And no one has much confidence that unemployment, which hit 9.8 percent in September, will decline significantly any time soon -- or that the policies of the Obama administration and Democratic congressional leaders will stimulate the creation of new jobs.

Higher tax rates on high earners, which will take effect when the Bush tax cuts expire next year, will certainly not create jobs. The taxes and increased federal spending in the Democrats' health care bills won't, either. Nor will the increased cost of energy that would be imposed by the Democrats' cap-and-trade legislation.

As for the stimulus package, blogger Daniel Blatt notes that twice as many Californians filed for unemployment benefits last week than the total number of California jobs that were "created or saved," as estimated by recovery.gov.

So we may be facing an extended period of high unemployment with a liberal government in office. An interesting question for political analysts -- and elected politicians -- is what effect this will have on public opinion.

History gives us some clues. The one similar extended period that comes to mind was the second term of Franklin Roosevelt, when a serious recession hit the economy in 1937 and unemployment continued stubbornly above 10 percent until wartime mobilization began in the 1940s.

Two-thirds of voters wanted him to follow more conservative policies and felt that administration policies were delaying economic recovery. Large majorities opposed increased government spending, even after an FDR fireside chat. By a two-to-one margin, voters thought the economy would do better under Republicans.

Large majorities opposed the sitdown strikes that enabled the United Auto Workers to organize the auto companies, and two-thirds wanted the pro-union Wagner Act revised or repealed -- attitudes echoed in the current opposition to the GM and Chrysler bailouts and to the unions' card check bill to effectively abolish unionization elections by secret ballot.

Americans in the late 1930s seemed to understand that high taxes and government spending programs were producing what Amity Shlaes in "The Forgotten Man" calls a capital strike -- a reluctance by businessmen to invest so long as government and unions threatened to take most of their returns away.

Polls looking ahead to the 1940 election showed Republicans ahead nationally and leading in the large Northern states then critical in deciding presidential elections. Two-thirds of voters opposed a third term for Roosevelt, and in hypothetical match-ups Roosevelt trailed Thomas Dewey, then Manhattan district attorney, and ran only even against Robert Taft, then in his first year in the Senate.

All this is not familiar today because history took a different turn. War broke out in Europe in 1939, and most Americans, anticipating correctly that the United States would be drawn in, ended up preferring the seasoned leader Roosevelt over neophytes like Dewey, Taft or the 1940 Republican nominee Wendell Willkie.

History does not repeat itself exactly, but polling evidence indicates that Americans today, like Americans in the late 1930s, see big government spending programs as an impediment, not an aid, to job creation. They see a future with sluggish economic growth, disincentives to economic and technological innovation (like that tax on medical devices), and continued high unemployment that will hold down wages and incomes.

The Democrats' policies, formulated when the economy was growing and unemployment was low, seem poorly suited economically and thus politically to these parlous times. The recession may be over, but it's not at all clear that happy days are here again.

BREAKING: Biden Announces Mass Pardons
Townhall
Did the AP think they wouldn't get caught red-handed trying to push blatantly false narrative about Ron DeSantis' leadership?
Twitchy
Katie Hobbs a No-Show at Hispanic Town Hall, as the Podium Next to Kari Lake Was Left Empty
Redstate
Here's What Happened When a Concerned Mom Dressed Like Drag Queen at a School Board Meeting
PJ Media