Four Races Will Test the Strength of Obama's Majority 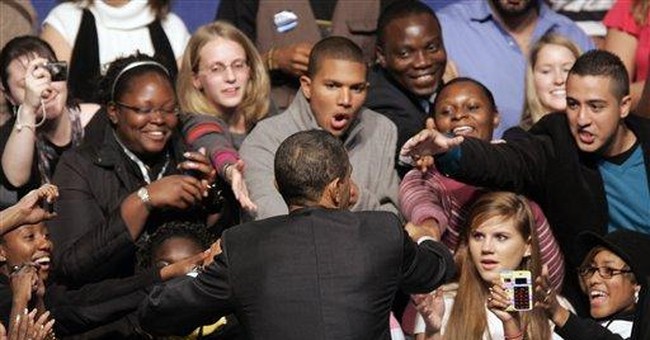 Five days from now the voters of New Jersey and Virginia will elect governors. Voters in the 23rd district of New York and the 10th district of California will elect new members of the House of Representatives to replace incumbents, a Republican and a Democrat, who were appointed to positions in the Obama Defense and State departments.

All four of these constituencies voted for Barack Obama 51 weeks ago. Obama won 57 percent of the vote in New Jersey, 53 percent (his national average) in Virginia, 52 percent in New York 23 and 65 percent in California 10.

Yet all of this territory was once Republican. Suburb-dominated New Jersey voted 56 percent for George H.W. Bush in 1988. Southern-accented Virginia hadn't voted for a Democratic presidential candidate since 1964. The last time the territory covered by New York 23 elected a Democratic congressman was in 1870. And the incumbent who is being replaced in California 10 won her seat by beating a Republican in 1996.

In other words, the 2009 contests are a reasonably fair test of the strength and durability of the Democratic majority that Obama and his ticket-mates assembled in 2008, a majority that was only made possible by gains in hitherto Republican territory. It is also a test of the capacity of Republicans to regain turf they have lost.

Yes, the character of the individual candidates and local issues can make a difference. But the basic issues in these four contests are reasonably congruent with the national issues now being debated in Congress and this summer in town halls across the nation.

The result in Virginia is not much in doubt. Republican Bob McDonnell has campaigned on transportation, education and taxes, and holds a wide lead in polls. Democrat Creigh Deeds, though from a rural area, opted not to follow the rural strategy that elected Democrat Mark Warner governor in 2001 and senator in 2008, but instead sought to use cultural issues -- a 20-year graduate school thesis of McDonnell's helpfully unearthed by The Washington Post -- to capture the big majorities Democrats won in the Northern Virginia suburbs of Washington in 2005, 2006 and 2008.

It hasn't worked. No one believes that a McDonnell victory will result in women being expelled from their workplaces and sent back to their ironing boards. Bigger things -- the size and scope of government -- are at stake this year.

In New Jersey, things are murkier. Democratic Gov. Jon Corzine's approval numbers are stuck around 40 percent, but he has used his wealth to pummel Republican Chris Christie with negative ads and hopes that independent Chris Daggett will steal anti-Corzine votes from the Republican. If Corzine wins because he is perceived to be the lesser of three evils, it will hardly be an endorsement of Democratic policies.

The situation in New York 23 is simply bizarre. Local Republican leaders nominated an assemblywoman who has been endorsed by the ACORN-allied Working Families Party and who backs the unions' card check bill. One of the Republicans passed over was nominated by the Conservative Party and has picked up endorsements from Sarah Palin and Tim Pawlenty. He has raised money on the Internet and from the anti-tax Club for Growth. He's now leading in two polls commissioned by his supporters.

All of which highlights, in exaggerated form, the distrust of tea party protesters for Republican insiders and could result in a plurality for the Democrat. As William Galston points out in his New Republic blog, during Obama's presidency voters have been growing more conservative but remain disdainful of Republicans.

The California 10 results will come in last, and just about everyone will be astonished if the Democrat, Lt. Gov. John Garamendi, doesn't win in this San Francisco Bay Area district. But many things are possible in special elections.

Both parties will try to spin the results seven days from now. But one thing seems clear. None of the Democrats seems likely to equal Obama's 2008 percentages in these states or districts. None may even come close. But Republicans may find it difficult to convert the increasing unease with Democratic policies into Republican (or conservative) victories across the board.