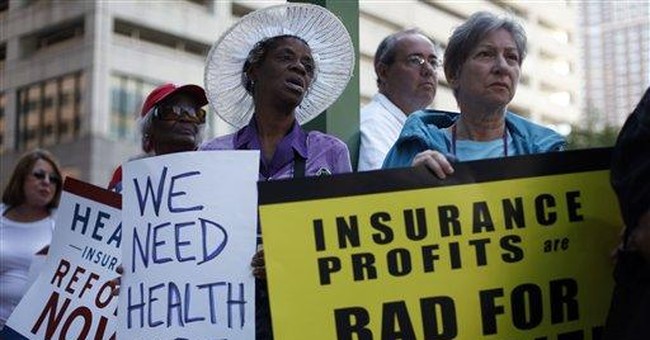 "Very active." That's what White House aides say Barack Obama is going to be this month. That's probably an understatement. Obama faces September deadlines on three issues, on each of which he could get himself in political trouble, not only with those on the right and center but also those on the political left.

Only one of those issues is domestic: health care. Obama's speech to a joint session of Congress, scheduled rather hastily for Wednesday night, gives him a chance to turn around public opinion, which has been going against his policies, and to generate something like the enthusiasm his candidacy created last year.

But he faces a binary choice: The president must either insist on a "government option" insurance plan or must let it be known that he will sign a bill without one. House Speaker Nancy Pelosi says the House won't pass a bill without the government option, and leftist Progressive Caucus members threaten to withhold their votes from any such bill. But Senate Budget Chairman Kent Conrad says a government option bill can't pass the Senate.

Sooner or later the old politician's dodge -- "some of my friends are for the bill and some of my friends are against the bill, and I'm always with my friends" – won't wash. As a practical matter, Obama will surely sign a bill without the government option, and the Progressive Caucus most likely can be whipped into line by Pelosi. But the always angry left will become even more angry at their leader when these realities are acknowledged.

Obama may also face a binary choice on Afghanistan. Reading between the lines of stories on Gen. Stanley McChrystal's recommendations, it seems likely that the White House has been pressuring him not to ask for more troops and that he will do so anyway, and with the approval of Defense Secretary Robert Gates. Obama, having already dispatched more troops there, will be asked to double down on a policy that public opinion polls show is unpopular with Democratic voters -- and with some conservatives, like columnist George Will, as well.

Obama is averse to using the V-word (victory) and the American left since the Vietnam years has not wanted to see America victorious in war. They think it makes us look chauvinistic and proud about our nation when we should be, as Obama often has been, apologetic for its sins. But accepting a recommendation for more troops would set him on a course where victory is the only acceptable result, which will make the angry left angry at him.

The third issue on which Obama will need to choose is Iran. Earlier this year he set a deadline of September for the beginning of talks with Iran. Presumably he thought the mullahs would become convinced of his good will by now and that the United Nations General Assembly meeting in New York would be a venue for talks.

But the popular opposition to the rigged Iranian elections in June and the internal turmoil within the mullah regime make it unlikely that Obama will have any reliable negotiating partner. And as George Perkovich of the dovish Carnegie Endowment says, "The Iranians show no sign that they're going to be genuinely prepared to negotiate." They're more interested in getting nukes than in getting to yes, even with a president with an Arabic middle name.

A failure to engage the Iranians will probably not enrage the American left, which tends to see the United States as a bad actor in need of behavior adjustment, rather than a rogue regime like Iran's. But it does raise the awful question, which George W. Bush passed on to Obama, of how to prevent this murderous regime from obtaining and using nuclear weapons.

Septembers often present difficult challenges for leaders. Sept. 11, 2001, transformed and defined George W. Bush's presidency. September 2008 gave us the bankruptcy of Lehman Brothers, the near-collapse of the financial system and the beginning of a deep economic recession. Obama met that challenge better than his rival candidate John McCain by remaining calm, sounding reasonable and cooperating as a minor player with those who were making the difficult decisions.

That won't be enough this September. "To govern is to choose," John Kennedy said, and Barack Obama is going to have to make some tough choices this month -- choices that could antagonize his left-wing base.