Obama May Be an Aloof President 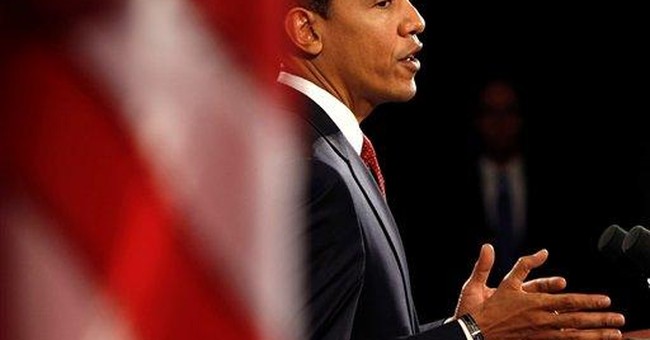 Barack Obama and his family are vacationing in his native Hawaii, far from the wintry snows of Chicago -- and far from almost every other American politician. There's a metaphor here for how I think Obama is going to conduct himself as president: He's going to try to keep his distance from other politicians, including his fellow Democrats. I see him trying to remain aloof from his party, much as Dwight Eisenhower did five decades ago. Like Eisenhower, I think he's drawn the conclusion that his party needs him more than he needs his party.

What's my evidence for this? Well, for one thing Obama didn't do a whole lot of campaigning for his fellow Democrats this year after he clinched the party's nomination in early June. His monster rallies in the fall resembled his monster rallies in the spring: enthusiastic and adulatory crowds inspired by this unique candidate's oratory, without much attention paid to local Democratic officeholders and office-seekers.

Similarly, after the election Obama chose not to campaign for Democrat Jim Martin in Georgia's Dec. 2 Senate runoff -- the election that, depending on how the Minnesota contest turns out, could make the difference between 59 Democratic votes in the Senate and a filibuster-proof 60. Nor did he devote any significant attention to the two Louisiana House runoff elections Dec. 6, both of which Democrats lost.

There were good practical reasons for Obama's non-participation: One of the Louisiana Democrats is under indictment, and polls suggested that the Georgia race was out of reach. But Democratic politicians know that Bill Clinton campaigned for the Democrat in a similar Georgia runoff just after he was elected in 1992. And they may have gotten the sense that Obama doesn't much care to campaign for anybody but himself.

And remember how Obama first came to our attention. Yes, it was a speech at a Democratic National Convention, but it was a speech that dwelled on what we as Americans have in common, not on how Democrats are better than Republicans. It was a speech that did a lot for Barack Obama and very little for the Democratic nominee that year, John Kerry. And when Kerry let it be known in November that he would very much like to be appointed secretary of state by the man to whose political career he had given a decisive boost by picking Obama as keynoter, there was no telephone call from Chicago. Kerry, for reasons that make a lot of sense to me, didn't suit Obama's needs and so will have to make do with being the junior senator from Massachusetts.

Then there was the decision to have Rick Warren deliver the invocation at the inauguration. A masterstroke, I think, for President Obama. It was a signal to evangelical Christians that he intends to be their president, too, and that he sees them as a large and legitimate part of his constituency. But it was also felt, predictably, as a slap in the face by those advocates of gay rights and same-sex marriage who want to ostracize those who, like Warren, have publicly disagreed with them.

The Edison/Mitofsky exit poll tells us that Obama's constituency and the Democratic Party constituency are not precisely coincident. Obama carried voters under 30 by a huge 66 percent to 32 percent margin; he ran ahead of House Democrats among that age group, while running behind House Democrats among voters older than 30. When you look at the state-by-state results, you find evidence that Obama profited from a large turnout by young blacks, many of whom had never voted before and some of whom may not vote again, at least when, as in 2009 and 2010, Obama is not on the ballot. Certainly they didn't turn out in anything like those numbers in the Georgia and Louisiana runoffs.

During the transition period, Obama's poll ratings have soared sky-high, even despite the late unpleasantness of Rod Blagojevich (who was pretty speedily thrown under the same bus as the Rev. Jeremiah Wright). One possible scenario for his presidency is that his poll ratings continue to soar for some time, as Dwight Eisenhower's did for almost all of his eight years.

Back then, many Republicans grumbled that Ike did little to help his party and said, privately, that he was selfish. Eisenhower, I suspect, regarded himself as a unique national figure and believed that maximizing his popularity far beyond his party's was in the national interest. Out there in Hawaii, Obama may feel the same way.