M.D. Kittle
|
Posted: Sep 16, 2020 11:28 AM
Share   Tweet
The opinions expressed by columnists are their own and do not necessarily represent the views of Townhall.com. 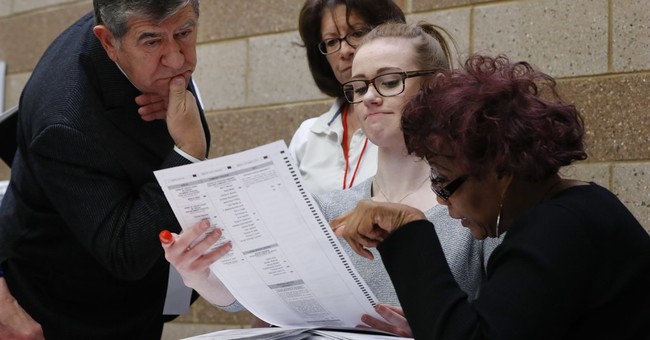 MADISON — Remember when the Wisconsin Elections Commission’s predecessor defended just about every signature scrawled on the 2011-12 petition to recall former Gov. Scott Walker?

The Wisconsin Supreme Court this week ruled to keep the Green Party presidential candidates off the November ballot, with a narrow majority opinion (three liberals and one conservative justice), opining that adding the candidates at this stage of the game would cause chaos in an election that “for all intents and purposes” has already begun.

The ruling follows a 3-3 deadlock by the Elections Commission, with all three Democrats voting to keep the Greens off the ballot. The tie went to the status quo, meaning the Democrats have succeeded in eliminating a source of competition — albeit a small one — for their presidential ticket, Joe Biden and Kamala Harris.

Democrats wanted to stop a repeat of the 2016 election. That’s when Green Party candidate Jill Stein received 31,072 votes, taking many of those votes from Democratic Party candidate Hillary Clinton. A lot of Dems blame Stein for taking away critical votes and handing Donald Trump the victory in a battleground state decided by less than 23,000 votes.

Retired trial lawyer Allen Arntsen, a big donor to Democrats and the party, challenged the validity of the Green Party nomination signatures. His Dem pals on the commission agreed with him, while ignoring critical election law.

In her dissenting opinion, Wisconsin Supreme Court Chief Justice Patience Roggensack wrote that the commission Dems failed to “presume that the addresses listed on the nomination papers were the correct addresses for the dates listed.”

That’s important because state administrative code requires that any information that appears on a nomination paper “is entitled to a presumption of validity.” That is, unless there is convincing evidence to the contrary, election agency officials should err on the side of the signer. The burden, under law, is on the challenger to establish any insufficiency.

“Here, Arntsen’s challenge was based on ‘information and belief.’ He had no personal knowledge of where the (Green Party candidate) lived on what date; therefore his allegation is insufficient…” Roggensack wrote.

During the left’s recall drive against then-Gov. Scott Walker, Democrats demanded election officials at the time presume every signature on their recall petition was good. The state’s election regulator at the time complied with that demand, arguing on behalf that state law, again, required a presumption of validity.

“Democrats on this commission spend a lot of time talking about respecting the choices of voters and making it easy to vote,” said Rick Esenberg, president and general counsel of the Wisconsin Institute for Law & Liberty. “They really didn’t show much respect for it here.”

It was pure political expediency on the part of a party that will do anything to beat President Donald Trump and wrest back control from Republicans. Anything. Even trade in their supposed principles on free and open elections.

“You can argue what happened here is voter suppression,” Esenberg said. “Not because they (the Green Party candidates) didn’t qualify, but because Democrats didn’t want someone who might take votes from Joe Biden. And so they saw a technicality to provide cover to do it.”

You don’t have to wonder long about what the left and their friends in the mainstream media would have done had the Republicans pulled a stunt like this.