Could Camp Randall Be Empty This Fall?

M.D. Kittle
|
Posted: May 23, 2020 12:01 AM
Share   Tweet
The opinions expressed by columnists are their own and do not necessarily represent the views of Townhall.com. 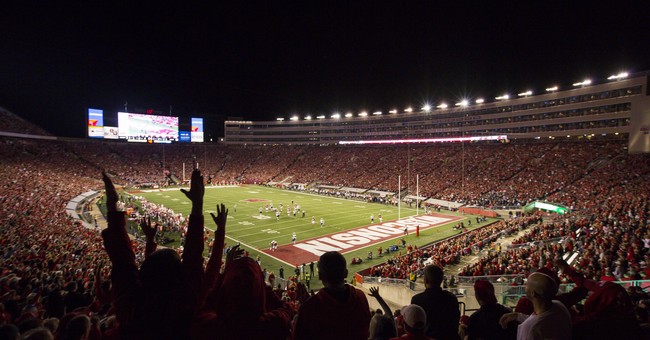 MADISON — There’s nothing quite like a Badgers home football game at Camp Randall Stadium in the crisp fall air.

But Dane County’s stringent, slow, phased-in reopening plan doesn’t allow for the kinds of mass gatherings that University of Wisconsin-Madison home games attract. It could cancel the iconic events —  or at least drastically cramp the Camp’s style.

The so-called Forward Dane plan, really more of an order, laid out by Public Health Madison & Dane County, includes strict metrics for businesses to reopen and for Madison life to return to anything approaching normal. Even if the the COVID-19 reduction goals are met, the plan limits outdoor mass gatherings to 250 people maximum, not including employees, until a vaccine is found for the virus.

That’s 250 people in a stadium that seats more than 80,000 rollicking fans. Closing Camp Randall would punch a huge hole through a significant source of revenue for the University of Wisconsin and its expensive athletic department. And it would sock it to hospitality businesses in downtown Madison and beyond, businesses that have already been hit hard by the Evers administration’s two-month lockdown of the state.

“So many businesses in the Madison area — restaurants, bars, hotels, Uber drivers, you name it — rely on these Badger home games as a piece of their revenues,” said Scott Manley, executive vice president of Government Relations for Wisconsin Manufacturers & Commerce. “There’s a cottage industry built around entertaining people for Badger home games. If the UW isn’t allowed to have Badger home games, those businesses are just going to be destroyed.”

UW spokesman John Lucas in an email told Empower Wisconsin that the local order “does not apply directly to units of a state agency,” but the university will “continue to consult closely with the city and county as conference and university reopening plans continue to develop.”

Responding to a follow-up email asking whether that means the university will hold home football games this fall at Camp Randall, Lucas would not definitively say.

“We’re continuing to work closely with PHMDC and will consult with them as more information becomes available about the shape of a football season,” he said.

In the previous email, Lucas said UW Athletics is aware of the planning phases incorporated into the Forward Dane plan from Public Health Madison & Dane County as it relates to gatherings. He said UW-Madison participates in an ongoing partnership with local and state health authorities.

He said the Big Ten Conference is evaluating plans for a return to competition, “with the health and safety of student athletes and spectators as its most important consideration.”

There’s much at stake.

“Obviously being as close as we are to Camp Randall, that has a huge affect on our fall business,” said Trevor Wilkinson, kitchen manager for Jordan’s Big 10 Pub, at 1330 Regent St., blocks away from the stadium. “We have high hopes that there will be football, but that is as out of our hands as can be at this point.”

Mangers of downtown bars and restaurants who spoke to Empower Wisconsin Wednesday said they’re trying to keep up with local health information that is changing daily. Jordan’s Big 10 Pub, like others, is restricted to curbside service, for now, under the local health orders. Wilkinson said owners hope to bring back some dine-in service, with social-distancing limitations, next Tuesday. The loosening of the restrictions, of course, is subject to change.

The phased-in Forward Dane plan also could stifle Badgers basketball and hockey games. It limits indoor mass gatherings to 100 people maximum, not including employees — again, until there is a vaccine. Again, that could be a matter for UW and local government officials to iron out.

Even in the best-case scenario,  pre-vaccine, restaurants, retailers and other Dane County businesses, will only be able to operate at 75 percent capacity. The plan asserts that, in the absence of a vaccine or treatment, “isolation, quarantine and, most notably, strict social or physical distancing such as public health orders like (Gov. Tony Evers’) Safer at Home” are the preferred method of containing COVID-19. While the creators of the plan acknowledge “the strictest of these prevention strategies” come at a “significant cost” to the economy and community, they are more than willing to turn the screw on an extended shutdown if COVID-19 numbers rise.

“(W)e must not reopen too quickly or without the tools in place to minimize the speed of the virus. Doing so could threaten the progress we’ve made and have more significant health and economic consequences,” the public health policy states.

A Dane County spokeswoman said she was seeking clarification from experts and would be in touch. She had not followed up as of publication.

“Businesses have to stay at 75 (percent capacity) until we have a vaccine, and we don’t know if we will have a vaccine,” the WMC official said. “For those types of businesses, particularly retailers, it’s going to be very, very difficult to remain in business.”