I Got COVID, But Liberal Idiocy Over This Virus Has Been More Damaging

Matt Vespa
|
Posted: Dec 15, 2020 6:00 AM
Share   Tweet
The opinions expressed by columnists are their own and do not necessarily represent the views of Townhall.com. 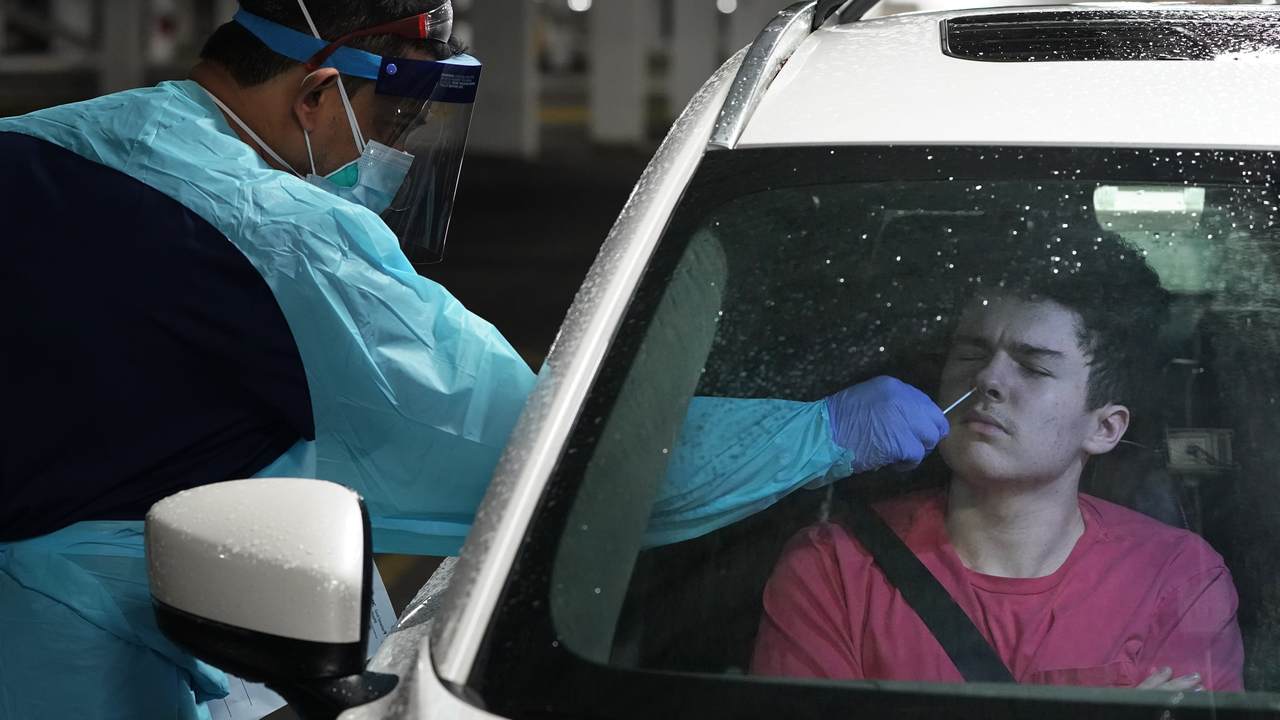 The first week of December, I went into the bunker just like Joe Biden. No blogging. No new episodes of the Triggered podcast. I was shut down. Why? I contracted COVID during Thanksgiving. Luckily, I didn't travel to my parents' house. I just felt it wasn’t safe. My folks are in the at-risk demographic for this disease, so I spent my Turkey Day here in Virginia. For the most part, I went to the places I had been going to for months during the pandemic—and there aren't that many of them. Yet, my car lease was up, and I had to venture to a new dealer—I'd had it with the first dealership I went to in the area—and it was a place I was not familiar with; it was new ground. This hiccup at the end of November also pushed my decision regarding not going to my parent's house. Thank God I decided the way I did.

I don't know how I got it. It's an airborne virus. Luckily, the dealer I met with to hash out a new car deal tested negative, as did everyone at my gym, including the trainers. My friends who I had seen the previous week were also in the clear. As I said, it's an airborne virus. It got me. So, what happened?

It started as a cough the day after Thanksgiving. On the night of November 28, it hit me—hard. By early morning Sunday, I had a fever, chills, body aches, fatigue, and all in all felt like absolute garbage. I knew I was coming down with something—and with a fever, I had a feeling it was COVID. I scheduled a test as soon as I could. The earliest I could get one was Tuesday, December 1. I quarantined until then. When folks who had arrived later than me got their results and drove off—this was a drive-in testing site—I knew there was probably going to be bad news. Indeed, it was. I had to contact everyone I had seen in the past week. Nasal congestion, sinus pressure, a slight headache, loss of appetite followed. By day six, taste and smell were totally gone. Lifting my head to check the time was a chore in itself due to the fatigue. It feels like a two-ton weight is sitting on your head.

It sucks, folks. It's not something you want to get, even though the vast majority of those who contract it will recover. I've had the flu. This was worse—and it was a 'mild' case, which pretty much means I didn't need to go to the hospital. The vast majority of COVID cases are 'mild,' which is good news. Even cases that are slightly more severe can be resolved from home, barring any changes regarding breathing. That doesn't mean I didn't need to check my oxygen levels via an oximeter, especially days 7-10 when, for lack of a better term, the virus decides whether or not it'll send you to the hospital via respiratory issues. I reached out to other friends who I saw had got infected with COVID. They're doing fine. They're on the mend, but they had some scares. Some went to the hospital. It impacts people differently. And yes, you bet I'm getting vaccinated when it's available for my age group.

I don’t want this again.

So, I got COVID. It kicked the crap out of me, but I survived it. Millions more will survive it. And we still have liberal idiots peddling nonsense and outright trash about this pandemic. For starters, let's start with President Trump's greatest domestic accomplishment: Operation Warp Speed. We have two COVID vaccines primed and ready to go. The one from Pfizer is already being distributed. Moderna's is next. The vaccine is reportedly 95 percent effective. And yet, the liberal media fact-checked Trump’s claim of a vaccine by the end of the year. CNN ate the largest helping of s**t for their skepticism. Never ever bet against America. The media did, but that’s an industry that’s not filled with patriots. The liberal media are just two-buck back alley whores for the Democratic Party. They hate America. They wanted the death toll to rise. They didn’t want a vaccine because they knew one would increase the chances of Trump winning re-election. Now, we have vaccines rolling out, and they’re still unhappy.

In an alternate reality where it's a non-election year, and Trump isn't president, we would have had a more grounded response to this virus. Instead, we got a COVID panic porn show with hardcore action not seen since Deep Throat. Okay, maybe that's a bit much, but the silly season has not ended. Rep. Eric Swalwell (D-CA), the biggest doofus on the Hill who was recently caught allegedly screwing around with a Chinese spy, tweeted at the outset to "stop wearing masks." Now, it's the basis for the COVID Karen regime. I'm not saying you shouldn't wear them. You should when inside and around a bunch of people, but it won't prevent you from getting COVID. I know this firsthand.

Then, the experts said no vaccine at the end of 2020. Wrong. Then, the experts said we can't re-open because it's dangerous but attending a Black Lives Matter protest is okay because racism is just as bad as COVID, which is insane. Here in Virginia, there's a curfew from midnight until about 6 A.M. Right, because the virus is only transmittable during those periods. It's science, right? Clemson quarterback Trevor Lawrence, who is going to be the number one pick in the NFL draft, tested positive before a Notre Dame game, couldn't play, but…could travel with the team and be on the sidelines? How does that make sense? California Gov. Gavin Newsom shut down the state but absconded to Napa Valley with his wife for a ritzy dinner with friends and members of the medical community. No masks and no social distancing. Denver Mayor Michael Hancock urged his residents not to travel for Thanksgiving…only to board an airplane to fly cross country to see his family.

Look, it got me, so I know it's bad. I knew it would be no picnic even before I contracted the virus. But I can see why so many people flout the rules. It's because those who are supposed to lead us don’t give a s**t either. New Jersey Gov. Phil Murphy got busted. New York Gov. Andrew Cuomo had to torpedo his Thanksgiving dinner with his family after he was caught trying to skirt around his own lectures to residents about sacrificing their holiday plans. Some of these Democrats are boomers and don't get that everyone has a phone. Everyone has access to social media. And them getting busted will spread faster than COVID ever could.

.@BillGates on Covid: "Even through 2022” we should be prepared for life to not return to “normal”

Says “sadly" it’s "appropriate” for bars and restaurants to close over the next "four to six months" pic.twitter.com/cmDD8pv3XR

You can't lock things down when you don't know anything. Period. And now, we have Bill Gates offering his two cents. Why? He's not a medical expert. Oh, right, there's the Bill and Melinda Gates Foundation, which still doesn't negate the fact that he's not a medical doctor and doesn't know s**t about COVID. He doesn't, but he does well in peddling the agenda the Left really wants; the destruction of our economy. He said that we can't return to normal until 2022 and that it's sad that bars and restaurants have to close for months again, but it's "appropriate." It must be nice to sit on $50+ billion and not have a care in the world, Bill. And this is precisely why people like Bill can't dole out advice because everyone else is dead under this agenda. Not from COVID, but from depression, suicide, drug overdoses, and any detrimental emotional impact that accompanies hitting someone trying to feed their family and sees their job or their business disintegrate overnight. Bill, you're not like the rest of us, so please shut up. I can work from home. I'm lucky, but I'm also aware that many Americans can't, especially in the restaurant business. Shutting down for that amount of time is death. And all of this from an expert class that's increasingly handing out bad advice over the fear of not being "woke."

You don't need a medical degree to know that you can contract COVID at any large gathering. Being at a BLM protest because you hate Trump and are a white liberal who has nothing better to do doesn’t make you immune from COVID. Again, this is where the idiocy permeates the media landscape. Melinda Gates is not happy that Americans and first-world nations have first dibs at the vaccine. Shut your face, lady. You people keep reminding us of the death toll. Well, we have a vaccine. We're going to distribute it. And you people can shut your whore mouths for a second without offering another lecture based on your pseudo-intellectual talking points about so-called neocolonialism regarding how this vaccine is administered. You have to be an especially miserable breed to even think like this, but there are tens of millions of people who do. They’re called Democrats.

So, for the rest of you folks. Be safe. Believe me, you don't want to get this virus. At the same time, I know that the recovery rate for the vast, vast majority will be immensely high. And we have a vaccine on the way. Then again, the idiocy from the liberal media, the so-called experts, and the Democratic Party regarding COVID will be more damaging than whatever the virus dishes out.

Teachers and their unions are just being abjectly lazy at this point. And if you read why we can't re-open, well, I can tell you it seldom has anything to do with COVID or safety. They rail about misogyny, racism, sexism, police brutality, and other aspects of "woke" left-wing America.

Um, how about you get back to work? And this is why public-sector unions are a bad, bad thing.