While Nation's Eyes Are on Ferguson, Justice for Injured Toddler Is Ignored 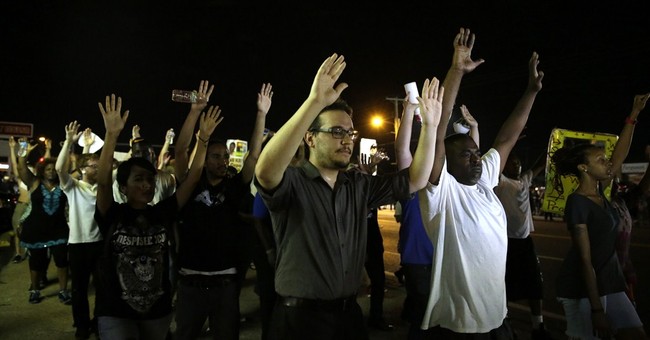 The details about the death of Michael Brown and the actions of the Ferguson, Missouri, policeman who shot him remain very much at issue. There are too many theories and longstanding feelings, ranging from race relations to support for law enforcement, for any columnist to properly take a stand on the matter.

But one thing seems clear. The entire national media and hundreds if not thousands of people have taken to the streets of Ferguson to protest or report on a potential injustice.

At the same time, in Georgia, a young child, whose face was left hideously scarred from a SWAT team's flash grenade, has no protesters marching for him. This, even though the county whose sheriff's department caused this painful disfigurement of the then-19-month-old toddler just announced it would not pay for his extensive medical care.

When bad guys are up to no good, particularly when they appear to be in struggles with police officers, possibly even rushing them with at least the threat of doing bodily harm, then the use of force by law enforcement often can be justified. When a potential lawbreaker appears to be surrendering to police, that's a different story.

We still don't know which is the case in the death of Michael Brown. That means the protestors don't know either, and that includes the huge contingent of protestors not from Ferguson. They have decided to join "the cause," but many locals look upon them as "outside agitators."

This case will have to go through a long judicial process. It's destined to be one that will attract every news camera and activist within reach. In the end, most reasonable people would ask that justice be carried out, regardless of whether it pleases the press, protesters or the police.

But in Northeast Georgia's Habersham County, there appear to be no national media and no civil rights protesters taking to the streets -- not that such behavior is needed or desired. But this is just the point: One can make a stand for justice and fairness without looting stores or tossing bottles and small explosives at law enforcement officers.

Consider the case of young Bounkham Phonesavah, who has affectionately become known as "Baby Boo Boo." In May, the toddler was asleep at home with his parents. On a tip from a confidential informant that drugs had been purchased at the home, the local sheriff's department's SWAT team conducted a raid. It included the use of "flash" devices, used to confuse criminals while law enforcement enters a location. Unfortunately, the law enforcement officials were unaware that a young child was in the home, and the device landed and ignited right on Baby Boo Boo's face.

No drugs were found, and reports say that officers did not find the person of interest reported to have been selling them from that place. But the young child was left with horrible wounds that required substantial medical procedures. And even as he has now left the hospital and has moved back to Wisconsin with his family, photos of him suggest that he will require more surgery to have a hope of correcting his disfigurement.

This is not a story about local law enforcement in the county where this happened. It might be, down the road, as an investigation continues. But for now, this might not even be about the Habersham County Board of Commissioners, which, on advice of legal counsel, said that it was not permissible for the county to pay for the toddler's extensive medical bills.

Instead, this is a story about protest -- about how some protests apparently can sometimes lead to rushed decisions, and sometimes even rushed legislative action to turn a perceived wrong into a right, even before the facts are clear.

But in the case of this poor young child, there are no "community activists" taking to the national airwaves, demanding that, if the laws don't allow a county to pay for what at the very least was a tragic error, those laws should be changed immediately. Baby Boo Boo and his family have been left traumatized and scarred for life.

Those who so crave justice might consider this child. His innocence is unquestionable.