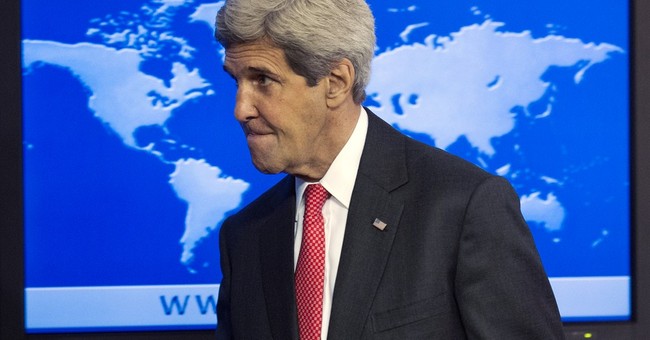 With every word spoken and every roll of his eyes, U.S. Secretary of State John Kerry makes it clear that the Obama administration is no fan of Israel. So why is it that media will not call the White House on this major shift in American foreign policy?

The most convincing evidence was Kerry's hot-mic comment about the accuracy of Israel's "pinpoint" missile launches, which have been an effort to deter Hamas from its never-ending attacks on Israel, including its civilians. Since then his disdain for Israeli Prime Minister Benjamin Netanyahu has been more camouflaged, but evident nonetheless.

Perhaps Kerry and President Obama would see things differently if a neighboring nation to the U.S. took the trouble to dig tunnels that opened up in American territory, allowing terrorists to attack the country from the inside. That is exactly what is happening in Israel. It's a nation that has long been under siege. And until recently, it has always been able to count on strong support from the U.S. government.

There is no other side to this story. It's true that Israeli rockets have sometimes missed intended targets here and there, leading to the tragic deaths of innocents. This sad inevitability has been a recurrent theme in this decades-old conflict. What apparently has changed is U.S. support for this important traditional ally in a dangerous region.

One could say that many American supporters of Israel are reaping what they've sown. Opinion polls show over and again that most Jewish Americans support Democratic candidates for the presidency and other offices, just as they have largely supported Obama. That, of course, is their right. It may be that there are other, overriding issues that they consider more important than Israel. But if a safe and strong Israel is high on their list of priorities, these voters now have a stark choice to make.

Of course we can't be too shocked with the reaction of the White House to Hamas' tunneling past the borders of Israel. The Obama administration has, in effect, opened U.S. borders to "refugees." These illegal immigrants have their own compelling stories, but their wholesale entry into this country appears to be well beyond anything contemplated under U.S. law.

Take Israel's thumbing its nose at Secretary Kerry, and throw in Russian President Putin's rogue defiance of international norms in his country's interference in Ukraine, and what is emerging is that the Obama administration has less and less respect from other nations, and little regard for our own laws.

The intent of some Republicans to pursue impeachment of President Obama is likely well-intended, but somewhat misguided. With more than two years left in Obama's presidency, an impeachment effort would trigger the same circus, and the same whipsawing of public opinion, that we witnessed in the Clinton years.

Instead Republicans should be taking their case to the American people; and in the case of Israel, the GOP should ask loyal Democratic voters if they should question that loyalty, given developments in American foreign policy. This would not be a matter of playing politics with policy, but, to the contrary, a way of influencing important policy through politics.

It's clear this administration treats Israel as a lesser equal among nation states. Were this any other nation's territory, the digging of tunnels by terrorists would meet with resolute opposition by the U.S.

Perhaps if the American people continue to put in power leaders who seem unsympathetic to the plight of Israel, then those leaders should simply have the guts to say the longstanding alliance between America and Israel is over.

If that should become the case -- diminishing what has been a true friend on the international stage to the status of an irritant -- it would be one of the gravest mistakes this nation has ever made.