Flighty Florida Gubernatorial Race Could Be Decided by This "Obscure" Issue 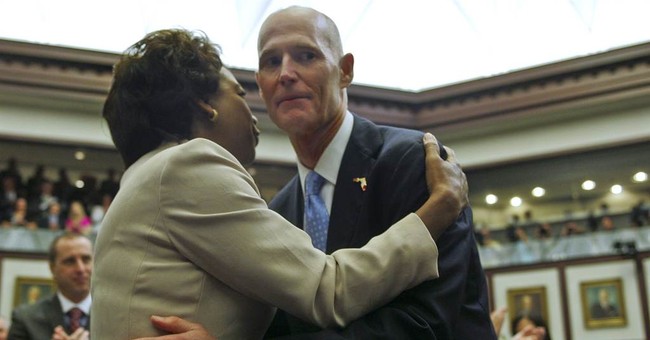 Not long ago, Republican Florida Gov. Rick Scott had been written off as politically dead. Just several months back, the incumbent Scott trailed in the polls to Democrat Charlie Crist.

Crist is the former Florida Republican governor who then ran unsuccessfully as an independent for U.S. Senate. And now he's running for governor again -- this time as a Democrat.

Many pundits believe that any of a number of the "big ticket" issues will decide the race. Chief among them is Crist's unabashed support of President Obama. As pointed out in a recent analysis by the Wall Street Journal, this policy tack by Crist is designed to demonstrate to loyal Florida Democrats that the former Republican Crist is now foursquare behind Democratic policies and politicians.

Just as predictably, the GOP in Florida is hammering Crist in TV ads, both for his buddying up to President Obama, and for his apparent habit of running frequently for office under whichever partisan banner is most convenient at the time.

For many years Florida has exemplified the nation's partisan political divide. Statewide elections are often very close, not infrequently coming down to how the vote goes along the I-4 corridor that runs roughly from the Tampa Bay region eastward to Orlando and then to the Atlantic coast.

The swing counties that make up that I-4 corridor more and more have slipped in recent election cycles into the Democratic column, especially in presidential elections. That makes heavily Republican areas of the state all the more important to the GOP in any statewide contest. One of those areas is Southwest Florida's Lee County.

And while Crist must fight off the obvious negatives of an unpopular Obama, Republicans must hope that every issue possible goes their way. And in recent days, a seemingly inconsequential one definitely went against them.

Lee County, with a population of more than 600,000, is the home of Fort Myers. It's a critical part of a Scott victory plan. Significantly, it's also home to about 11,000 property owners who have lost their citrus trees to a state/federal program that used state powers to remove trees over the last decade.

The laudable goal was to save Florida's renowned citrus industry from a quickly spreading form of canker that afflicted some trees. But the program arguably went too far. It mandated that any citrus tree within 1,600 feet of an infected one had to be removed. Landowners with these trees had no legal recourse.

Make no mistake: Floridians take their fauna seriously. But they also take seriously the land it is situated on -- in this case, their own land.

In several other Florida counties, large jury verdicts were awarded against the state for having, in essence, wrongfully taken the property of citizens under what was deemed an untenable legal reasoning.

Until now, those verdicts meant nothing to Republicans in statewide office, or to a GOP-dominated legislature that turned a deaf ear to any measure that would fully compensate these tree owners. The fact that both verdicts were in decidedly Democratic strongholds likely took the issue completely off the GOP radar.

But the Lee County verdict of over $8 million dollars against the State of Florida is a different matter. Most Lee County voters, and thus most jurors, are conservative Republicans. The smack-down the state suffered from 12 jurors there was telling. Only two types of cases in Florida require a 12-person jury. One is a murder case. The other is the taking of private property.

If anyone doubts how quickly property rights can ignite voters, they should note the recent spat between a cattle rancher and the federal government in Nevada. And unlike in Florida, that wasn't even private land!

Ominously for the GOP, the next trial is scheduled for Orange County, which is right in the middle of that I-4 corridor. Some 15,000-20,000 property owners are looking for a verdict similar to the one in Lee County.

So far neither Scott nor Crist has taken a public stand on this seemingly obscure issue. But by November, will it be Obamacare or private property rights that provide the tens of thousands of extra votes necessary to win the governor's race in this, the land of citrus trees?