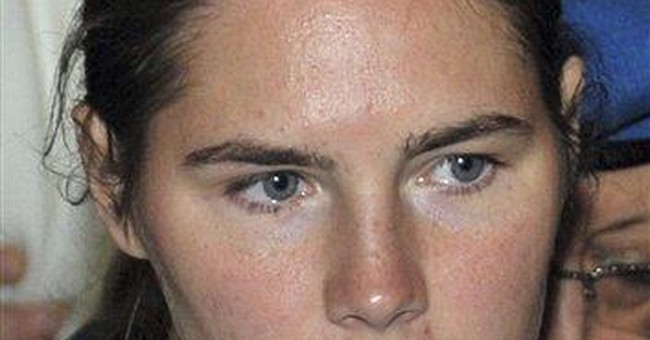 Italy is a nation with long stretches of lovely landscapes and volumes of rich history. I've always longed to return there -- that is, until I watched in horror at the kangaroo court that was the trial of American Amanda Knox. It's a classic case of anti-Americanism gone wild.

The story unfolds around the murder of British exchange student Meridith Kercher, with whom Knox, an overseas student, shared a flat. Knox had the misfortune of rooming with Kercher, who had the far greater misfortune of having been brutally slain in 2007.

The gist of the case against Knox was that she, her Italian boyfriend and two other men somehow tried to entice Kercher into some kind of sex game that Kercher wanted no part of. Knox and her boyfriend ended up facing murder charges. The other two men, both acquaintances of the others involved, were also charged with being a part of a murder conspiracy. One of these two men entered an early plea in the case. His story was that the victim had consensual sex with him, following which, he said, he was in another room when an intruder entered the premises and attacked Kercher.

As for Knox, prosecutors claimed that she was a willing participant in the forced sex game. They said that when her roommate wouldn't play or -- in the alternative version of things, when the time came to get some sort of demented high through bloodshed -- Knox either killed Kercher with a knife, or at least she was there when it happened, and did nothing to stop it. (Police later found the knife in the apartment of Knox's boyfriend.)

By virtually all accounts, there was no concrete, direct evidence suggesting that Knox was in the room inside the apartment the two girls shared when the murder happened. Yes, Knox's DNA was all about room. But that stands to reason, given that she and Kercher were roommates.

The only link of any significance to Knox was an amount of her DNA on the knife handle that was arguably too small to be conclusive. Of course it only stands to reason that Knox might have used that knife for legitimate purposes in her boyfriend's kitchen. Keep in mind that this alleged murder weapon was a length that was inconsistent with many of the wounds found on the victim's body.

The Italian press had a field day sensationalizing the murder and portraying Knox as a girl with an angelic face and a demonic temperament. The trial seemed interminable, and was conducted by a prosecutor who is already facing charges of prosecutorial misconduct in another case. The entire investigation was riddled with chaotic blunders that would have led a U.S. court to balk at conviction.

There is also good reason to believe that once Knox was arrested, she was questioned for hours without benefit of counsel and beaten several times. Her supposedly odd "devil-may-care" attitude after the murder but prior to her arrest was in fact manufactured by the Italian press. These media derisively labeled the American "Foxy Knoxy," which became the common nickname for this supposedly brazen (and murderous) exchange student.

It's hard to take the Italian justice system seriously when the chaotic situation surrounding the Italian government is considered. In the news now is an attack on that nation's controversial prime minister, Silvio Berlusconi. (He was hit in the face with a statuette.)

If you think that's an unfair judgment, consider this: Several members of the jury returned to give their guilty verdict adorned with sashes the colors of the Italian national flag. As best I can discern from my research, this was purely a gratuitous act by the jurors, to the effect of: "We stand by our press and our prosecutor. And no matter how scant the evidence, we're putting that American girl away!" Yep, it seems that clear.

Dear readers, do you believe in your hearts that America should bend over backward to afford dangerous terrorists all the protections of our great judicial system, while at the same time leaving a young American girl stranded in a nation where alleged "crimes of passion" turn into "trials of passion?"

No, there won't be any travel to Italy anytime soon by me or mine. And I urge anyone who cares about the freedom and safety of their families or themselves to take the same view.