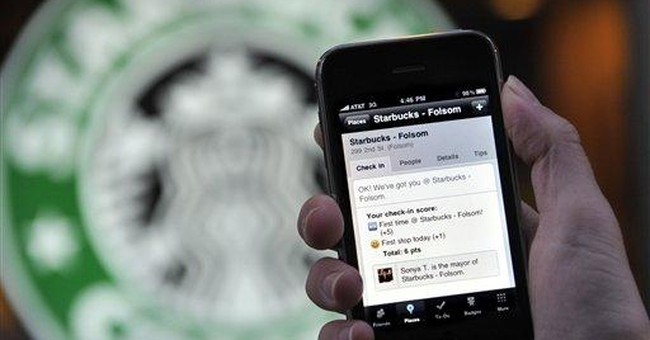 Yeah, I know. This looks like another "I'm thankful at Thanksgiving" column. Well, it is and it isn't.

What I'm most thankful for is that I grew up in a time when there were no cell phones or emails. Until I was a teen, there were hardly any cable TV channels, either. And yes, airing these thoughts conjures up similar talk from my own father, back when he talked about listening to radio programs when he was a kid. I often wondered why that made his youth better than mine. Now I know.

I suppose the nation's uptick in advanced technology is good in that it opens doors to increased economic productivity, and often connects us to other people when otherwise we'd be all alone. But there's also a downside that we're now witnessing in both our culture and our politics.

During the '60s and '70s, TV already had become the "boob tube" that turned many of us into couch potatoes. There were only three networks, though, plus a handful of independent stations and also transistor radios.

If you wanted to talk on a phone, you had to do it at home. Then you had to hope the person you were calling wasn't already on their line, in which case you'd get that annoying "busy" signal. That meant your friend or family member was engaged in -- believe it or not -- an uninterrupted, person-to-person conversation with somebody. Nowadays, there are so many innovative ways to interrupt us that I won't bother to list them.

And when you aren't blabbering today by electronic devices with friends, you're probably surfing among more TV channels that you can count, much less watch. Yet with so many choices, many of us end up watching yesteryear's reruns. Go figure.

All this clutter has done more than just fragment our social interactions. It may have started to condition us to be more easily controlled by outside, institutional forces, such as government. Most kids today rarely touch a newspaper or watch TV news.

With exceptions, of course, there are now too many young and even middle-age Americans that absorb important information about the world from various uncoordinated sources that, together, offer a viewpoint that is abbreviated and jumbled. Life starts to look like a pile of jigsaw puzzle pieces that no one is bothering to assemble into a coherent picture.

An outcome of this is that ignorance about history and world affairs starts to increase. We start to rely on "Cliff's Notes" versions of past and present events. It starts to get easier to persuade people that concepts like individual liberty, free enterprise and political independence -- ideas that created and have sustained America -- are no longer important.

And so at the end of 2009, we find ourselves inhabiting a world dominated by Twitter, Facebook, instant messaging, emails, Internet sites and TV snippets on everything from cable news to entertainment channels. These technologies may be starting to constitute a collective "weapon of mass distraction." And a distracted people are a people more susceptible to having government regulate most everything in their lives.

Especially when they have held the reins of power in recent years, there have been plenty of Republicans in both Congress and the White House that have taken similar advantage of the public's tendency to look the other way while politicians regulate something new and something more. Ditto for many GOP-dominated state legislatures.

The conditions for this government reaching into our lives have been cultivated by the speed of light that our lives now move at, thanks largely to electronic media. As with actual jigsaw puzzles, all the pieces look too much the same.

So yes, I'm thankful for being able to appreciate simpler times from having grown up in one such era. Back then we still had government ambition, as with President Lyndon Johnson's "Great Society" social engineering. But at least then we had time to taste big notions like that one before we were told to swallow them.

As we head into 2010, it looks like the best chance America has for a stable and prosperous future is for all of us to ignore the distracting "call waiting" prompt our electronic culture so rudely thrusts upon us. At least then we have a fighting chance to sustain a dialog about our own futures.