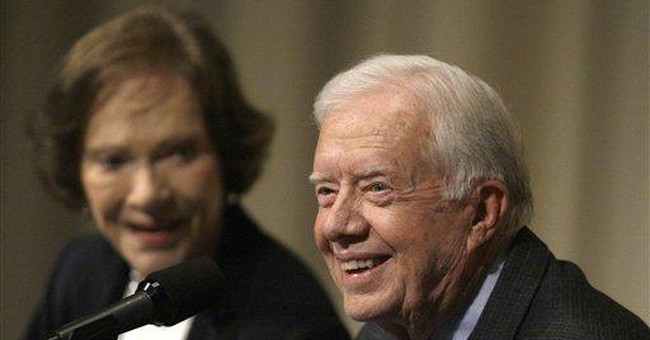 The irony stems partly from the timing of all this: Just days after the incident, Carter's former press secretary Jody Powell died. Perhaps more than any other Carter aide of yesteryear, Powell helped the Carter White House to conquer a Washington establishment that had a bias of its own against Southern politicians.

Nothing is harder for me to write about than Jimmy Carter. I grew up circulating among his closest aides while he was Georgia governor. I swelled with pride when he won the presidency. And even with my own career background of having written speeches for Mack Mattingly, the man who became Georgia's first Republican U.S. senator in a century, and of having done debate preparation work for Newt Gingrich, I've still been more willing than many to point out some of the positives from the Carter administration.

For example, Carter's fascination with technology helped push America to become enough of a technocracy that we can now take out al-Qaida leaders with unpiloted air drones. And it was Carter's continuation of the "conservative" policies of his two Republican predecessors to support the shah of Iran that led to the central failure of Carter's years as president -- the protracted holding of American hostages in Tehran.

All of this notwithstanding, I'll confess that not in my wildest dreams did I ever guess that the Carter I've known since his days at the Georgia capitol building would become the champion lightning-rod ex-president of all American history.

Sometimes I wish he would have gotten these impulses out of his system by staging his own career comeback as a third-party presidential candidate, a la Teddy Roosevelt. Instead, Carter has become an unofficial -- and often unwanted -- emissary across the globe for every president who has followed him.

Now he has opened a can of worms that inevitably will spill disproportionate harm on Republicans, conservatives and the people of the same part of America that propelled him to the White House -- the Deep South.

I have little doubt that President Carter is correct to point out that some people oppose all things Obama primarily because they can't get past his race. That's undeniably regrettable. But to suggest that these people's numbers are "many" is to make an unverifiable assumption.

Maybe it's now appropriate and necessary to explain that I think Carter feels compelled to delve into the subject of Obama and race because Carter seeks a measure of atonement for himself.

Few know it, but Carter ran for governor of Georgia in 1970 to succeed Lester Maddox, a man labeled by most political observers of the time as a segregationist. I knew Maddox personally. Prior to his death in 2003, I persuaded him to offer an apology of sorts for his actions of the 1960s. Then he promptly denied he had said what he told me when his words appeared in a newspaper column I wrote.

There will always be debate among Maddox's friends and acquaintances whether he was a devotee of states' rights, or just a bigot. It's important to know that Gov. Maddox appointed a great number of blacks to state government positions. Nevertheless, what mattered the most in that era was that the South was not fully racially integrated, and Maddox was a symbol and a rallying point for those in Georgia who opposed forced federal desegregation of housing and schools.

Enter now the "atonement" concept. There isn't a living political expert from that bygone era who doesn't know that gubernatorial candidate Carter -- running against the progressive Carl Sanders -- said many times in public appearances that he was a Lester Maddox Democrat. That doesn't mean Carter was spewing racial epithets. It does mean that he "played the race card" himself to get elected.

What's unfortunate is that Carter now has chosen to flip that race card over and play it for the opposite effect he sought a generation ago. Though no racist himself, Carter now perhaps is seeking atonement for his campaign rhetoric of years past.

But that doesn't explain why he presumes that those who oppose ObamaCare or other potential government expansion programs are racists. Can't people justifiably feel that Obama has become something different as president than what he promised as a presidential candidate? Remember that more than enough Americans cared little enough about Obama's race to elect him president.

I won't stop pointing out to Carter critics that he inherited a dismal economy from Republican President Gerald Ford and his economic advisor Alan Greenspan. But I wish President Carter had another Jody Powell around these days to help counsel him about what "observations" to go public with. Otherwise, the instinct for atonement can divide us more than unite us.