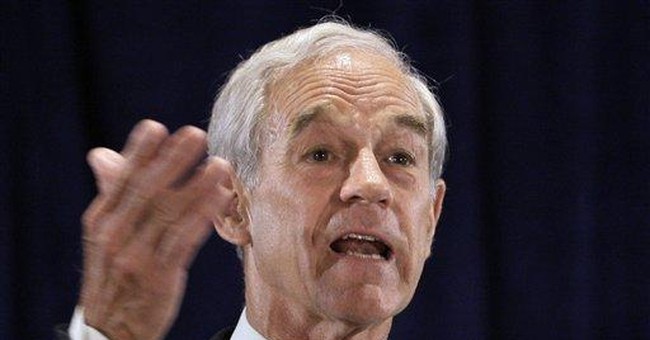 It is considered dangerous in the mainstream media ever to reference Congressman Ron Paul of Texas as anything but a political anomaly. Well, here I go about Paul, just as I did in my new book, "Paranoid Nation," in which I discussed the impact he had on the 2008 GOP presidential contest. (And no, I'm not calling Rep. Paul paranoid).

In November 2007, I was in the pressroom after the CNN/YouTube Republican debate in St. Petersburg, Fla. That was the night Mike Huckabee stole the show with his comment that Jesus was too smart to ever run for public office. One has to take into account the fact that the debate was taking place in a metropolitan area that had already seen housing prices plummet and home sales dry up. Yet not one candidate raised the issue of housing or the impending financial crisis.

Actually, there was one candidate that night who focused on where the nation was really headed. Attacked and derided by the more "acceptable" GOP candidates, it was Ron Paul who warned that America was "going bankrupt" and that our infrastructure was decaying. He also harped the loudest on the need to cut spending.

Throughout the 2008 campaign, Paul kept telling anyone who would listen that the nation was literally printing money to pile up massive debts, and that there would be a major price to pay for Congress and the president being asleep at the wheel.

Now look where we are. We are spending money faster than we can print it, our nation really is going bankrupt, and Congress is being forced to deal with real issues such as infrastructure even as it pours massive amounts of pork into a stimulus bill that in reality has turned into the largest appropriations bill ever passed. It's a bill that was cobbled together in haste by a Congress that didn't even realize we were in trouble as late as November 2007.

Not all of Ron Paul's ideas were on point. But his general theme proved to be right on. And the Republicans ran the exact sort of milquetoast general election campaign that I expected. No theme and no passion.

Now Paul is taking another position that puts him at odds with his party's traditional stand on a controversial issue -- Cuba. Paul has co-authored legislation with several Democrats to allow travel by American citizens to and from Cuba.

That will anger many in the Cuban-American community who believe that punishing the Castro brothers is still critical. Maybe. But let's look at the other side of this argument.

The United States has had an embargo on Cuba for decade after decade. The Castro regime has managed -- with help from various friendly communist nations and others -- to stay alive the whole time.

Paul and others who support the bill believe that as Cubans see the modern conveniences that Americans carry with them, and as more Americans spread the word of how life in a democratic republic is -- even in a darn-near depression -- that Cuban citizens will start to want to see life in their country change as well.

I have no opinion as to which side of this particular argument is correct. But it is clear to me that the Castro boys are on their last leg, and there are many who would not be shocked to see the island liberated in the coming years. If American travel there would contribute to that liberation faster, then Rep. Paul would once again have taken a position unpopular in his party but correct in its assessment.

While Ron Paul may not be everyone's cup of tea, I have to hand it to the man for being willing to take tough stands on issues. I well remember several of the Republican presidential candidates smirking as they listened to what they perceived to be Paul's "conspiracy theories." Well, they weren't conspiracy theories. They were, for the most part, realistic assessments by a guy who wasn't afraid to speak out.

Perhaps the Republican Congress has taken a little more of a Ron Paul approach to issues as well. With the exception of a small handful of the usual suspects, they stood together against a stimulus bill that may have been well-intended when it started as an infrastructure "put-people-to-work" piece of legislation, but then turned into a monster once it went through Congress.

Perhaps Paul's colleagues should spend more time listening to his views. They may not all be on the mark, but when it came to this financial collapse, Paul nailed it.