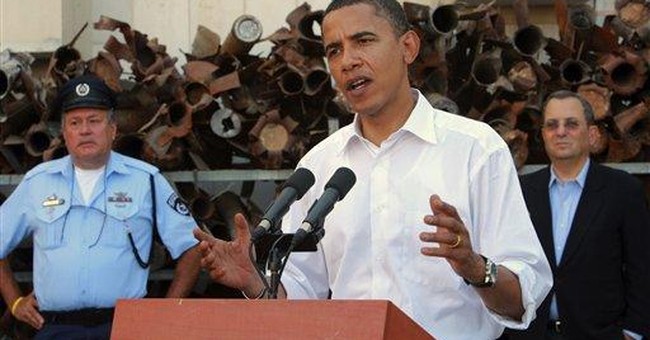 The media already have gone over the top with their coverage of Sen. Barack Obama's international man-of-mystery tour. The endless photo sessions with the troops, foreign leaders, waving crowds -- it's just the most contrived pack of junk I've ever seen.

But shame on the folks running the McCain campaign. They knew this week of endless glory for Obama was coming. Their response? They tell McCain to attend a baseball game, hold another boring town-hall meeting, have his photo taken with another Bush, and visit an oilrig. Sounds like the work of strategists bound and determined to destroy their candidate.

Did it not dawn on the McCain campaign that while Obama was running around trying to play Henry Kissinger, they could have created a major summit of big names to discuss how to deal with the economy? It could have been held somewhere like Omaha. The press would have been obligated to cover every meeting and speech, just as it has with Obama's world tour. The simple theme of this domestic policy extravaganza could have been, "We already have the meat when it comes to foreign policy (McCain); now we are serving up more on the issue Americans care most about their wallets."

But no. No sizzle for their candidate. Instead, just endless whispers in his ear that the only way to counter Obama's new foreign mojo is to name a GOP vice-presidential nominee, and quick.

Oh, and who might that be? What a coincidence! It's Team Bush's No. 1 guy, Mitt Romney.

I've seen this hustle before. Remember the 1980 GOP convention, when Ronald Reagan was rushed into picking George H.W. Bush as his running mate? Reagan got scared when Gerald Ford interviewed on TV with the believed paragon of journalism at that time, CBS's Walter Cronkite. Ford basically hinted that he would run on the ticket with Reagan if he were to be given real responsibilities (aka a co-presidency). Reagan went with the Bushes. Will history repeat itself?

So for the wilting McCain, his campaign gets an "F" for sizzle.

Now what to do with Barack Obama's version of "where's the beef?" If you carefully followed several of Obama's interviews overseas in the past week or so, he was hardly Churchillian in his ability to reconcile his newly minted worldviews with those of his recent past.

He looked presidential, but so does George W. Bush. And look what that's gotten him -- one of the worst approval ratings in history.

What Obama needs is to wipe away the East Coast Harvard, wet behind-the-ears image he has on the world stage. He could do that with some deeds that speak louder than even his considerable oratory does. For a potential running mate of his own, Obama could choose former Georgia Sen. Sam Nunn, who provides Obama more "beef" in the area of foreign policy than a one-week "tour of duty" ever could.

At the same time, he should be working to assure America that having Caroline Kennedy running the vice-presidential selection committee isn't just another reaffirmation of the northeastern wing of the Democratic Party's endless efforts to dominate its party.

Nunn is older. He's a little staid, maybe. Definitely an intellectual. His years in the Senate gave him leadership expertise beyond compare on foreign policy. And he's spent the last years chasing down rogue nuclear weapons, the very foreign policy effort Obama claims as his most important project.

Nunn would deliver to Obama a soothing dose of Southern middle-of-the-road credentials. That could help in potential new swing states like North Carolina and Virginia. It would all but seal the deal for Obama in Nunn's home state of Georgia. Why? Because the largest growth of the GOP in that state comes from parts of middle Georgia, where Republican Gov. Sonny Perdue calls home, as Nunn does. That's where Sam Nunn is still known and revered by otherwise GOP voters. Those Republican voters might be persuaded.

The race is already close in Georgia, with its high black voting age population and younger voter profile. Obama could have a shot at winning the electoral votes in one of the 10 biggest states in the nation.

Nunn has little sizzle to offer. But he is the solid steak that Obama needs.

As for McCain, letting him wander aimlessly around a stage with a microphone in his hand taking potshots from a crowd is not my idea of great strategy.

One town-hall participant did make a good point, though. He told McCain that the McCain volunteers were working harder than the paid staff was.

Put that guy in charge.