Matt Barber
|
Posted: Sep 25, 2016 12:01 AM
Share   Tweet
The opinions expressed by columnists are their own and do not necessarily represent the views of Townhall.com. 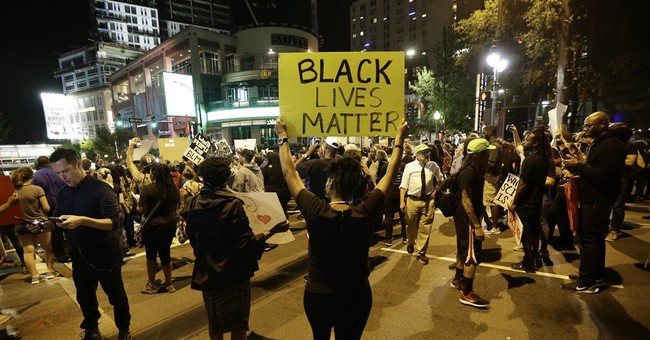 It’s often said, “There is only one race – the human race.” While the phrase has become almost cliché in repetition, it happens to be 100 percent accurate, both scientifically and theologically speaking.

From Ferguson to Baltimore, Tulsa to Charlotte – and on college campuses from coast-to-coast – a great divide is sweeping America. It is fueled largely, if not entirely, by half-truths and outright lies. Truth is irrelevant. Only the narrative matters. When “Hands Up Don’t Shoot™” can do so very much to further “the cause,” it matters not that it represents a holocaust-denial-level of detachment from reality.

Which tells you everything you need to know about the cause.

This is by design. These embers of racial division are purposely fanned to a red-hot flame by certain political leaders, “social justice” warriors and “community organizers” (cut principally from the same ideological cloth) in order to permanently ingrain a turbulent level of cultural division based solely upon the varying shades of people’s skin. This, in turn, is intended to provoke widespread governmental dependency and, thus, one-party political control in perpetuity.

Yet, even at its core the idea of racial division, of race itself, is a myth. To sub-divide humanity based upon nothing more than varying levels of skin pigmentation is to rely upon the weakest of genetic markers.

And “race” really does signify nothing more than skin color.

Science dispels the myth of ‘race’

In aFeb. 5 Scientific Americanarticletitled, “Race is a Social Construct, Scientists Argue,” journalist Megan Gannon writes, “Today, the mainstream belief among scientists is that race is a social construct without biological meaning. And yet, you might still open a study on genetics in a major scientific journal and find categories like ‘white’ and ‘black’ being used as biological variables.”

“In an article published today (Feb. 4) in the journal Science,” continues Gannon, “four scholars say racial categories are weak proxies for genetic diversity and need to be phased out.”

“It’s a concept we think is too crude to provide useful information, it’s a concept that has social meaning that interferes in the scientific understanding of human genetic diversity, and it’s a concept that we are not the first to call upon moving away from,” notes Michael Yudell, professor of public health at Drexel University in Philadelphia. Under the latest genetic research, race is “understood to be a poorly defined marker of that diversity and an imprecise proxy for the relationship between ancestry and genetics,” he adds.

While not directly involved with the research, Dr. Svante Pääbo, a biologist and director of the Max Planck Institute for Evolutionary Anthropology in Germany, agrees wholeheartedly with its findings. “What the study of complete genomes from different parts of the world has shown is that even between Africa and Europe, for example, there is not a single absolute genetic difference, meaning no single variant where all Africans have one variant and all Europeans another one, even when recent migration is disregarded.”

“Race” is a divisive means to a selfish political end.

It is not a scientific reality.

We love labels. We love to pit people against one another and lump them into neat, fixed little categories of put-upons, most often based upon outward appearances: black vs. white; Hispanic vs. Asian; tall vs. short; skinny vs. fat; old vs. young; abled vs. disabled, and so on.

Yet these divisions are artificial. They’re man-made. Every human being is created by a holy God, in His image and likeness, and imbued by Him with infinite worth and import. There is only one true and transcendent physical division, and that division was both created and intended by God to become reconciled (as one flesh) through the holy bonds of marriage – this, to propagate the human race: “So God created mankind in his own image, in the image of God he created them; male and female he created them” (Genesis1:27).

Male and female. The XY and the XX. Immutable distinctions with a beautiful and bountiful difference. That’s it. All other physical divisions, especially racial divisions, remain artificial.

Our bodies, you see, are merely outward shells. As the great Scottish author and theologian George MacDonald once wrote, “Never tell a child ‘you have a soul.’ Teach him, you are a soul; you have a body.”

We are souls. We have a body – an outward shell or “earth suit” as one of my favorite professors used to say. Why on God’s earth are we so deceived to believe that we must separate ourselves and hate one another based upon superficial, almost cosmetic outward appearances?

“I appeal to you, brothers, to watch out for those who cause divisions and create obstacles contrary to the doctrine that you have been taught; avoid them” (Romans16:17).

To be sure, Christ Jesus alone can dissolve these divisions. “For there is no distinction between Jew and Greek; for the same Lord is Lord of all, bestowing his riches on all who call on him” (Romans10:12).

These are not financial riches, but riches of love, life Spirit and salvation.

As a man with an Italian wife, a black sister-in-law, a Filipino uncle and biologically related half Filipino cousins, a step-grandmother who illegally immigrated from Mexico, biologically related half Mexican aunts and uncles, and dozens of foster brothers and sisters from across the globe, I have learned firsthand throughout my life that “race” is truly meaningless – it’s less than skin deep.

Until we learn this as a nation, we will remain a nation divided.

There is no political fix to this problem.

And His name is Jesus.