God Has Coffee With Donald Trump

Matt Barber
|
Posted: Mar 06, 2016 12:01 AM
Share   Tweet
The opinions expressed by columnists are their own and do not necessarily represent the views of Townhall.com. 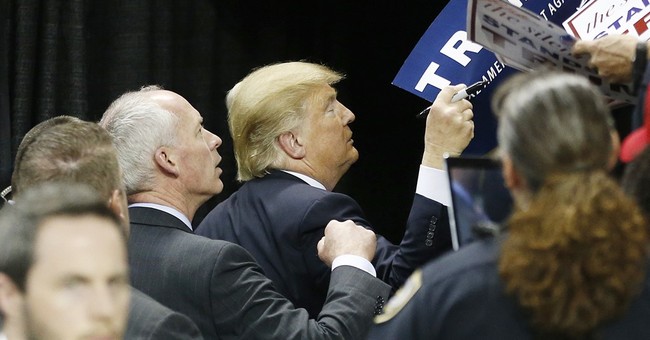 What would happen if Donald Trump sat down with the Creator of the universe in a SoHo bistro?

The following statements attributed to Mr. Trump are not fabricated. The man truly uttered them. Those attributed to God are likewise genuine.

With whom do you agree?

Lattes are poured and chairs, scooted.

Trump: “Nothing wrong with ego. Show me someone without an ego, and I’ll show you a loser. Sorry losers and haters, but my I.Q. is one of the highest – and you all know it!”

Trump: “If you don’t tell people about your success, they probably won’t know about it.”

“Part of the beauty of me is that I am very rich. I’m really rich. Cash is king, and that’s one of the beauties of the casino business. And while I can’t honestly say I need an 80-foot living room, I do get a kick out of having one.”

Trump: “Fighting for the last penny is a very good philosophy to have. I have black guys counting my money. … I hate it. The only guys I want counting my money are short guys that wear yarmulkes all day. Who the f–k knows? I mean, really, who knows how much the Japs will pay for Manhattan property these days?”

God: “Again I tell you, it is easier for a camel to go through the eye of a needle than for someone who is rich to enter the kingdom of God” (Matthew 19:24).

The conversation moves on to Mr. Trump’s boasting of his many adulterous affairs.

God: “Why should you be intoxicated, my son, with a forbidden woman and embrace the bosom of an adulteress?” (Proverbs 5:20)

Trump: “Nice t-ts, no brains. A person who is very flat-chested is very hard to be a 10. Oftentimes when I was sleeping with one of the top women in the world, I would say to myself, thinking about me as a boy from Queens, ‘Can you believe what I am getting?'”

God: “Likewise, husbands, live with your wives in an understanding way, showing honor to the woman as the weaker vessel, since they are heirs with you of the grace of life, so that your prayers may not be hindered” (1 Peter 3:7).

“When a man leaves a woman, especially when it was perceived that he has left for a piece of a– – a good one! – there are 50 percent of the population who will love the woman who was left.”

“If I get my name in the paper, if people pay attention, that’s what matters. You know, it really doesn’t matter what they write as long as you’ve got a young and beautiful piece of a–.”

“It’s all in the hunt, and once you get it, it loses some of its energy. I think competitive, successful men feel that way about women. Don’t you agree? Really, don’t you agree?”

God: “Let marriage be held in honor among all, and let the marriage bed be undefiled, for [I] will judge the sexually immoral and adulterous” (Hebrews 13:4).

The discussion shifts to Mr. Trump’s lifelong and, until of late, Democratic Party affiliation, Obamacare and his opposition to a ban on even partial-birth abortion.

Trump: “No, I am pro-choice in every respect. Very pro-choice. I just believe in choice.”

“[Obama] is a strong guy who really knows what he wants, and this is what we need. What he has done is amazing.”

“I’m a liberal on health care. I like universal health care. As far as single payer, it works in Canada. It works incredibly well in Scotland.”

God: “Each one must give as he has decided in his heart, not reluctantly or under compulsion, for [I] love a cheerful giver. Let the thief no longer steal, but rather let him labor, doing honest work with his own hands, so that he may have something to share with anyone in need. If anyone is not willing to work, let him not eat” (2 Corinthians 9:7; Ephesians 4:28 and 2 Thessalonians 3:10).

The meeting closes with a brief exchange on repentance and forgiveness.

Trump: “For many years I’ve said that if someone screws you, screw them back. When somebody hurts you, just go after them as viciously and as violently as you can.”

God: “But I say to you, Love your enemies and pray for those who persecute you. But if you do not forgive others their trespasses, neither will your Father forgive your trespasses” (Matthew 5:44, Matthew 6:15).

God: “If my people who are called by my name humble themselves, and pray and seek my face and turn from their wicked ways, then I will hear from heaven and will forgive their sin and heal their land” (2 Chronicles 7:14).

God: “Pride goes before destruction, and a haughty spirit before a fall. Righteousness exalts a nation, but sin condemns any people. Good sense is a fountain of life to him who has it, but the instruction of fools is folly” (Proverbs 16:18, 14:34 and 16:22).

And so, God, Mr. Trump and their respective followers part ways, agreeing, for now at least, to disagree.