The Gift of Religious Freedom 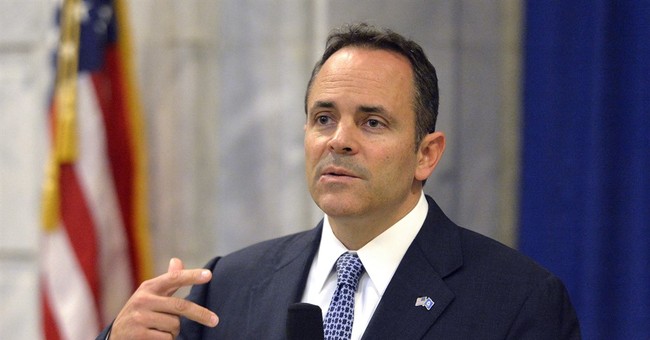 Last Tuesday, Kentucky’s new governor, Matt Bevin, issued an executive order that eliminates the names of all county clerks from marriage licenses and protects the unalienable constitutional rights and religious freedoms of Kim Davis and all other clerks in Kentucky.

“This action is a fulfillment of a campaign promise by Gov. Bevin and is directly what our client Kim Davis has been requesting for months,” said Mat Staver, Davis’ attorney and founder of the Christian civil rights firm Liberty Counsel. “This promise will enable her and other clerks to do their jobs without compromising religious values and beliefs.”

The governor’s statement reads in part:

“To ensure that the sincerely held religious beliefs of all Kentuckians are honored, Executive Order 2015-048 directs the Kentucky Department for Libraries and Archives to issue a revised marriage license form to the offices of all Kentucky County Clerks. The name of the County Clerk is no longer required to appear on the form.”

While the First Amendment alone should be enough to ensure these safeguards, the unconstitutional actions of five “progressive” lawyers on the U.S. Supreme Court, who, back in June, presumed to capriciously redefine the immutable meaning of marriage, has created legal and moral chaos from coast-to-coast, making fixes such as that issued by Gov. Bevin necessary. Furthermore, these extremist lawyers’ subjective and unprecedented opinion will require additional fixes in all other states to reaffirm Christians’ objective and constitutionally guaranteed rights. Although the fight to repair the perversion of marriage committed by the high court will continue, this is an important step in the right direction.

You may recall that Davis was arbitrarily imprisoned for five days earlier this year by federal Judge David Bunning for exercising her religious liberties and refusing to violate her conscience by signing her name to, and, thereby, giving her official approval of, counterfeit “gay marriage” licenses. These licenses, of course, violate both natural law and the manifold biblical proscriptions against the sin of unnatural same-sex deviancy. Bunning’s tyrannical move backfired tremendously, earning Davis’ the support of tens-of-millions of Christians worldwide, as well as both a private audience with, and the express support of, Pope Francis.

“This is a wonderful Christmas gift for Kim Davis,” continued Staver. “This executive order is a clear, simple accommodation on behalf of Kim Davis and all Kentucky clerks. Kim can celebrate Christmas with her family knowing she does not have to choose between her public office and her deeply held religious convictions. What former Gov. Beshear could have done but refused to do, Gov. Bevin did with this executive order. We are pleased that Gov. Bevin kept his campaign promise to accommodate the religious rights of Kim Davis. We will notify the courts of the executive order, and this order proves our point that a reasonable accommodation should have been done to avoid Kim having to spend time in jail.”

“Governor Bevin’s executive action has added to the cloud of uncertainty that hangs over marriage licensing in Kentucky,” claimed ACLU of Kentucky Legal Director William Sharp.

“The requirement that the county clerk’s name appear on marriage licenses is prescribed by Kentucky law and is not subject to unilateral change by the governor,” he demanded, proving that the anti-Christian left’s goal was never about so-called “marriage equality” but, rather, was to force Christians to deny marriage reality and personally affirm, under penalty of law, mock “gay marriages.”

The ACLU will soon have little more to say on the subject as lawmakers are poised to further codify and build upon Bevin’s executive order. “Next month, the Kentucky legislature is expected to update the state’s marriage laws and will consider a provision exempting county clerks from having to issue them,” reports ABC News. “Davis said Kentucky’s marriage laws have been ‘completely eviscerated’ by the Supreme Court’s ruling and said she would be willing to come to the state Capitol to testify about any changes.”

Other state legislatures, as well as the U.S. Congress, must soon follow suit if any progress is to be made into the impasse between secularist change agents hostile to religious freedom, and the faithful Christians who enjoy it as a matter of law.

“In an interview with the Associated Press about her year at the center of one of the biggest social changes in decades, Davis described it as ‘a very emotional and a very real situation to all people.’ But she said simply telling others about her faith was not ‘going to make anybody believe anything.’ And so she put her faith in action by refusing to issue the licenses,” added ABC.

“‘No one would ever have remembered a county clerk that just said … ‘Even though I don’t agree with it, it’s OK. I’ll do it,’ Davis said. ‘If I could be remembered for one thing, it’s that I was not afraid to not compromise myself.’”

Kim Davis will certainly be remembered for her steadfast refusal to compromise herself. But she, along with Gov. Bevin, will also be remembered for helping, this Christmas season, to re-establish the gift of religious freedom for the people of Kentucky.

Even so, the war for our culture will continue into the New Year and well beyond.

Wait...Those Are the Words the Waukesha Christmas Rampage Used to Describe the Coverage of His Crime
Townhall
'Narcissistic sociopath': Alec Baldwin says he feels no guilt over the death of Halyna Hutchins
Twitchy
Jussie Smollett's Request for a Mistrial Will Have You Literally Laughing out Loud
Redstate
40 Years Ago, Monty Python Predicted (and Mocked) Wokeness
PJ Media