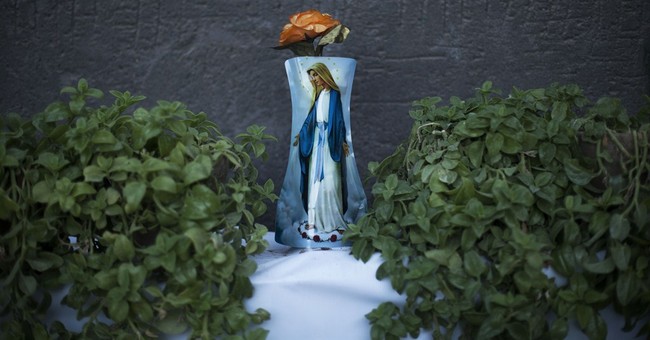 One of the secular left’s latest windmills at which to tilt is America’s fanciful “rape culture.” There is a universal ethos of violence against women, as they imagine it, that stems from a millennia-old global patriarchy chiefly derived from religion in general and Judeo-Christianity in particular (another of their pet nemeses).

Paradoxically, these “progressive” Don Quixotes actually believe in said “rape culture,” something that, outside of Islam, does not exist, while they disbelieve in their Creator, Christ Jesus, who both did and does exist. Exhibit A, of course, is the now-debunked UVA fraternity gang-rape hoax concocted in the disturbed minds of Rolling Stone reporter and radical feminist Sabrina Rubin Erdely, along with some love-struck, not-really-gang-raped coed.

Salon.com’s Valerie Tarico is in the same camp. She is the anti-Christian gift that keeps on giving. She hates Christ. She hates men. And she hates the women who love them.

A year ago I wrote a column featuring Tarico’s claim that Christianity was “going down,” a tired fantasy the pagan left has trotted out annually since the year 0001.

Well, just before Christmas Tarico one-upped herself. The liberal impulse to conjoin the illegitimate twins of Christ hating with man hating evidently proved more than she could bear. In a Dec. 21 Salon screed headlined, “Why rape is so intrinsic to religion,” Tarico gratuitously, and despicably, asserts that God raped Mary.

“Powerful gods and demi-gods impregnating human women – it’s a common theme in the history of religion, and it’s more than a little rapey,” she writes.

“The impregnation process may be a ‘ravishing’ or seduction or some kind of titillating but nonsexual procreative penetration,” she adds.

In order to create the illusion that she is comprehensively “anti-religion,” rather than fundamentally anti-Christian, Tarico then pays lip service to a number of mythological stories involving Zeus, Jupiter, Buddha and others, before finally zeroing in on the true targets of her sniping: Christ, Mary and God the Father.

“Though the earliest Christians had a competing story,” she writes, “in the Gospel of Luke, the Virgin Mary gets pregnant when the spirit of the Lord comes upon her and the power of the Most High overshadows her. …

“Mary assents after being not asked but told by a powerful supernatural being what is going to happen to her, ‘Behold the bond slave of the Lord: be it done to me …’

“Who needs consent, freely given? If he’s a god, she’s got to want it, right? That is how the stories play out.

“Whether or not the delectable young thing puts up a protest, whether or not seduction requires deception, whether or not the woman already has a husband or love, whether or not she is physically forced, the basic assumption is that the union between a god and a woman is overwhelming in an orgasmic way, not a bloody, head-bashed-against-the-ground kind of way. And afterwards? Well, what woman wouldn’t want to be pregnant with the son or daughter of a god?”

After a few disjointed paragraphs suggesting that the biblical account of Christ’s conception really “roots all the way back to evolutionary biology” and men’s need to “maximize their genes,” Tarico blends together nicely her hateful feminist representation of God, the divine rapist, with a more temporal, down to earth bout of good ol’ fashioned man-bashing.

“Powerful men not only want to control the valuable commodity of female fertility, they should. Gods ordain it and model it. And they prescribe punishments for those – especially females – who violate the proper order of things,” she asserts.

And then the train wreck goes completely off the rails.

“Within a society that treats female sexuality as a male possession [snicker], the only consent that can be violated is the consent of a woman’s owner, the man with the rights to her reproductive capacity – typically her father, fiancé, or husband [double snicker]. Many Christians are surprised when told that nowhere in the Bible, either Old Testament or New, does any writer say that a woman’s consent is necessary or even desirable before sex.

“This omission is more than regrettable, it is tragic,” she bellows.

The not-so-thinly-veiled implication here is that Christianity and, by extension, Christians, especially Christian men, not only fails to condemn rape, but that it actually encourages it. To say that this notion strains credulity is generous. In that the Bible is abundantly clear in both the Old and New Testaments that sexual behavior is only permissible and moral within the loving bonds of natural male-female marriage, it is absurd to suggest, as does Tarico, that the Holy Scriptures somehow condone rape. Let alone Christ’s central admonition that we “do unto others” as we would have them do unto us. Such rubbish betrays this woman’s visceral animus toward Christianity.

Tarico then goes on to make up, whole cloth, a bunch more crap.

“But even closer to home for many is the shocking prevalence on college campuses and in society at large of sexual manipulation and coercion perpetrated by males who otherwise seem morally intact. One can’t help but notice that a large number of high profile cases involve high status males: fraternity members, a famous actor, a radio host, small town football stars and big league professional athletes – men, in other words, who think they are gods.”

Um, actually, Val, one can “help but notice” “a large number of high profile” rape cases. Because, though rape certainly does occur and is always insidious when it does, such high profile cases are isolated, rare and, quite frequently, ultimately debunked (e.g., Duke Lacrosse, UVA, et. al.).

Moreover, and as University of Tennessee law professor Glenn Harlan Reynolds recently pointed out in USA Today, “In fact, rape on college campuses is – like rape everywhere else in America – plummeting in frequency.”

Even so, left-wing extremists like Valerie Tarico never let the facts get in the way of a good false narrative.

This very angry, hurting-on-the-inside woman then closes her fictional missive with a man-thumping, God-hating twofer: “Convinced of their own deific qualities, it just follows that the object of their [men's] attentions has gotta want it – and if she doesn’t, well, that’s fine too, because when a god wants a woman, consent isn’t really part of the story.”

Other than truth, the only thing being raped here are the minds of those who consent to read Valerie Tarico’s propagandist twaddle.