How Liberalism Violates All 10 Commandments 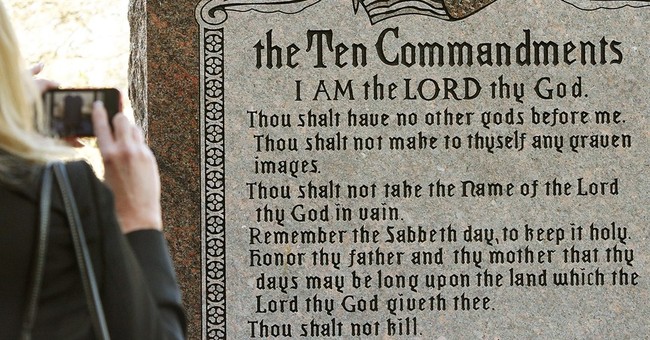 One of my readers, we’ll call him Moses, is the publisher of a mainstream newspaper in California. He wrote me the other day with an insightful observation. Since Moses works in one of the most liberal industries, in one of the most liberal states in the union, I won’t divulge his real name. We don’t want Moses tarred, feathered and banished to Oklahoma with a scarlet “C,” for Christian, emblazoned on his Harris Tweed sport coat. (Note: I have antipathy toward neither Oklahoma – I once lived there – nor Harris Tweed, though I do recommend against wearing Harris Tweed in Oklahoma. Especially in the summer.)

“Matt, think about this,” wrote Moses. “Every one of the Ten Commandments is explicitly violated by a principle of the left.”

So I thought about it.

And you know what? Slap me with a Red River catfish if Moses ain’t exactly right.

To be sure, as individuals, we’ve all violated many, if not most or all, of the 10 Commandments. In our fallen, sinful state we have an inherent propensity to rebel against God’s perfect and holy will for our lives. “For all have sinned, and come short of the glory of God” (Romans 3:23).

Thank God for making available a path, narrow as it is, for eternal redemption and salvation through Christ Jesus.

Still, there is a difference between individual sins and a philosophical worldview that embraces those sins as a matter of course. Modern liberalism – “progressivism,” leftism, secularism, pick your poison – is built upon, by and for sin itself. Liberalism’s entire fabric is constructed by precept planks that are soaked through and stained by man’s arrogant rebellion against our Creator God.

In sum, liberalism is folly. It represents man’s futile attempt to disorder God’s natural order. It’s the unholy brainchild of God’s very first enemy, given by that enemy to God’s favored creation, us, with the sole purpose of destroying that creation.

Volumes could be penned on the myriad ways in which the central tenets of liberalism violate each of the Ten Commandments. The following is a much truncated analysis:

1. Thou Shalt Have No Gods Before Me.

At worst, liberalism denies the very existence of God in the forms of atheism and secularism, while, at best, it adopts that wonderfully “inclusive” blasphemy called religious pluralism. Pluralism presumes to give the false gods of false religions equal footing and denies Christ as He defined Himself: “I am the way and the truth and the life. No one comes to the Father except through me” (John 14:6). Liberal “Christianity” falls under this category. It’s pluralism with a Christian stamp.

Secular humanism, liberalism’s prevailing false religion, denies God altogether and crowns man as king over himself and the measure of all things. “Eat, drink and be merry, for tomorrow we die.”

2. Thou Shalt Not Make Graven Images.

We’re talking idolatry here. Liberalism is built on it. First, there’s literal idolatry (the worship of man-made idols, animals or inanimate objects) enjoyed by our New Age friends. And then there’s everything else: pantheistic environmentalism, the idols of “reproductive freedom,” “sexual liberation and equality,” etc.

Essentially, liberalism worships the created over the Creator. Liberalism also worships the sins of the flesh (see Commandments No. 1, 6 and 7).

3. Thou Shalt Not Take the Lord’s Name in Vain.

4. Remember to Keep Holy the Sabbath.

This one is a bit tricky as it is widely understood to fall under the Jewish ceremonial law, not the moral law – the old covenant, not the new. Christ Himself healed (worked) on the Sabbath. That said, many Christians still view Sunday as the Sabbath and do, indeed, keep it holy. Not all liberals (there are certainly liberal Jews), but liberalism at large denies the Sabbath any significance whatsoever, much less a holy significance.

5. Honor Thy Father and Thy Mother.

Liberalism seeks to supplant parents with “progressive” government. It diminishes parental rights and encourages children to rebel against the antiquated conventions held by mom and dad. It denies that children even need a mother and father and bristles at the “heteronormative” lack of “gender neutrality” inherent within the very words “mother and father.” The sin-centered, counter-biblical notion of “gay marriage” desecrates God’s design for true marriage and family and is intended to undermine these cornerstone institutions.

6. Thou Shalt Not Murder.

Abortion, euthanasia, “pro-choice,” “reproductive rights,” “death with dignity.” Need I say more? Sacrosanct is the liberal rite of passage for a feminist mother to slaughter her own child in the womb. Fifty-five million dead babies later, liberals continue to worship at the pagan altar of “choice” (see Commandments No. 1 and 2).

7. Thou Shalt Not Commit Adultery.

This means all sexual immorality as identified in the scriptures, to include marital infidelity, fornication, homosexuality, bestiality, incest, et al. Liberalism, it seems, embraces all perversions of God’s design for human sexuality. Central to liberalism is moral relativism. When it comes to sex, you can do no wrong because there is no wrong.

8. Thou Shalt Not Steal.

With class warfare as its fuel, liberalism embraces the redistributionist philosophies of Marx and Engels. Liberalism thrives on theft. Like some completely incompetent and inefficient Robin Hood, liberal government steals from the middle class to give to the poor, thereby ensuring that liberal politicians remain in power and everyone else remains miserable.

9. Thou Shalt Not Bear False Witness.

I give you Saul Alinsky from his Rules for Radicals: “The third rule of ethics of means and ends is that in war the end justifies almost any means.” As we’ve learned from Barack “you can keep your insurance” Obama, that includes lying. Liberals lie. That’s what they do. The ends justify the means. Bearing false witness about detractors of liberalism is par for the course.

Again, liberalism uses man’s inherent covetousness as the driving force behind all liberal economic policies. Creating a political climate of economic envy and class warfare gives liberal government the cover needed to take wealth from those who produce and redistribute it to those who don’t. Not only does liberalism violate this commandment, liberalism commands its adherents to do the exact opposite. “Thou shalt covet.”

As Satan “masquerades as an angel of light” (2 Corinthians 11:14), so, too, does liberalism masquerade as good. It’s deceptively packaged in flowery euphemisms and feel-good sound bites that promise “equality,” “tolerance” and libertine notions of “social justice.”

Yet, in reality, liberalism, in both philosophical and practical terms, simply signifies man’s predisposition to “call evil good and good evil.” It’s sin, all dolled up and doled out.

Ronald Reagan once quipped, “I have wondered at times what the Ten Commandments would have looked like if Moses had run them through the U.S. Congress.”

If the Gipper had lived another couple decades, he might’ve found out.