An Absolute Right to Refuse Service 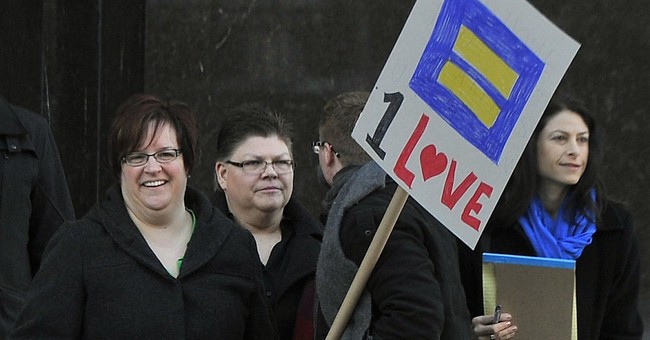 Albert Einstein once said, “Never do anything against conscience even if the state demands it.”

In the aftermath of the Arizona religious freedom skirmish, I have a few questions for those who would presume to compel religious business owners, under penalty of law, to “provide goods and services” to homosexuals in a way that violates that business owner’s conscience.

If you said no to any of the above, and you opposed Arizona’s cowardly vetoed SB1062, then you’re logically inconsistent and need to re-evaluate your position.

To clarify – liberals, I know you have a difficult time understanding the “Constitution” with its outdated “Bill of Rights” and all – I’m not talking about refusing business to someone just because he appears effeminate or she appears butch, or even when that someone is an “out and proud” homosexual.

I’ve never even heard of a case where a Christian baker randomly refused to provide baked goods – such as a birthday cake – to any homosexual, absent a scenario in which those goods endorsed a message the baker finds repugnant (rainbow “pride” cupcakes, “gay wedding” cakes and the like). I’ve never heard of a single instance in which a Christian business owner arbitrarily said to a homosexual: “We don’t serve your kind here.”

And neither can the left provide such an instance. Because it doesn’t happen. If it did happen, it would be front-page news for a month.

No, I’m specifically referring to scenarios that have occurred – and continue to occur – with alarming frequency. Situations in which Christian business owners are being sued, fined or even threatened with jail time for politely declining to apply their God-given time and talent to create goods or services that require they violate deeply held – and constitutionally protected – religious beliefs.

While from a constitutional standpoint it’s not even necessary, that’s all the drafters of SB1062 and similar such bills have endeavored to do. Because government has begun alienating unalienable rights at a level unparalleled since passage of the 1964 Civil Rights Act, legislators have attempted to merely re-affirm the already existing right for religious business owners to live out their faith without fear of persecution or government reprisal.

Seriously, unless you’re fascist, who could disagree? Nobody should ever be forced to spend their time and talent to endorse – whether directly or indirectly – a message or event that he or she finds repugnant. I don’t care if you’re Christian, pagan, black, white, gay or straight. That’s your God-given right as an American.

As a constitutionalist, I’ll remain consistent – will you? If you’re a homosexual photographer, for instance, and, for whatever reason, you oppose natural man-woman marriage, and you choose to exercise your right to only photograph gay weddings, then knock yourself out. If I come knocking and want you to photograph my wedding, and you tell me to pound sand, I’ll suck it up and take my business down the street.

And I won’t even demand you be thrown in jail for it.

See how easy that was? I mean, you’re a liberal. You’re "pro-choice,” right?

Starting to get it?

Well, let me be clear so there’s no misunderstanding. If I’m a business owner and someone comes in requesting goods or services that would require me to violate my conscience – especially my biblically-based, sincerely held religious beliefs – I will not, under any circumstances, provide those goods or services. This is my absolute, non-negotiable, constitutionally guaranteed right.

No debate. No question. No compromise.

Martin Luther King Jr. once said, “An individual who breaks a law that conscience tells him is unjust, and who willingly accepts the penalty of imprisonment in order to arouse the conscience of the community over its injustice, is in reality expressing the highest respect for the law.”

Those are wise words from a wise man. For purposes of today’s debate, however, those words require a slight contextual modification. No “anti-discrimination” law that presumes to remove the constitutional right of business owners to operate their business according to conscience is worth the paper it’s written on.

So, liberals, knock off the Alinskyite obfuscation and conflation. Quit throwing around all this “Jim Crow” crap. It belittles the legitimate civil rights struggle and makes you look stupid. You’ve created an ugly and offensive straw man and beat the stuffing out of him.

I rarely agree with gay activist Andrew Sullivan, but on the subject at hand, he at least has a remedial understanding. Gloss over all the obligatory “homophobe” and “bigot” nonsense, and he recently made a few good points on “The Dish”:

I favor maximal liberty in these cases. The idea that you should respond to a hurtful refusal to bake a wedding cake by suing the bakers is a real stretch to me. … There are plenty of non-homophobic bakers in Arizona. We run the risk of becoming just as intolerant as the anti-gay bigots [read: Christians], if we seek to coerce people into tolerance. If we value our freedom as gay people in living our lives the way we wish, we should defend that same freedom to sincere religious believers and also, yes, to bigots and haters. You do not conquer intolerance with intolerance. … I’m particularly horrified by the attempt to force anyone to do anything they really feel violates their conscience, sense of self, or even just comfort.

And besides, as constitutional law expert Jan LaRue recently observed in an email: “If they believe their own rhetoric, that we’re hateful bigots, why would they even risk eating our cakes?”