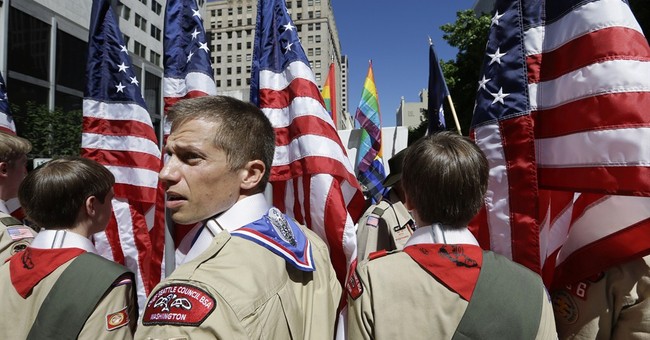 Recently, millions of Americans were shocked and saddened when the Boy Scouts of America (BSA) disgracefully bowed to left-wing political pressure and became something it had never before been: a hyper-politicized, aberrantly sexualized petri dish for social and sexual experimentation.

Created in 1910 to “prepare young people to make ethical and moral choices over their lifetimes,” the BSA, on May 23, 2013, inexplicably voted to welcome into its ranks “open and avowed” homosexuality (boy-on-boy sexual attraction and behavior), thereby disavowing the “morally straight” Scout Oath its members have been sworn to uphold for over a century.

Even worse, and in so doing, the BSA effectively waived the only legal defense it once had to preclude openly homosexual Scout leaders and gender-confused girls from its ranks: religious and moral conviction. It’s only a matter of time until the BSA is forced to capitulate to sexual extremists’ political demands and allow adult males who define their identity based upon carnal appetites for other males to take your boys on overnight camping trips.

This is particularly disquieting when you consider that homosexual assaults against boys occur at an alarmingly disproportionate rate when compared to heterosexual assaults. Of course, not every “gay” man – self-identified or otherwise – is a pedophile, but, and despite baseless claims to the contrary, many studies indicate that a disturbing percentage of same-sex-attracted men are.

Consider, for instance, a study published in the Archives of Sexual Behavior, of over 200 convicted pedophiles and pederasts. It found that “86 percent of offenders against males described themselves as homosexual or bisexual.” This demonstrates, as notes Peter Sprigg of the Family Research Council, that “homosexual or bisexual men are approximately 10 times more likely to molest children than heterosexual men.”

That’s the bad news. Here’s the good news: As the BSA leadership of fools rapidly sinks, those who desire a safe, non-sexualized alternative to the Boy Scouts now have a life raft. On Saturday, June 29, I, along with nearly 50 top Christian, youth and scouting leaders from across the nation, took part in a private, landmark meeting in Louisville, Ky. The meeting was convened to lay the groundwork for a principled, values-based scout-like youth character development program for young men. Although some finishing touches remain (such as the organization’s official name), a press conference was recently held in Washington, D.C., to announce the launch of this exciting new organization. (See video announcement here).

“Our vision is to be the premier national character development organization for young men which produces Godly and responsible husbands, fathers, and citizens,” notes the news release.

“The new program will be an exciting and motivating outdoor-based program focused on leadership and character development for boys and founded on principles and values that reflect a Christian worldview.

“It will be open to all boys irrespective of race, religion, ethnicity, or national origin,” continues the release. “Parents from all faiths are welcome to place their children in the program. While boys may come from every religious background, adult leaders in the program – from the National Board level to individual unit volunteers – will adhere to a standard statement of Christian faith and values.

“The program and themes will teach practical life skills, an appreciation for the outdoors, service to others, leadership, and character development.

“The new organization’s name is currently in development and undergoing an extensive process of legal research and trademark protection. The organizational structure and primary programs are also currently being developed.”

The mission statement reads as follows: “Our mission is simple and clear: to guide generations of courageous young men to honor God, lead with integrity, serve others, and experience outdoor adventure.”

The new organization’s inaugural national convention will be held in Nashville, Tenn., on Friday and Saturday, Sept. 6 and 7, 2013.

At the convention, the name, logo and branding information will be announced, along with other details.

The announcement continues: “In late November of this year the registration process for chartering new units will be announced along with a transition plan for scouting units interested in the new organization. We will be distinctly different from the Boy Scouts although there will be some similarities. For instance, rank advancements earned within the BSA will be transferable.

“In addition, the organization’s membership policy will focus on sexual purity rather than [so-called] sexual orientation. The policy will read, in part: ‘the proper context for sexual relations is only between a man and a woman in the covenant of marriage.’”

This means that boys who struggle with same-sex temptation – a subjective experience that, from a statistical standpoint, frequently dissipates over time – will, of course, be allowed to join. Still, “open and avowed” homosexual identity and socio-political activity, which are both an explicit violation of the Judeo-Christian sexual-ethic, will not be permitted.

I am so very honored to be on the ground floor of this incredible new youth organization. As someone who works daily to counter the cultural damage of the sexual anarchist lobby, I can assure you that homosexual activists’ interest in scouts and scouting was never about the boys, but, rather, was always about selfish adult political ambitions.

Like a swarm of locusts, secular-”progressives” target that which is righteous and God-honoring, fly in, devour it, and fly away in search of the next Truth-based target.

Sadly, the Boy Scouts of America is but their latest victim.

Still, as we are promised in Romans 8:28: “[A]ll things God works for the good of those who love him, who have been called according to his purpose.”

The official sendoff for this exciting new scout-like organization – something very good indeed – will take place on Jan. 1, 2014.

As goes the adage: “Out with the old, in with the new.”