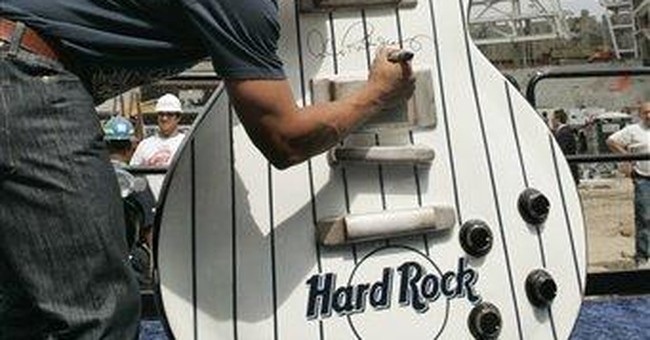 The following article is from the March issue for Townhall Magazine.  To subscribe to twelve issues of Townhall Magazine and receive a free copy of Andrew McCarthy’s Willful Blindness:  A Memoir of a Jihad, click here.

Rock stars are the ultimate individualists, right? Independent spirits with tortured souls and torn jeans, they buck the system, defy the norm, and bear up against the “The Man.” They’re so very anti-establishment.

Except when they’re not. These days, the chances of finding artists who don’t conform to the knee-jerk, hackneyed leftism of a politically predictable entertainment culture seem about as good as seeing a sold-out MC Hammer comeback tour.

Artists are all anti-war unless, of course, you’re looking for class warfare. They re-hash the protest slogans of the ‘60s as readily as they sample the pop hits of the ‘80s. In the search for artists for whom individualism means more than a really ironic thrift-store tee, I found a couple of chart-toppers with minds of their own.

Dolores O’Riordan: Best known as lead singer of “The Cranberries,” the Irish-Catholic crooner and mother of three, whose most famous political statement was the 1994 protest song “Zombie” about IRA bombings in her native country, has also been known as an overtly pro-life artist. Her first solo album was released in 2007, entitled Are You Listening? Maybe you should be.

Quotable: “It’s not good for women to go through the procedure [abortion] and have something living sucked out of their bodies. It belittles women. Even though some women say, ‘Oh, I don’t mind to have one,’ every time a woman has an abortion, it just crushes her self esteem smaller and smaller and smaller.”

Sufjan Stevens: Michigan born and Bible-studying, this quiet indie rock artist has done the unthinkable by inspiring legions of hipster fans, wooing the infamously cynical and enthusiastically eye-linered with subtle lyrics and soft melodies that do not exclude his faith. “Christian rock” he is not, but he is a rock artist who is a Christian, and he’s not shy about it. 2004’s Seven Swans, includes such track names as “Abraham” and “The Transfiguration,” but even that couldn’t stop Rolling Stone from being “taken with [its] poetic splendor” and the Village Voice from writing glowing profiles about the Midwestern multiinstrumentalist. As one writer put it, “between hipsters and God, there is Sufjan Stevens.”

This article is from the March issue for Townhall Magazine.  To subscribe to twelve issues of Townhall Magazine and receive a free copy of Andrew McCarthy’s Willful Blindness:  A Memoir of a Jihad, click here.

Quotable: “I do wonder if people aren’t just interested in music that has meaning...folk songs, hymns, whatever. Patriotic songs with strong melodies. It’s the basis of what I’m doing, just focusing on traditional songwriting.”

Johnny Ramone: As guitarist for The Ramones, the 1980s counter-cultural legend harbored a deep respect for another cultural legend—Ronald Reagan. When his band was inducted into the Rock ‘n’ Roll Hall of Fame in 2002, Johnny capped off his thank yous with this: “God bless President Bush, and God bless America,” and later called the Gipper “the best President of my lifetime.” In 1986, the band released “Bonzo Goes to Bitburg,” a song that criticized Reagan’s 1985 visit to a German cemetery that interred SS officers of World War II. Johnny’s bandmates thought the visit was an insult to victims of the Holocaust,\ but Johnny insisted they change the name to “My Brain is Hanging Upside Down” for the American release of the song, arguing the “Bonzo” title was too insulting to Reagan.

Quotable: “I try to make a dent in people when I can…I figure people drift toward liberalism at a young age, and I always hope that they change when they see how the world really is.”

Singable: “You gotta fight to stay independent / I got my pride and I’m gonna defend it.” (“High-Risk Insurance,” 1980)

3 Doors Down: The Mississippi-bred Top-40 band best known for their 2000 hit “Kryptonite” recently worked with the National Guard to create a 3-minute commercial to be shown before movie screenings. They lent their songwriting talent to the armed forces with the single, “Citizen Soldier.”

Quotable: “Stop and Pray for a soldier today…Never forget that we live in the land of the free because of the brave,” said lead singer Brad Arnold.

Drowning Pool: After several USO performances in Iraq and Afghanistan, the members of this hard-rock band were inspired to come back home, tour to raise money for Iraq and Afghanistan Veterans of America and the USO, and lobby for greater funding and awareness for mental health care among returning soldiers. They’re Obama-supporters in the presidential race, but their aggressive troop-support deserves kudos.

Quote: “You get to know the troops face-to-face, hear their stories, you can’t help but come home changed by that. We want to send a challenge out there to entertainers in all fields to step up, go over and take a piece of home with you to the troops that are over there,” said lead singer Ryan McCombs.

They’re not all conservative, but they’re pro-life, overtly religious,

unabashedly patriotic, and—gasp!—popular, despite living differently in a sea of interchangeable non-conformists. In an industry where allusions to love of God, family and country often come with caveats, these guys are refreshingly—

This article is from the March issue for Townhall Magazine.  To subscribe to twelve issues of Townhall Magazine and receive a free copy of Andrew McCarthy’s Willful Blindness:  A Memoir of a Jihad, click here.

'Grave Sin': Nancy Pelosi Barred from Receiving Communion Over Abortion Stance
Spencer Brown
BREAKING: Title 42 Is Staying at the Border for Now
Julio Rosas
Sen. Ted Cruz Calls Out Google For Sending GOP Emails to Spam
Sarah Arnold
Should We Be Worried That Bill Barr Is Going to Cooperate With the January 6 Commission...Allegedly?
Matt Vespa
A European Country Is Working to Expand Abortion for Teenagers Without Parental Consent