Marvin Olasky
|
Posted: Apr 13, 2016 12:01 AM
Share   Tweet
The opinions expressed by columnists are their own and do not necessarily represent the views of Townhall.com. 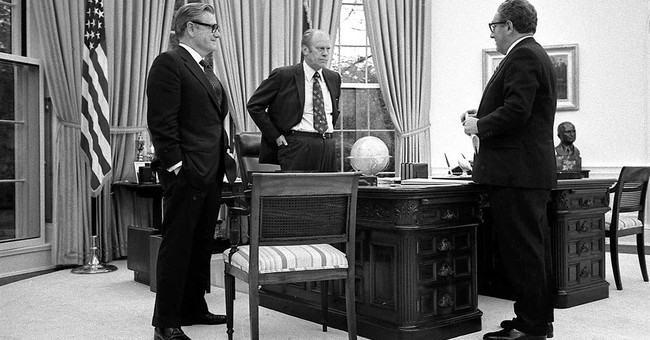 John Adams in 1798 declared: “Our Constitution was made only for a moral and religious people. It is wholly inadequate to the government of any other.”

Do most Americans still constitute such a people? If not, is our Constitution now inadequate? That’s a nightmare, because the constitution we’d put together now would be worse. Novus ordo seclorum, “a new order for the nations,” is on the back of our $1 bills, but nations to be born again require people who are born again.

Much of world history displays strong-arm tactics by erratic leaders. The book of Daniel shows what’s normal. A Babylonian king has a troubling dream and threatens to kill all his intellectuals when they can’t read his mind. He creates a yuge idol -- why? because he can! -- and throws into a fiery furnace the three officials who won’t bow down. Then the king goes really crazy, thinking himself an animal -- but he acted like one even when “normal,” as have so many dictators throughout history.

As my WORLD colleague Mindy Belz reported in just one installment of her valuable online and email report, Globe Trot, Kosovo legislators shoot tear gas at their opponents across the room, Islamists in Yemen attacked a Missionaries of Charity convent and nursing home, and other rogues allegedly murdered an Argentine prosecutor investigating Iranian plots to buy nuclear technology. Normal stuff.

Why? As C.S. Lewis wrote in “Mere Christianity”: “Enemy-occupied territory -- that is what this world is. Christianity is the story of how the rightful king has landed, you might say landed in disguise, and is calling us to take part in a great campaign of sabotage.” In the United States we tend to forget that, because we’ve been blessed with such an exceptional history.

Satan’s going to and fro does not eliminate human responsibility. Many have commented on Donald Trump’s coarseness as if this is a new development, but he’s following the lead of long-running tabloid talk shows like Jerry Springer’s and Maury Povich’s. Both are celebrating their 25th anniversary this year, and they -- like past smashes hosted by Geraldo Rivera, Jenny Jones, Ricki Lake, etc. -- have often featured egotists telling tawdry stories and making sexual references.

To paraphrase Adams, a constitution that works for a moral and religious people is wholly inadequate for governing dysfunctional folks. But we’ve been at the brink before. Many WORLD readers remember the riots and demonstrations of the 1960s and 1970s, and our leaders then were also coarse. Lyndon Johnson barked orders to his aides while sitting on the toilet. Vice President Nelson Rockefeller in 1976 gave hecklers a raised middle finger, and three years later the 70-year-old had a fatal heart attack while having sex with his 25-year-old assistant.

That’s small stuff compared to the damage their policies wrought: arrogant leaders, arrogant action. The Vietnam War tore apart the United States and left the countries we tried to help not only torn but largely destroyed. Nelson Rockefeller, like other liberal New York Republicans, promoted a war on the unborn: He successfully pushed for the legalization of abortion in his state. The Supreme Court’s implementation of that nationwide in 1973 was reason enough for God to stop letting America be exceptional.

Are we under God’s judgment? That’s more than we can know, but we have seen money and power corrupt not because they are evil in themselves but because they allow the illusion of autonomy. The U.S. system of checks and balances has protected us from some of the worst impulses of leaders, but executive orders now override many protections. More and more it becomes obvious that Christ is our only hope.