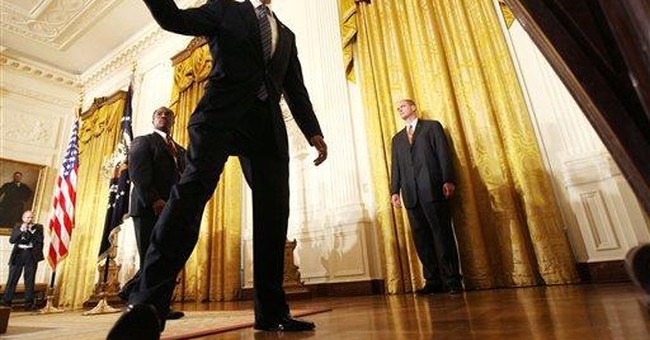 Washington news keeps marching in like a lion, and only the Lamb can stand against it.

Throughout the election campaign I wanted to think the best of Barack Obama. Because of his stand on abortion and other matters I opposed him, but still kept in mind a big positive: Obama as role model, showing some among our most alienated the fruits of education, hard work, and marriage.

I hoped that maybe, just maybe, a President Obama would graduate from campaign mode and apply cool rationality not just to winning votes but to strengthening our economy and America's position around the world. That hope has evaporated.

Obama's role model is Franklin D. Roosevelt, yet Obama evidently is not familiar with Amity Shlaes' fine book, The Forgotten Man (Topical Depression [http://www.worldmag.com/articles/13804], March 8, 2008). Obama says he is embracing "experimentation—if that doesn't work, then you do something else." Shlaes shows that what FDR called "bold, persistent experimentation" deepened and lengthened the 1930s Depression: Businesses faced with ever-changing rules didn't know whether to invest or hunker down.

At least, though, FDR famously said, "The only thing we have to fear is fear itself." He tried to raise the nation's spirits. Obama, though, has repeatedly dampened them with his self-fulfilling prophecies of gloom. Why? Well, look at what the Bush recession did for Obama: It got him elected president, and it has now given him hundreds of billions to spend pretty much as he and his appointees see fit.

If a recession offers such privileges, what about a depression? Imagine an Obama Corps with millions of workers. Imagine, if much of the nation's wealth dissolves, the opportunity to educate children in the virtue of government requiring everyone to "share."

Ah, isn't there political danger here? Won't Democrats pay at the polls in 2010 and 2012 if the economy doesn't improve? Not if Obama and his media soulmates play it right. Already the drumbeat has begun: The problem with the stimulus bill is not pork and the power it gives to Obama to reshape America in his own image. The problem, according to New York Times columnist Paul Krugman, is that the stimulus bill should have been twice as big.

Look at Newsweek's March 2 cover story. Jonathan Alter wrote that Obama "can look successful even as hard times continue. . . . The package is so big, and stretches across so many states, that it provides him at least four years of photo ops. . . . Once these mental pieces are fastened in place and we're fully 'in recovery,' to use therapy lingo, the enduring problems won't seem so terrifying anymore. . . . The longer the recession lasts, the more points Obama will put on the board. . . . Obama will likely package and sell health-care reform, a new energy policy and even national service as 'recovery and reinvestment.'"

Obama has billions of reasons to keep us in a state of crisis. Every time through the end of February that Obama opened his mouth, the stock market went down: Accidental? One equities manager, Peter Kenny, explained an afternoon decline on Feb. 25: "As we came close to the bell we got the curveball: our president came on TV."

Some evangelicals are responding to Obamania by heading to the hills: Y2K hysteria in 1999 was a false alarm but this new administration is a four-alarm fire. Maybe, but if you're tempted that way, read one of the Bible's great history chapters, Hebrews 11, and then its conclusion in chapter 12: "Therefore, since we are surrounded by so great a cloud of witnesses, let us also lay aside every weight, and sin which clings so closely, and let us run with endurance the race that is set before us, looking to Jesus. . . . Consider Him who endured from sinners such hostility against Himself, so that you may not grow weary or fainthearted."

Is our present situation painful? Hebrews 12 continues, "Do not regard lightly the discipline of the Lord, nor be weary when reproved by Him. For the Lord disciplines the one He loves, and chastises every son whom He receives. . . . For the moment all discipline seems painful rather than pleasant, but later it yields the peaceful fruit of righteousness to those who have been trained by it."