Martha Boneta
|
Posted: Sep 24, 2020 12:01 AM
Share   Tweet
The opinions expressed by columnists are their own and do not necessarily represent the views of Townhall.com. 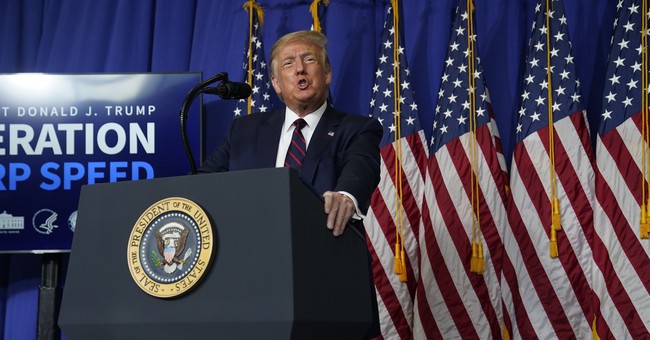 Talk in Washington has turned to the death of Justice Ruth Bader Ginsburg and what President Trump will do to replace her—and Democrats aren’t happy about it.

First, they know Republicans probably have the votes to approve a qualified nominee if the president appoints one. Second, they don’t like that it takes the focus off what they see as a winning campaign issue—President Trump’s response to Covid-19.

But their relentless criticism of his response was about to get called into question anyway as the presidential debates near and the president gets a chance to explain what he did and how.

Because when you look at it, the president’s response has been nothing short of spectacular.

Official death tolls now put the damage at nearly 200,000 Americans. Considering more than 2 million were predicted at the outset to die in the first year, we’re still at less than 10 percent of the prediction. About half the victims were 85-older; about two-thirds are 75-older.

New York, where the Democrat governor ignored the Navy hospital ship in New York Harbor and the other hospitals the federal government built for the state and forced Covid patients into nursing homes, accounts for about a sixth of the deaths in the nation and more than Texas and California combined.

And this for a virus no one outside Wuhan, China, had heard of until New Year’s Eve.

Early on, we read that President Trump basically ignored the virus for 70 days, by which time it had sunk its tentacles into the American mainstream and shut down our economy. The problem with this scenario is that no one can show which 70 days Trump abandoned ship.

Three days after China reported the discovery of the virus to the World Health Organization, Trump had directed the Centers for Disease Control and Prevention to try to get scientists into China to investigate.

By Jan. 6, the administration had issued its first travel warning to Wuhan. By the 11th—the day the administration got its first look at the mapped genome of the virus—it had upgraded the travel notice to Level 1 and begun to search for a vaccine. By Jan. 23, the first coronavirus test had been approved conditionally by the Food and Drug Administration.

By the end of January, the White House Coronavirus Task Force had been appointed, vetted, agendized and announced, and the White House had cut travel to China and declared the coronavirus a public health emergency.

On Feb. 4, President Trump talked about Covid during his State of the Union address, saying the U.S. would do everything in its power to stop the disease and save Americans. House Speaker Nancy Pelosi famously tore up that speech, and 20 days later, when Covid caution had begun to threaten the bottom line of merchants in San Francisco, she went on TV to say “Come to Chinatown. Here we are. Come join us.”

By the end of February, the administration had gotten experts into China, announced a series of partnerships to develop vaccines, allowed more labs to produce tests, and barred travel to Iran and restricted it to other countries.

He approved tele-health visits, let doctors practice across state lines, and got American businesses to ramp up ventilator manufacturing to the point we were producing in 100 days three times what we produce annually.

On the economic side, he waived interest on student loan payments, moved tax day from April to July, created a program to issue low-interest and no-interest loans to small businesses, deferred other tax payments, and rewrote USDA regulations to help feed children who lost their access to meals when schools shut down in the middle of the month.

In the Coronavirus relief packages, he ensured direct payments went to Americans as well as tax breaks, a moratorium on foreclosures and evictions, and other measures to help them endure the hardest parts of the lockdown.

And what is the result? The curve is flattened. Vaccines are expected within the month. Deaths are down to less than 300 per day in a country of 340 million people, and no one in the U.S. died for lack of a ventilator, meds, beds, or protective equipment. Unemployment, which reached a record 14.7 percent at the height of the shutdown in April, is now 8.4 percent nationally and as low as 6 percent in states where governors have been aggressive about reopening.

And all done by working with private industry in the greatest public-private mobilization since World War II, by working with governors across party lines, and by remaking health care and approval processes on the fly to better respond.

America will be stronger as a result of this. Our health system will be better prepared for the next pandemic—and the next flu season. Our economy will be more resilient. And a lot of the thanks for that must go to President Trump. So yes, let’s talk about his Coronavirus response. Let’s tell the whole story.