After the Trump/Kim Summit, Guarded Optimism

Mark Davis
|
Posted: Jun 13, 2018 6:40 AM
Share   Tweet
The opinions expressed by columnists are their own and do not necessarily represent the views of Townhall.com. 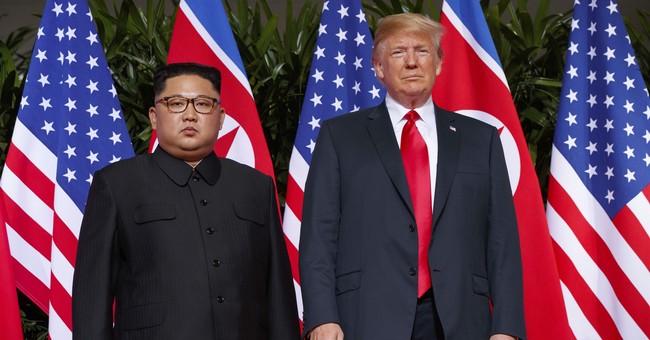 So, is the Korean peninsula completely denuclearized yet? I mean, it has been a couple of days.

This appears to be the bar for many who are desperate to disparage an amazing moment on the world stage, made possible by the improbable, blustery force of nature that is Donald Trump. Remember his tough talk and playground name-calling that had all the smart kids bracing for nuclear war? Turns out that was a language that resonated in the man-child brain of Kim Jong-un, who shared the spotlight with Trump in a summit that could be the first steps toward the most significant American foreign policy victory since the days when we actually won wars.

Of course, it could also be a mirage.

It is, after all, North Korea, a country as famous for lying as for starving its people and torturing its political prisoners, including the occasional American. This could be the same play with a different cast of characters.

But somehow this feels different. The American President is surely different than the leaders of both parties we have elevated in the last 25 years, none of whom caused a loss of sleep in Pyongyang. The Trump difference is stark on many levels: he communicates brashly, he praises fulsomely, and most important, he leaves North Korea wondering if he might bomb them. The value of this cannot be overstated.

But the key to the success of any new relationship may lie with the North Korean leader, who is also a figure of unprecedented properties. Unlike his old-school crusty Communist father and grandfather, Kim Jong-un was born in the eighties, raised on a diet of NBA basketball and bootlegged American movies. It can be safely presumed that while he has never been motivated to relieve the discomforts of his people, he may respond to the temptation to make history.

The history he has made so far involves sailing missiles over the heads of his neighbors, some with the perceived range to reach the Pacific coast of the United States. That earned him a threat from the President of a type never heard before.

Trump’s “fire and fury” bombast widened eyes around the world. In Asia, various leaders wondered if America was indeed pondering a military response. One of those leaders was obviously Kim Jong-un. In America, the people already prone to despise Trump had all the evidence they needed to deliver an amateur diagnosis of mental instability.

For them, this is a very bad week.

Trump’s haters in both parties are crouched in a constant vigil for something that will justify their revulsion. Instead, they have seen an economy revitalized, a bolder pushback against America’s strategic enemies and trade rivals, and a Trump base energized by all of it. The result is the flattening of the supposed “blue wave” that was supposed to dislodge Republican congressional majorities and impede the Trump agenda.

But, far from chastened, the President’s detractors sneeze at the economic rebound, wring their hands at his exits from the Iran nuclear deal and the Paris climate accords and hurl invective at him from awards show stages. As such, there was no expectation that these critics, from Hollywood to the dominant media culture to the caves of NeverTrump, would suddenly applaud the summit with the North Korean leader.

They faulted the broad joint statement as lacking in specifics, as if the Singapore meeting was designed to sprout a date certain for a nuclear-free peninsula. They warned that Trump had been outshone by Kim, and that he had delivered “legitimacy” to the dictator. This was a curious sensitivity to see from people who had welcomed Barack Obama’s surrenders to terrorist Iran and communist Cuba.

There was no surrender in Singapore, no trunkloads of cash offered for hostages, no relaxing of sanctions for no reason. Kim enjoyed the equal display of his flag with ours, a stage shared with the world’s most powerful leader, and even a glimpse inside our totally awesome presidential limo.

But back in his Pyongyang palace, the North Korean leader knows that while his nation’s future may contain dazzling images like beach hotels and reliable electricity, it may also contain the roar of American bombers overhead if this all goes south.

Kim’s predecessors never worried about that from any of Trump’s predecessors. That’s why this moment is different. Wrapped in the cordial, even jovial mood of a successful summit, the world knows that this is not the same old dance between our two countries. It is enormously premature to conclude that peace and stability are at hand on the short horizon, but no one is actually asserting that. Conversely, it is absurd to give this moment in history a skeptical slap. That is happening broadly, fueled largely by disdain for the president who made it happen.

We have already heard voices yearning for an economic downturn so that Trump’s political fates can suffer. It is not hard to detect that some would prefer additional years of a nuclear North Korea to a second term of Donald Trump.

In a time when every opinion seems to funnel through support or disdain for Trump, the objective truth would seem to be that the summit was a significant opening chapter of a story yet to be written. There is cause for optimism and room for doubt. The story will be written by the behaviors of the leaders of our two nations. Progress is hard to predict because we don’t know what Kim will do, but it may well be likely because Kim does not know what Trump will do.