Mark Davis
|
Posted: Feb 19, 2018 12:01 AM
Share   Tweet
The opinions expressed by columnists are their own and do not necessarily represent the views of Townhall.com. 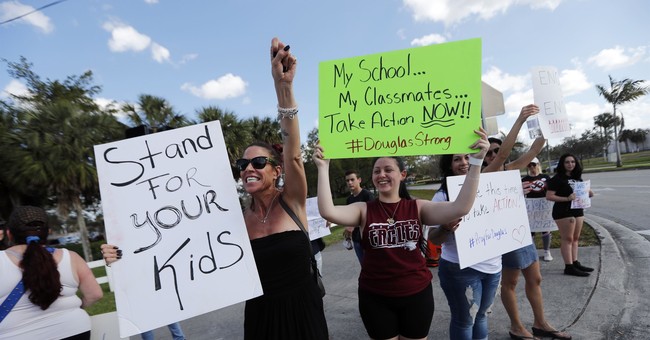 Like all of its modern predecessors, the Florida school shooting has sparked the usual outcries from people who actually assert that these are not people problems but gun problems.

They do not seek to address our fallen world or our broken society or the human capacity for evil or inadequate school security or insufficient attention to warning signs.  Those are hard solutions requiring the heavy lifting of introspection.  They would rather obsess about the hardware.

Sometimes their rhetoric mixes in vicious slander with its fundamental illogic.  Consider this attack on conservatives who dare to suggest that gun violence is not best solved by lawmakers:  “We are going to force them to spend more energy protecting human lives than unborn fetuses.”

One might begin with the reminder that unborn fetuses are indeed human lives, adding that it is the height of obnoxiousness to suggest that gun control advocacy is the sole evidence of a wish to protect human lives.

Here’s the complicating factor: that pearl of invective came from a 17-year-old, and not just any 17-year-old.Those are the words of Cameron Kasky, who survived the Parkland, Florida school shooting, emerging along with many of his classmates with some sharp-tongued rebukes for grownups who might not share their politics.

So what should happen here?  As memorial vigils morph into full-throated gun-grabbing rallies, are conservatives supposed to remain silent as public opinion is swayed by the most sympathetic voices imaginable?

We cannot.  But here’s what else we cannot do: We cannot engage as if we were in some adult forum slinging opinions with our peers.  That would not go well as we seek to be assessed not simply as sensible citizens but decent people.  None of us should seek to go toe-to-toe in the arena of debate with kids who could have died in a hail of gunfire days earlier.

But nor can we flee to the sidelines and let bad ideas rule the day.  In any argument, the points made by all sides should be weighed using logic and reason.Victim status and personal experience may, but do not necessarily, contribute to either of those.

From students who survived that massacre to parents whose children did not,  that community has earned a special spotlight and any opportunity to weigh in with feelings fueled by their experience.  For some of those voices to seek the knee-jerk path of gun control is understandable.  But just as conservatives risk bad optics with any harsh reply to a Parkland call for useless new legislation, the chorus from that community has unfortunately contained offenses against logic, and genuine offenses against decent people.

I should have only one thing to say about Cameron Kasky—that I thank God he is alive, and that I join in prayers lifted up for his family, his school and his community.

But if young Cameron is going to engage in the political bigotry of the left, the goodwill of the occasion takes on an uncomfortable taint.  With a daily radio show and a steady stream of columns to write, I have wrestled with how to draw the line between the deference properly shown to Cameron and his classmates and the wholly wrong solutions many of them seek.

My recommendation:  address the points, love the person.  This is actually good advice for almost any debate at any time.  When Parkland student Emma Gonzales takes to the mike at a rally to “call BS” on leaders who oppose the reflex passage of tougher gun laws, no one should instruct the young lady to sit down and wait for the wisdom of age, or minimize her passions by saying they are born of the trauma of the event.

Instead, without reference to their source, let us respond to such calls with our own solutions, offered because we truly do want to reduce the number of school shootings and lessen their lethality when they occur.

There are many Parkland students and parents who will not believe us. Sadly, many have channeled their pain into the hateful rhetoric that opposing gun control is “doing nothing,” or worse, that Americans who value our constitutional rights, from their Florida neighbors to the NRA, have a lower regard for human life.

We cannot, and should not, shout this down.  Not into the faces of people who are burying their sons, daughters, sisters, brothers and friends.  This is not a barroom debate or a bull session with a liberal co-worker in the next cubicle.  These people with broken hearts are speaking from those hearts, and we should give them some room.

In no way does this mean we lie down and let those passions lead to abrogation of our liberties.  As they always do, public outcries will blaze a trail to state capitols and the halls of Congress, and that is where we engage along every step.

The Marjory Stoneman Douglas High School shooting was a breakdown of multiple safeguards we already have.  I do not know how the FBI recovers reputationally from the dropped ball that cost these precious lives.  I also do not know if we as a society can muster the clarity and courage to identify our broken people, take action to dissuade them from murder and protect our schools with better security.

But we must resist any momentum that gathers toward the fruitless and often unconstitutional goals of the gun-grabbers, no matter the empathy we might have for the movement’s heroes of this moment.

Demonizing AR-15s will achieve nothing. Getting serious about spotting and responding to disturbed kids will.Slandering the NRA and its members is an act of hate speech.  Addressing our ill-secured, vulnerable schools is the ultimate act of love and concern.

Offering that South Florida community every prayer and every good wish does not mean we ignore bad solutions that emerge from the cauldron of that tragedy.  But it does mean observing a time and a place to engage.  Daily life is not our own personal string of cable news segments inviting sharp response.

When we stand our ground, let’s make clear that this is not a zero-sum game.  Our victories are not losses for those who disagree.  Secure schools, a vigilant society and a repaired culture are the results that truly will reduce mass shootings.

From President Trump to all of our fellow Americans, and particularly our fellow conservatives,  it is a time to reach out with love and fight for our values with passion.  Those can and should be done at the same time.