After the Gunfire, the Fusillades of Hypocrisy

Mark Davis
|
Posted: Jun 15, 2017 8:34 AM
Share   Tweet
The opinions expressed by columnists are their own and do not necessarily represent the views of Townhall.com. 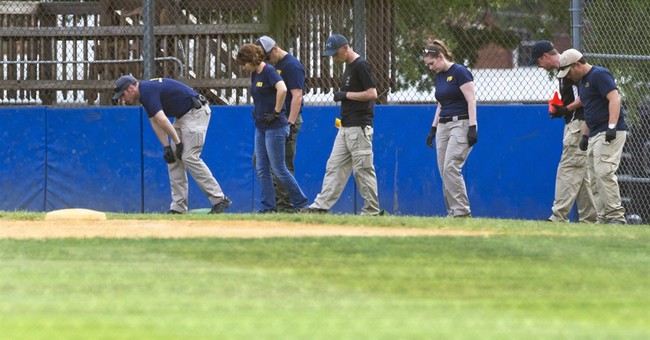 Paul Ryan had it exactly right. The politically-motivated Wednesday morning shooting at the Republican baseball practice in Alexandria gives us many mental pictures we’d like to erase, but also many images that have the power to inspire: the bravery of the first responders, the moment of shared humanity that led to a temporary shelving of partisan bile, and the determination to proceed with the Congressional Baseball game.

Thousands will gather tonight at Nationals park for a game that will attract far more than its usual share of attention. Tonight, the game will be more than an evening of camaraderie; it will be a statement, by players and attendees alike that we will not be cowed into submission by the evil acts of a twisted hatemonger.

Then, it’s back to normal. And normal is not so uplifting.

Normal means Republicans and Democrats will get back to pitched battles over the direction of the nation. Democrats will fight doggedly (and dirtily) to prevent the conservative change that a Trump administration brings. Republicans will fight, if unevenly, to bring about that change, hindered by malcontents in their own ranks-- some faint-hearted warriors who were never as conservative as their campaigns suggested, and others poisoned by the neuroses of NeverTrump self-absorption.

Nonetheless, alongside the absurdities of Russia hysteria, the usual rhythms of ideological back-and-forth will resume soon. And they should. We have a country’s course to plot, and heaven knows Trump’s enemies will not be taking a time out.

So, let’s embrace the burst of goodwill this moment has yielded, but stay sharp as it fades. Two factions will try to weave from it a strategy designed to weaken conservative resolve.

First will be the voices from the left who will accuse us of “politicizing” the shooting because we have scolded those who instantly turned it into a soapbox opportunity for gun control. If there were honesty all around, we would become comfortable with the fact that political battles require political strategies. So yes, conservatives will armor up to prevent gun-grabbers from using Alexandria (or Wednesday’s other shootings) as an excuse to disarm the law-abiding.

The only thing that prevented two dozen deaths at the hands of a madman with a gun was heroes with guns. This time the heroes were from the ranks of law enforcement; they are often from the ranks of private citizenry.

From gun control to borders to Supreme Court justices to national security to taxes to the environment, the Trump agenda requires all hands on deck for success. There is no time for posers and pretenders to deter the progress that voters demanded in November. The left will call on all sides to dial back the partisan tones and hit a pause button on “divisiveness.” This is intended to lull us into a collapse on core values. That cannot happen. While calling for cooler heads, the left will be spinning up its own nuclear-strength turbines of big government and radical culture, which they expected to be able to deploy with ease during the Hillary Clinton presidency they were denied.

The second wave of post-Alexandria hypocrisy will come from inside the ranks of Republicanism, or at least from people who still fancy themselves Republicans, even though their positions reveal their tolerance, even affinity, for the prospect of a Hillary presidency.

Whether due to insufficient conservatism or the mania of NeverTrump fixations, some people who have spent years giving lip service to the policies Trump is actually promising have been whipped into a lather of opposition that leads them to mock those of us who actually want this Republican president to succeed.

In the hours following the shooting, Twitter was brimming with lovely calls for calmer demeanors and kinder interactions. Problem is, many of those calls came from people who used to have careers as credible Republican strategists, consultants or columnists, who have spent the last seven months heaping as much hate on Trump and his supporters as any rabid liberal.

It is a given that some conservatives will try to pin the shooting on the overall atmosphere of hate practiced and embraced by the left since the Trump win. This is not without foundation; one wonders if their various unhinged acts and words are fed by an overall political and cultural collapse of basic decency, amounting to Trump Derangement Syndrome.

But on a case-by-case basis, no individual act of evil is the direct fault of a broad atmosphere of political bigotry. Individuals are responsible for their own actions, and should be assessed as such.

Moving forward, though, let us hope for two changes: on the left, the emergence of some shred of conscience that restrains hateful excesses from its office-holders, commentators, and comedians; and on the right, a vigorous focus to keep all eyes on why Trump won: a desire for sweeping changes so profound that even some Republicans are freaked out.

That’s how we know the change is real. There are two kinds of people—those who can handle it and those who can’t. Some of those who can’t are driven to rhetorical excess in congressional committee hearings; others snap and resort to violence.

After the handshakes of the Congressional Baseball game, with its expected moments of emotional impact, the Republican team should know that the Democrat team will get back to its sworn task of not just opposing, but destroying the Trump presidency.

They had better be ready.