Kaepernick Anthem Snub is Not a Free Speech Issue

Mark Davis
|
Posted: Aug 29, 2016 12:01 AM
Share   Tweet
The opinions expressed by columnists are their own and do not necessarily represent the views of Townhall.com. 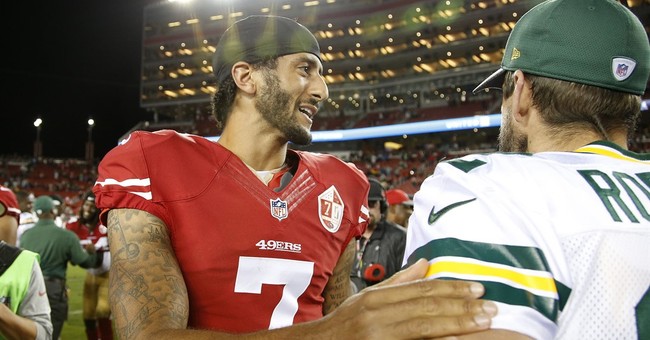 It is hard to know which is more disillusioning: an NFL quarterback stupid enough to insult an entire nation in a political hissy fit, or a multitude of constitutionally illiterate people who think it is a free speech issue.

For a while there, San Francisco 49ers quarterback Colin Kaepernick was a story featuring something for everyone to admire. His childhood was a product of admirable values from the beginning, from a birth mother who chose adoption over abortion to a white couple raising a mixed-race child in one of those environments that inspiringly proves that racial differences do not matter. A straight-A student in high school, he thrilled fans at the University of Nevada with a dazzling combination of passing and running talents.

In just five NFL years, he has led the 49ers to two NFC championship games and a Super Bowl. He is recognized for multiple tattoos, but many refer to faith and contain actual Bible verses. So much to admire.

And now this: a spectacle stemming from his refusal to stand for the national anthem because to do so would “show pride in a flag for a country that oppresses black people and people of color.”

I don’t presume to know how Mom and Dad feel as their son aligns with the America-hating bile of Black Lives Matter, but a weekend social media firestorm has revealed reactions from many corners.

Most have it exactly right, that this is an infuriating story of another slap at our nation based on anger over racial disparities. Kaepernick’s derision of America is not even limited to the police controversies of late. It is a wide indictment typical of today’s worst race-baiters— that America remains a racist cauldron despite the wave of enlightenment that began more than twenty years before Kaepernick was born.

Less than a decade after the Civil Rights Act of 1964, racism was on its way to the dankest corners of human behavior. “All in the Family” won massive affection for lampooning bigotry; from legislation to the culture, racism was being chased into obscurity. By the time baby Colin was raised in a loving home, being a racist was already the worst attitude anyone could display in America, a stigma even more sharply honed today.

Can racism still be found? Of course. It is part of the seamy underbelly of human nature that will always fester in the occasional basement, along with religious bigotry and misogyny.

But anyone asserting today that our entire nation deserves an attitudinal scolding on race is guilty of a stunning level of ignorance. Kaepernick’s explanation his tantrum is filled with the first-person obsessions of the narcissist: “I know that I stood up for what is right… It would be selfish on my part to look the other way.”

What a complete shovelful.

So his black teammates who actually stood for the anthem, and players on other teams, many of color, who have distanced from his petulance, what are they? Just not as sensitive and socially aware as the wise and bold Colin Kaepernick?

It is his incendiary gesture that smacks of selfishness, a self-absorption that says “because I am upset I am going to offend the sensibilities of millions of Americans.”

I’m sure this 28-year-old views himself as the heroic heir to Tommie Smith and John Carlos, who raised their fists in black power salutes on the medal stand in the 1968 Olympics in Mexico City. Controversy exploded then, too, but they could point to a nation where Dr. Martin Luther King Jr. had been killed six months earlier and widespread acceptance of racial equality was still a work in progress.

Colin Kaepernick has chosen to engage in an act of hate against the America of 2016, a nation purged of every law that tilted against minorities, a nation that elected a black president when he was a sophomore in college.

One presumes Kaepernick has read a newspaper since. Of course, we would like to presume that all of the idiotic claims of America’s still-racist soul would be instantly dismissed as folly. Not as long as there are political points to be scored by casting doubt on the miraculous progress we have made in eradicating prejudice.

The twittersphere ballooned with condemnation of Kaepernick, but also contained voices thrilled to have their own disdain for America reflected in as public a space as an NFL sideline.

So is this just one of those things where we all agree to disagree? It is not.

The 49ers and the NFL have issued the lamest of responses, the team saying it “recognizes the right of an individual to choose to participate, or not, in the celebration of our national anthem,” the league saying it “encourages but does not require players to stand during the playing of the national anthem.”

This needs to change immediately. A team or a league unappreciative of the shared expectation of the most basic gesture of national appreciation does not deserve a dime of public money or a moment of TV viewing time.

I’m not an idiot. I will be glued to games all season, in my case praying my Dallas Cowboys can survive our own quarterback crisis. But at least ours involves injury, which is unavoidable in any sport.

Intentional public snubs of our cherished national traditions are completely avoidable, and if the NFL won’t do it, every NFL coach should. I’ll even write the memo:

“On our team you are welcome to feel any way you wish about America. During the anthem, you may sing, chew gum or stare at the cheerleaders. But if your butt hits the bench, you can keep it there, because you will not be playing for us. On that sideline, you are our representative, and our team has expectations of this basic level of appreciation for the nation that allows all of us the freedom to live out our NFL dream. We will interpret your failure to recognize that as a wish to discontinue your service with this team.”

There, was that so hard?

This really is quite simple, but the whole mess is compounded by the silly belief that this is somehow a free speech issue.

Constitutional geniuses sprang up all over social media: “We may not agree, but he has the right to do this.” “We don’t give up our first amendment rights when we show up for work.”

Actually, the average teenager knows that yes, you do, at least as far as the right to say and do things and get away with it.

Free speech means we will not be arrested, fined or otherwise sanctioned by government for expressing ourselves on our own time in places that are solely our business. How dumb do you really have to be to think this extends to saying or doing anything you wish at work?

Imagine the car salesman taking time out to lecture customers in the showroom about abortion rights. Let’s have cooks emerge from the back of fast food restaurants to distribute leaflets decrying gun violence. (For the record, I recognize that employees are similarly restrained from free speech that I actually agree with.)

Our expressive urges properly conform to the conditions of our employment. Colin Kaepernick is not at a town hall meeting or a talk show appearance when he is on the sideline wearing a 49ers uniform. He is part of an organization that has the right to behavioral expectations and a list of sanctions if they are flouted.

Sadly, in this case, it appears neither the team nor the league has much interest in exacting even a middling level of public courtesy from players. But that does not mean players, or any of us, have some right to words or gestures that run afoul of our employers’ wishes without consequences.

As tweeters fuss back and forth over whether Kaepernick is a hero or a scoundrel, the occasional lament can be found: What’s the big deal?

It is this: when intentional and baseless affronts to our nation become something that is tolerated by growing numbers of organizations and institutions, it means we have lost the most basic expectations of civility and decorous behavior.

We are all free to love or hate our nation as we wish. But when in public, those paid handsomely by ticket-buying spectators need to holster their peevish political urges for the sixty seconds of expected respect for the nation that affords them that freedom.