A Time for Choosing

Mark Davis
|
Posted: Jun 17, 2016 12:01 AM
Share   Tweet
The opinions expressed by columnists are their own and do not necessarily represent the views of Townhall.com. 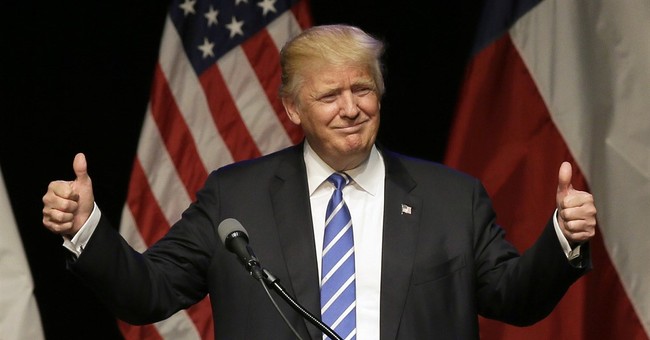 On Thursday night, I stood on the stage at Gilley’s Southside Ballroom in Dallas, pleased to address a crowd gathered for a Donald Trump rally.

Just over three months ago, I stood on the same stage, pleased to address a crowd gathered for a Ted Cruz rally.

Such has been the journey.

The nominating conventions are next month.  Only an indictment can derail Hillary Clinton, and only a coup of epic proportion can thwart Trump.  Either one is possible, one supposes, but the likeliest path by far leads to those two squaring off to become the 45th President of the United States.

It is a time for choosing.

No more fence-sitting.  No more #NeverTrumpOrHillary, no more conservative hand-wringing over their latest self-imposed obstacles to backing our nominee.  The battle is over, Trump has won.  There are now two kinds of conservatives:  those who can handle that, and those who cannot.

For those who cannot,  serious introspection is in order.  Failure to back the Republican nominee will lead to a Hillary Clinton presidency, which should be unacceptable to any conservative.

No more convoluted pseudo-analysis over how a Trump presidency somehow damages conservatism or damages the party.  This is about the country.

The country must not be savaged by a third Obama term.  Whatever baggage clouds the mind of hemming and hawing conservatives, it is time to get over it.

Got concerns over portions of the Trump agenda that might not be conservative?  I do, too. Let’s be vocal in our wish for a crack inner circle of sharp minds to guide President Trump toward his best results.

Nervous about some behavioral diarrhea that might fall short of presidential decorum?  Me, too.  So let’s encourage his stretches of days that are solid and free of such drama.

But what we must not do is remain silent as Republican opinion leaders subjugate the nation’s fate to their own interests.

House Speaker Paul Ryan, asked if he would rescind his Trump endorsement, said this week that was “not his plan.”  Wow, thanks, Paul.

Republican governors in two blue states have punted much of the enthusiasm we might have otherwise felt at their ascendancy.  Larry Hogan of Maryland and Charlie Baker of Massachusetts have both said they will not vote for Trump.  Baker revealed his genius Election Day plan: “I guess when I get behind the curtain I’ll have to figure it out.  Maybe I’ll write someone in.  I’m not sure.”

Governor, you have a little less than five months to pull your head out.

Hogan shared some sharp analysis:  “I don’t think either party has put up its best candidate.”  We no longer have time for such a glaring irrelevancy.

I do not say this lightly.  These two Governors, and the Speaker of the House, are motivated by something other than America’s urgent interests.  Oh, they may think their personal gripes rise to the level of sincere concern for the nation, but they simply do not.

For Ryan, it may be the legions of upper-crust Republicans petrified by the notion of a body blow to the usual pecking orders of party power and privilege.  For the blue-state Governors, it may be the fear of voters snapping back to their usual liberal voting habits.

Whatever.  It is a time for choosing.

Conservatives must choose whether to stop a Hillary presidency or to be a willing accessory to it.  From the Supreme Court to job creation to fighting jihad to defending the Second Amendment, there is no logic in the universe that suggests she is the better choice.

Any conservative willing to help her win has a prioritization problem.  I am not unsympathetic; many of the concerns they voice are the same ones that led me to prefer Ted Cruz.

But guess what, kids?  Cruz isn’t running any more.  Neither is anybody else.  None of the silly third-party fantasies are going to happen.  It’s time to put on some big-kid drawers and get our heads right.

This back-and-forth was actually fairly invigorating in the primary season.  The interplay between Trump people, Cruz people, Rubio people and the fan bases of the dozen-plus other candidates was a proud display of our wide and talented field.

But it’s not March any more.  The primaries are over.  The race for the nomination is won.  Now there is one more race to win, and it is under way at full steam.

Any Republicans with bugs up their butts about Trump need to exercise some self-control.  It’s a free country; they have the right to harbor and express whatever likes and dislikes they wish.  But they should know that if they mouth off about their latest self-indulgent beef regarding Trump, they are not doing any favors for any of their voters who might actually want him to beat Hillary.

There is no conservative principle more pressing than this:  Hillary Clinton must be stopped.