Religious Accommodations Simply Do No Work In Government Jobs 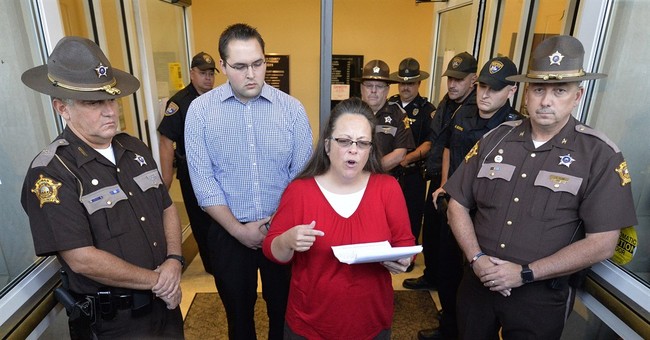 Before we begin this jarring exercise, I’d best wrap myself in the following layers of fire protection:

1. I completely agree with Kim Davis (and every other social conservative) about the scriptural definition of marriage.

3. It is time to fight back to reassert the rule of law in an era when judges issue rulings based by their political whims.

4. Every Governor in a state where voters did not approve gay marriage should have ordered county clerks to refuse to issue same-sex marriage licenses.

Everybody good? Now let’s plow into the rough waters.

This is not a column about Kim Davis. For the record, I found value in her civil disobedience, which shed light on what happens when people of a state are forced against their tenth-amendment rights to accept tectonic societal change against their will.

But no county clerk is ever going to win the battle until the rule of law is re-established above that pay grade, ultimately by future Presidents who will protect us from justices who foul our founding documents.

So let’s spend some time on the tap-dance under way by people who know full well county clerks cannot change laws, even terrible ones, but seek to show them support with the flawed concept of a religious accommodation.

Public employees, they say, should not have to check their personal faith at the door in order to serve the public. This gets cheers if you are Mike Huckabee outside the Carter County detention center, but there’s a problem: in a broad sense, subjugation of personal beliefs is central to every public employee job since the birth of the nation.

The definition of a government job is: it ain’t about you so much when you walk through the door. In our eagerness to show support for a woman whose faith we admire, we have obliterated the obvious line between a private sector job like wedding photographer and cake-baker, where business owners make the rules, and government servants, who are there, to, well, serve.

That service means the tee-totaling government employee has to issue a liquor license for the sports bar. The Muslim health inspector has to walk into the pork barbecue joint. The pacifist Quaker has to issue the gun license.

And the Bible-believing Christian, who properly objects to the Biblical disconnect of gay marriage has a choice: compartmentalize and realize what is God’s and what is Caesar’s and issue the license, or leave a the job that requires it.

The arguments for all of these religious accommodations sound so fair and reasonable, for about ten seconds. The logic goes: Hey, don’t make the objecting employees do something against their will— find someone who can do it without a crisis of conscience.

This is for the birds.

Huckabee himself, in arguing for these set-asides in the Wednesday night debate, actually made my point superbly. He cited Fort Hood murderer Nidal Hasan, who was allowed to grow a beard against military regulations.

I know his wish was to say that if we make exceptions for terrorists, we should make one for Bible-believing clerks. But the inverse is actually the only way to go — no exceptions for anybody. Hasan should have been told we don’t do beards in the Army, and if that’s a problem, he shouldn’t have joined the military. When the rules are the same for everybody, there is no discrimination. When the rules are leapfrogged for some and not for others, it is a nightmare.

This road of religious accommodations is pockmarked with unacceptable potholes. One day we offer one to someone whose faith we admire or even share, the next day we have to dole one out to an adherent whose beliefs create absurd inconveniences for taxpayers.

Who convenes the panel to rule on which religious hesitations are okay and which are not? And while we can cheer one for the home team when a gay couple is turned away, wait until it’s you looking for a license for that second marriage, in violation of the thoroughly Biblical concept of one marriage for life, period. Is the clerk refusing that paperwork going to be showered with Kim Davis- caliber hero worship?

The religious accommodation fallacy says “no problem, we’ll just find someone who does not have that objection.” Just what we need: something to make interaction with government more inconvenient.

Religious accommodation is actually timid warfare. Instead of inviting a daily show of hands as to who will do the paperwork each day for the two guys or two ladies at the clerk’s counter, Governors in every disapproving state should have ordered every county clerk to refuse to issue such licenses, which are a document of state, not county, authority. Those Governors should have begged for court challenges, sparking a wave of state’s rights cases all destined for a Supreme Court hopefully bolstered by a President who will have successfully installed justices who actually rule on the Constitution and not the caprice of social experimentation.

Until then, whether it is a terrible law unjustly crafted and cleared, or a law we all admire and support, government employees have one choice: do their jobs. Those unable or unwilling have the option of finding the door and walking through it.

This suggestion has led to the incendiary question: Does this mean that Bible-believing Christians are barred from public service?

Of course not. But we are called to recognize that in our private lives, we call the shots and make the choices. Once we choose of our own free will to draw a paycheck from the government, we must realize that our personal beliefs may collide with what the law requires. if that is deal-breaker,. we can all become wedding photographers and turn away any business we please.

And when it comes to gay marriage in unwilling states, when the law requires things that are an offense to faith and additionally a constitutional travesty, the solution is not to pretend we are solving the problem by carving out special treatment for objectors. It is to do the heavy lifting and tackle the source of the problem: a judiciary (and a society) that is losing its grip on the responsibility to protect the Constitution from ideological mischief.