Bulletin: We Are Still at War 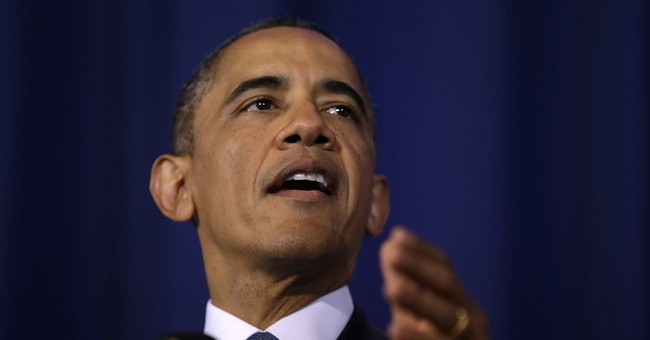 “By Allah, by the almighty Allah, we swear we will never stop fighting you.”

With those words Wednesday, the South London attacker with blood-soaked hands did us the favor of reminding us what we are up against.

Having just killed British soldier Lee Rigby in cold blood on a street in Woolwich, with his murder weapon still in hand, the latest face of jihad issued warnings to all of us on that now famous bystander video:

“Your people will never be safe,” he insists.

So: do we believe him?

We are either in a long war, fighting for enlightened civilization itself, or not. In 2008, America chose a president who believes we are not in a battle of such broad scope, and in 2012 the nation chose him again.

John McCain and Mitt Romney were not ideal candidates, but give them this: they approached global terror with a seriousness not seen since George W. Bush and Dick Cheney returned to private life.

Ah, Bush and Cheney, the much-maligned team that kept us safe for their entire remaining term after the 9/11 attacks showed us that radical Islam had been in a war with us for years and it was about time we engaged.

Unwilling to bother us with the truth of Benghazi weeks before an election, President Obama still seeks to paint us a picture of a war on terror firmly within his grasp.

Does anyone really believe that?

Yes, Osama bin Laden is dead, taken out by an Obama administration that has maintained enough Bush policies to complete the task of de-fanging al Qaeda along the Pakistan-Afghanistan border.

But energized by the unmistakable sound of U.S. withdrawal, terrorists have spread strongly across the rest of the Middle East, into Africa and Europe.

Which brings us back to London. If you were ever a tourist in that great city before, say, the 1980s, you would scarcely recognize it today. London, Paris and other urban areas of Europe have seen a wave of Islamic immigration, echoing the increasingly radical flavor of its main source, North African nations like Algeria, Libya and Tunisia as well as Nigeria, the apparent heritage nation of the Woolwich terrorists.

Such transformations are not limited to Europe. The Washington, DC suburb of Bailey’s Crossroads, Virginia was described in a 2007 editorial in Investor’s Business Daily as having been transformed into “Northern Virginiastan:”

“Baileys Crossroads is the heart of the Wahhabi corridor, which includes the safe houses where the hijackers stayed and the mosque where they and dozens of other terrorists have worshipped.

Another area mosque preached to members of the Virginia Jihad Network, who plotted to kill American soldiers after 9/11 and praised the space shuttle Columbia disaster as a 'good omen' for Islam.

Down the street is a Saudi charitable front for al-Qaida once run by bin Laden's nephew. The U.S. branch of the dangerous Muslim Brotherhood is in the same office park. Farther down in Alexandria is the Saudi madrassa that's graduated several terrorists, including the al-Qaida operative who plotted to assassinate President Bush...

In Baileys Crossroads, skinned goats are delivered daily to several halal butcher shops located in shopping centers where all the signs are in Arabic. Women shop in head-to-toe black abayas.

You'd never know this is a suburb of the nation's capital.”

Any area experiencing waves of Islamist immigration is going to get two things. Most numerous will be peace-loving, law-abiding people who happen to read the Quran and worship in mosques.

But among them will be an alarmingly high, and perhaps increasing number of current and future Islamo-fascists just biding their time to be the next street bombers, machete attackers or jet hijackers.

Bush and Cheney are gone, and so is our nation’s willingness to retain a war footing.

In the wake, we have a president whose Thursday speech on security was the usual eye-glazing combination of pretend bravado and foggy analysis.

While he explained and defended a drone program that is he has maintained to his credit, he surrounded those words with a song of surrender that surely sounded sweet to jihadists the world over.

His desire to close Guantanamo is all the evidence needed to bolster a case of nonchalance about global terror.

As former Defense Secretary Donald Rumsfeld has pointed out, the remaining Gitmo detainees are some of the most troubling. They are the ones who have not merited release in the last few years.

Those get-out-of-detention cards, by the way, have had a death toll. For all of his diligence in taking the war to the the enemy, The Bush administration prematurely released detainees who found their way back to the battlefield.

Now we face the prospect of outsourcing those detentions to countries like Yemen and Afghanistan, who can scarcely restrain the terrorist instincts of their own citizens.

Even the drone program is bound for the shelf. Examine the shackles President Obama attached to it moments after coherently explaining why it deserved to be maintained:

First, we will limit its use to when Americans are in imminent danger, an undefinable term;

Second, we will not use drones when capture is possible, a likelihood virtually impossible to gauge in the heat of a pursuit;

And third, we will try to ascertain the perplexing “near certainty” that no civilians will be killed. How near is “near?” Is the possibility of one civilian okay to take out a terrorist? Two?

This is the de facto dismantling of the drone program, detested by Rand Paul and Code Pink alike.

If we are serious about fighting terror, the only answer is yes.

I know how hard that is to hear. We like our wars short. We like to win and get to a surrender ceremony and get on with our lives.

The Obama approach to war fits nicely into the mood of an unplugged, inattentive America. War is hard. We don’t like hearing about it. We’re tired.

So when he tries to sell us a story of al Qaeda under control, soft-pedaling American terrorism like the Fort Hood shootings as “workplace violence,” giving flowery speeches telling us not to worry because our flag will ever wave free, many of us say thank you and go back to sleep.

The Obama White House then goes back to focusing on the groups it considers far more threatening-- its political opponents. They are happy. And the last two elections show that we are happy. Or happy enough.

Too many of us are happy to neglect a war that our enemy is still fighting against us. The administration is happy to pursue jihad as if it were some organized crime syndicate, seeking to restrain and prosecute it in the courtrooms of our judicial system.

But the men who killed the soldier in London, and the man who killed fellow soldiers in Fort Hood, and the brothers who killed Boston Marathon spectators, are not street criminals, they are enemy combatants.

Countless allies are with them in their war against us, with a goal of crushing our way of life with the sledgehammer of a new Muslim caliphate.

We either grasp that or we do not.

Having seen actual blood on the hands of an actual terrorist this week, we should not want to see the blood of neglect on our own hands, spread there by our failure to wake up and protect ourselves.