God Creates Us Free and Equal, But It's Not Good Enough for Liberals 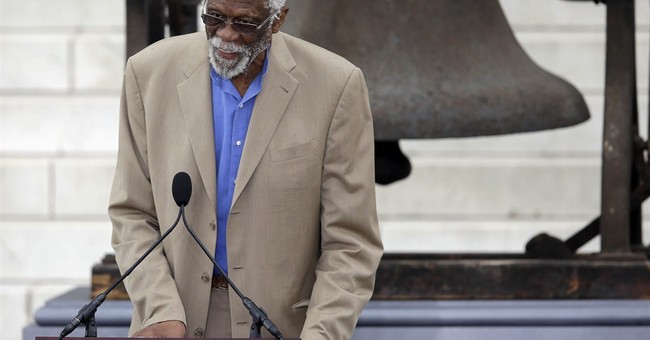 The good old United States of America has enjoyed 232 years of exceptionalism thanks to the course set for her by the 56 signers of the Declaration of Independence.  The Founders had peered thousands of years into the past and understood the timeless principles of Natural Law.

With the Atlantic Ocean providing a buffer, Thomas Jefferson and the boys had the unique opportunity to take a giant leap forward in civilization.  Unlike the typical conquering of a new territory to impose a replacement ruler, the founders seized the opportunity of a clean slate to embrace Eden.

The Declaration of Independence was an elegant revolution from King George III’s monarchy.  It began with, “When in the Course of human events it becomes necessary for one people to dissolve the political bands which have connected them with another and to assume among the powers of the earth, the separate and equal station to which the Laws of Nature and of Nature's God entitle them, a decent respect to the opinions of mankind requires that they should declare the causes which impel them to the separation.”

The new nation was founded on the Laws of Nature, with the authority of the Creator who intended for their enjoyment to all mankind.  Jefferson had not made this stuff up.  He had studied the science of two thousand years of pursuing that understanding.

Theorizing about Natural Law appears to be quite natural in of itself.  Studies and philosophies of the existence of Natural Law are as old as Western Civilization.  The idea is that, apart from force and religious beliefs, humans generally expect and respect certain prerogatives for themselves and others.  Even Aristotle pressed that the intention of human design could be observed through peoples’ global, natural tendencies.

The concept of Natural Law has been studied and debated by notable philosophers for centuries.  And perhaps the single greatest point of debate is whether there is an effect for the cause.  In other words, is there a Creator of humans who intended this Natural Law?  Some have denied a deistic cause, but the argument collapses under the weight of reason.  Even one of the earliest observers on the topic, Greek philosopher Heraclitus (560BC-480BC) wrote, “For all human laws are fed by the one divine law.”

Thomas Aquinas (1225–1274) advanced the theory in the 13th Century with inspiration from Plato and Aristotle, some 1,600 years earlier.  Aquinas’ typology asserts that Natural Law has three counterparts: Eternal Law, encompassing the natural sciences (physics, chemistry, biology); the Divine Law, defining eternal happiness through theological virtues of faith, hope, love; and Human Law, that which is instituted by governments.  Eternal Law is the root of the other three laws.  Therefore, the only legitimate Human Law is one that reflects the rational order and divine wisdom of the Creator.

Thomas Hobbes (1588-1679) is the author of the famous book on social contract theory, Leviathan.  Hobbes explored libertarian ideas, a civilization without government, and concluded that such an environment would be chaotic and untenable.  But his rejection of the tenet that man is basically good was displaced by recognizing the constructive characteristic of man tending to act in his own self-interest.  Hobbes concludes that humans will deliberately interact respectfully toward the ultimate goal of benefiting themselves and their interests.

It was John Locke (1632-1704) who laid the contemporary tracks for Thomas Jefferson’s writing of America’s founding document.  Stanford’s Encyclopedia of Philosophy portrays Locke with a near word-for-word outline of the Declaration of Independence, “he defended the claim that men are by nature free and equal against claims that God had made all people naturally subject to a monarch. He argued that people have rights, such as the right to life, liberty, and property, that have a foundation independent of the laws of any particular society. Locke used the claim that men are naturally free and equal as part of the justification for understanding legitimate political government as the result of a social contract where people in the state of nature conditionally transfer some of their rights to the government in order to better ensure the stable, comfortable enjoyment of their lives, liberty, and property. Since governments exist by the consent of the people in order to protect the rights of the people and promote the public good, governments that fail to do so can be resisted and replaced with new governments. Locke is thus also important for his defense of the right of revolution.”

And so it flowed from Jefferson’s quill, “We hold these truths to be self-evident, that all men are created equal, that they are endowed by their Creator with certain unalienable Rights, that among these are Life, Liberty and the pursuit of Happiness. — That to secure these rights, Governments are instituted among Men, deriving their just powers from the consent of the governed.”

Natural Law preserves each person’s right to define and pursue happiness.  The state exists to ensure that one person’s pursuits do not prevent another person’s life, liberty, or pursuit.

Next week: Understanding America’s evolution away from Natural Law.