The Few, The Loud, The Anti-Fossil Fuel Crowd

Marita Noon
|
Posted: Aug 16, 2016 12:01 AM
Share   Tweet
The opinions expressed by columnists are their own and do not necessarily represent the views of Townhall.com. 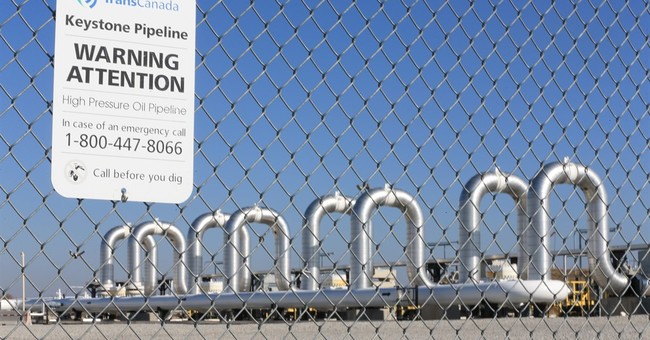 If you get your news from the mainstream media, you likely think the views expressed by the environmental activists represent the majority of Americans. After all, their highly visible protests against the Keystone pipeline—sit-ins in front of the White House, locking themselves to the White House fence and then being arrested for it, and parading down the National Mall carrying a huge inflated tube emblazoned with the words: “Just say no to Keystone”—were effective. Despite repeated polling that showed a majority of Americans supported the pipeline, with a small minority opposed, the loud theatrics of the anti-fossil fuel crowd eventually won out. After years of stall tactics, President Obama finally bowed to their demands and said no to the job-creating infrastructure project.

Earlier this year, the usual group of suspects, led by well-known anti-fracking activist Bill McKibben, planned a “global wave of resistance” called BreakFree2016—scheduled to take place from May 3-15—on six continents. The event’s website announced the various activities, including an appearance and speech by McKibben, a Vermont resident, at the Colorado rally that promised: the “largest mass mobilizations for climate action in the history of Colorado.” It confirmed that there would be “civil disobedience.”

Did you hear about it? Probably not.

A news report of the planned Colorado activities said: “And on May 14, 350 Colorado is planning a day of speeches, live music and activities protesting oil and gas developments close to neighborhoods and schools in Thornton. The goal is to draw 1,000 people to the upcoming events.” The website, post-event, states: “about 800 people joined the action throughout the day” with “about 30-40 people” still there at the end of the day for the dramatic “frack-site” invasion. Yet, as even their own Facebook page photos indicate, not even 100 were present for the big McKibben speech. Without vendors and media, he may have had no audience at all.

After flying in to Denver, and then being driven to the protest site in a limousine, McKibben jetted off to Los Angeles, California, where he was joined by the greens’ “Daddy Warbucks,” billionaire political campaign donor Tom Steyer—with much the same results: a few hundred protesting fossil fuels and, as Energy In Depth reported, “the very social and economic underpinnings of liberal democracy.” The typical anti-everything protestors were present—but only a few.

In Iowa, as I addressed last week, a meeting of the Bakken Pipeline Resistance Coalition—which according to the organizer includes those with “concerns about the impact it could have on the environment, farmers who worry about their cropland and religious groups who view expanding use of fossil fuels as a moral issue because of climate change”—expected a crowd of 200. Instead, according to the Ottumwa Courier, “only 40 or so were seated when the meeting began. Others trickled in as the meeting progressed.”

Now, Colorado is ground zero for “one of the biggest environmental fights in the country this year,” as Lauren Petrie, Rocky Mountain region director for Food and Water Watch, a Washington, D.C.-based group advocating for safety in food production and oil and gas production, called it. Two ballot initiatives, 75 and 78, have the potential to, according to Colorado regulators, “effectively halt new oil and gas development in as much as 90 percent of the state.” In order to get the initiatives on the ballot, 98,492 valid signatures needed to be turned into the Colorado Secretary of State by August 8—no later than 3:00 p.m.

In June, The Tribune reported that Tricia Olson, who has pumped in most of the funding for a group backing initiatives 75 and 78, hoped to “collect 160,000 signatures to account for the invalid signatures that inevitably pop up.” (Politico just announced: “recent campaign finance reports were filed with the Colorado secretary of state, the Sierra Club gave $150,000, making it the largest singlereported contributor to the anti-fracking effort.”)

Because the Colorado Supreme Court, in a unanimous decision on May 2, declared local fracking limits “invalid and unenforceable,” as state law trumps local ordinances, Olson sees the ballot initiatives as their “last ditch effort.”

On Monday, August 8, exercising stagecraft, at 2:30 p.m., dozens of supporters emptied a U-Haul truck and delivered box after box of signatures to the Secretary of State’s office. They celebrated their “victory.” 350 Colorado, one of the groups behind the measures, proclaimed: “We did it! Over 100,000 signatures delivered on initiatives to limit fracking!”—not the 160,000 originally hoped for, and likely not enough to get on the ballot in November.

By CBS Denver’s accounting about 105,000 signatures were turned in—most in half empty boxes. Lynn Bartels, Colorado Secretary of State Communications Director, tweeted: “Proponents of fracking measures turned in lots of boxes with very few petitions in them.” Once the petitions were consolidated, there were roughly 50 empty boxes. Simon Lomax, an associate energy policy analyst with the conservative Independence Institute in Denver and a consultant who advises pro-business groups, said: “To make it look more impressive they added a bunch of empty boxes, or boxes with very few petitions. It just sort of shows, these groups don’t do substance, they just do deceptive publicity stunts.”

On CBS Denver, former Secretary of State Scott Gessler explained that you need about 98,000 signatures to get on the ballot because, for a variety of reasons, at least 30 percent are rejected, you need to submit at least 140,000. He says that for the 105,000 signatures turned in to qualify would be “unprecedented,” something that “has never occurred in Colorado for a ballot initiative.” According to Gessler, the effort is “doomed”—though we will not know for sure until next month when the final counts are released.

Noted election reporter and national affairs columnist for the National Review, John Fund, told me: “If there is enough public support for an issue to get the votes needed to pass, getting a surplus of signatures to get it on the ballot is an easy task.”

Many Democrats, including Governor John Hickenlooper, support hydraulic fracturing and have come out against the ballot initiatives. Politico posits that because mainstream environmentalists “fear that their movement will suffer a demoralizing defeat if the two proposals make it in front of the voters,” they “hope the ballot initiatives will die instead.”  Additionally, “A decisive referendum on oil and gas production would increase calls for [Hillary] Clinton to explicitly take a side.” She’s previously aligned with 75 and 78—which could spoil her attempts to attract moderate Republicans she’ll need to win the state.

Despite their drama and declared “victory,” it doesn’t seem that the Colorado anti-fossil fuel crowd has enough signatures, or support, to make it onto the November ballot. They may be loud, but, alas, they are few.
Here's the Twitter Thread That Tracked Joe Biden's Peddling of Liberal Media Conspiracy Theories Last Night
Matt Vespa
Regarding Who Won the First Debate, Telemundo's Poll Offered Some Very Bad News for Joe Biden
Matt Vespa
WATCH: Kamala Harris Attempts to Do Damage Control Following the First Presidential Debate
Beth Baumann