The Pipeline’s Approved. Environmentalists Are Angry.

Marita Noon
|
Posted: Aug 09, 2016 12:01 AM
Share   Tweet
The opinions expressed by columnists are their own and do not necessarily represent the views of Townhall.com. 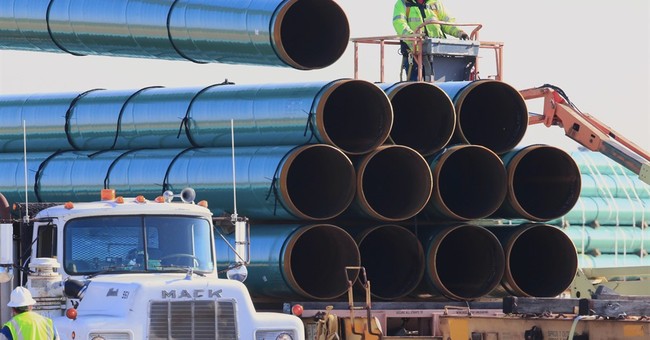 Final federal approval for what is being called the “new Keystone” came from the Army Corps of Engineers on July 26—allowing the pipeline to move forward. The 1,168-mile long Dakota Access Pipeline (DAPL), also called the Bakken Pipeline, is comparable in length to the Keystone XL. It will cross four states and carry 450,000 barrels of oil a day from North Dakota to a transfer terminal in Illinois where it will connect with other pipelines and be taken to refineries.

The $3.8 billion dollar project has pitted environmentalists against economic interests.

During the Keystone fight, outspoken opponent Jane Kleeb, founder of Bold Nebraska, said: “In America we should be focused on making sure that the oil in North Dakota, Oklahoma, and others, in Montana, that that oil is getting to market.” Now, thanks to DAPL, America’s oil will have a safer way to get “to market”—freeing up as many as 750 train cars a day to transport corn, soybeans, and grain. However, as soon as DAPL came on the scene, they moved the marker, and environmental opposition was mounted. Bold Iowa, a group that shares a website with Kleeb’s Bold Nebraska, says it has members willing to risk arrest in “nonviolent protests.” They are also training monitors to report any environmental violations or hazards.

On August 1, nine pieces of heavy equipment—excavators and bulldozers—were set on fire at three different DAPL construction sites, causing $3 million in damage. At the time of this writing, no arrests have been made. Additionally, protestors have gathered on the grounds of the North Dakota Capitol, calling for Governor Jack Dalrymple and legislators to put a halt to construction of the pipeline until their lawsuits are addressed.

On its “Stop the Bakken Pipeline” page, the Iowa Sierra Club posted: “A new pipeline will delay the US transition to clean and renewable energy and more fuel-efficient vehicles. The United States needs to move away from fossil fuel extractions and to energy sources that have less impact on climate change.”

The Club’s position sounds a lot like Hillary Clinton’s. When she finally came out against Keystone, she said: “We need to be transitioning from fossil fuels to clean energy.” She called the pipeline “a distraction from important work we have to do on climate change.”

Opposition, however, is not as broad-based as the environmental groups had hoped for. At an April meeting of the Bakken Pipeline Resistance Coalition in Iowa, organizers were disappointed. Chairs were set up for 200, but only about 40 “trickled in.” In the four states the pipeline will cross, more than 90 percent, on average, of the landowners signed the voluntary easement agreements.

At its peak, the DAPL’s construction is expected to involve as many as 4000 workers in each state and will require the purchase of $200 million in American-made heavy construction and related equipment from Caterpillar, Deere, and Vermeer.

Cory Bryson, Business Agent for Laborers Local 563 reports: “We’ve been inundated with calls from all over the country from people wanting to work on this pipeline project. Mainline pipeline projects like Dakota Access provide excellent working opportunities for our members and tremendous wages. The Laborers excel at this work.” No wonder men and women want to travel to the pipeline’s locale, some workers, most without college degrees, brag about banking $2-5000 a week.

In Illinois, the Jacksonville Area Chamber of Commerce has assembled hundreds of packets with information including restaurants, health-care facilities, RV sites, and Laundromats. Executive Director Lisa Musch reports that her office has been receiving calls for months from people looking for rental properties. Teriann Gutierrez, owner of Buena Vista Farms, a resort-campground, and a retired plastics engineer, says: “I’ve been full since the beginning of April.” She told me the boost in population is bringing a lot of money into the community that has been hit hard with the loss of manufacturing jobs. DAPL is putting a lot of local people to work. Gutierrez is very thankful as the boom means she’ll be able to pay down debt.

“Like any major construction project, the DAPL will create, and more importantly maintain, high paying American jobs throughout the supply chain and throughout the nation,” North Dakota’s at-large Congressman Kevin Cramer said. “I’ve seen the crews that work on building the line and they take great pride in their craft. They spend money in local, usually rural, communities throughout the route. The steel suppliers and equipment manufacturers and distributors are just a few of the links in the chain. Everybody from fry cooks to hotel owners to financers are affected. Perhaps, most importantly, in a low price crude market, the economics of moving oil by the most efficient and safe manner possible preserves jobs on the production side of the equation as well.”

While DAPL is already creating lots of jobs, it is just one of many pipeline projects in the works that could be bringing much needed economic development to other communities and high-paying jobs for American workers. Gutierrez explained that, according to the workers staying at Buena Vista Farms: “The hardest thing is getting the permits. The long process holds up jobs.” Apparently, many of them made reservations but, then, had to delay them—and delay starting to work on the pipeline—because the permits hadn’t been approved as expected. It doesn’t have to be that way. Under President Obama, permitting for oil-and-gas activity has been slow-walked. Jobs have been held up.

Donald Trump has made clear that he’ll support pipelines and said he’ll invite TransCanada to reapply for the Keystone permit. On the other side, Clinton opposed Keystone and supports moving away from fossil fuels. Secretary of State John Kerry, Clinton’s successor, has implied that with “some 300 pipelines” we really don’t need any more. He said: “it’s not as if we’re pipeline-less.” A Clinton administration would likely extend the Obama delay tactic.

Whichever candidate wins in November will appoint agency heads who support his or her views—thus driving the policy direction.

Like Gutierrez, union members are grateful for the jobs. Last week, Dave Barnett, Pipeline Representative for the United Association of Journeymen and Apprentices of the Plumbing and Pipefitting Industry, told me: “We are pleased that the thousands of job opportunities associated with these projects are being decided on their need and merits, not on political pressures by extremists as the Keystone XL was.”

Whether the thousands of additional job opportunities materialize depends on American voters. Will we vote for pipelines that fuel the American economy and transport our natural resources safely and cheaply? Or, will we block job creation and economic development by voting with the environmentalists who want to “keep it in the ground?” In less than 100 days, we’ll have the answer to these important questions.
How Trump Plans to Wreak Havoc on Social Media Companies
Beth Baumann