Get Rid of Ethanol Exchanges Too 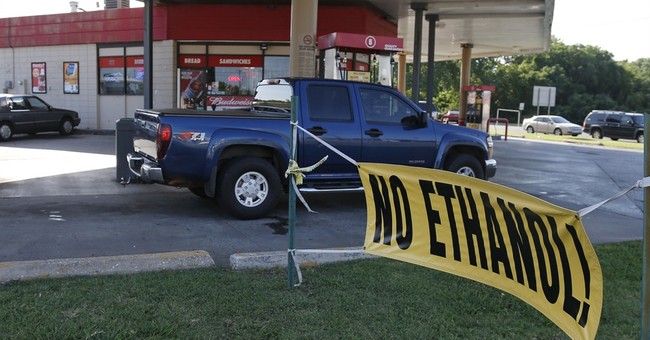 Poll after poll shows that the majority of Americans have an unfavorable view of Obamacare. If it were front and center of the newscycle, as Obamacare is, most would also have the same repeal-or-revise attitude regarding ethanol mandates as the two are marching hand-in-hand. In addition to the odd collection of opponents—conservatives and unions in opposition to Obamacare; and environmentalists and big oil, auto manufacturers and anti-hunger groups oppose ethanol—there are numerous other similarities.

Sounds good at the start

Healthcare for all sounds like a good idea, after all who wants to tell a mother holding a sick child that she can’t get care? Likewise, homegrown fuel that will increase America’s energy independence, sounds good—especially when the Renewable Fuel Standard (RFS) was passed by Congress as part of the Energy Policy Act of 2005. The RFS mandates a minimum volume of biofuels (generally corn-based ethanol) is to be used in the national transportation fuel supply each year. Two years later, the Energy Independence and Security Act of 2007 greatly expanded the biofuel mandate volumes and extended the date through 2022. The expanded RFS required the annual use of 9 billion gallons of biofuels in 2008, rising to 36 billion gallons in 2022, with at least 16 billion gallons from cellulosic biofuels, and a cap of 15 billion gallons for corn-starch ethanol.

At the time, US oil imports were growing, fears of shortages due to so-called peak oil were rampant, and the combined technologies of horizontal drilling and hydraulic fracturing weren’t yet widely used and had not unleashed the current abundance of US resource. Growing our gasoline—converting corn from the heartland into ethanol—sounded good. Today, the Renewable Fuels Association claims that the RFS has reduced America’s foreign oil dependence. Perhaps that is true, but unlocking federal lands, expediting permitting for drilling, and approving the Keystone pipeline could totally remove our reliance on Middle Eastern oil in as few as three years.

Have had their day on court

Virginia Attorney General, and gubernatorial candidate, Ken Cuccinelli was the first to file a lawsuit against Obamacare—which the Supreme Court ultimately declared a tax. On October 8, the American Petroleum Institute (API), once again, filed a lawsuit in the DC Circuit Court against the Environmental Protection Agency (EPA) over the RFS volume requirements for 2013. A similar suit was filed in 2012. On January 25, 2013, the US Court of Appeals rejected EPA’s 2012 mandate for refiners to use cellulosic biofuel, which was not commercially available. In response to the court’s decision, Bob Greco, API Group Downstream Director, said: “This absurd mandate acts as a stealth tax on gasoline with no environmental benefit that could have ultimately burdened consumers.”

While both Obamacare and the RFS were passed by Congress, the particulars are left to government agencies to regulate. With the RFS, the EPA has missed statutory deadlines for issuing RFS volume requirements and then released rules mandating that refiners use 4 million gallons of cellulosic biofuel in 2013. Yet, according to the EPA, only 142,000 gallons have been available for refiners to blend so far. Reports indicate that for 2014, the target for cellulosic biofuel would be 23 million gallons—despite the fact that the fuel is virtually nonexistent. The EPA has ignored the 2012 Court of Appeals smack down in which Judge Stephen Williams said the law was not intended to allow the EPA to “let its aspirations for a self-fulfilling prophecy divert it from a neutral methodology” and has again set advanced biofuel targets that are out of touch with reality.

While the Obamacare exchanges have not been working as expected—with Blue Cross & Blue Shield of North Carolina reporting only one person enrolled after 24 hours, US Secretary of Health and Human Services Kathleen Sebelius admitted to Jon Stewart that if someone doesn’t participate “they pay a fine.” Guess what? Even though there isn’t enough cellulosic ethanol to meet the EPA mandates, refiners are required to blend it into gasoline—and, if they don’t, they pay a fine.

Obamacare has created a whole new set of problems such as doctor shortages, reduced work hours, and sticker shock. The RFS, also, brings a host of unintended consequences:

•Ethanol reduces miles per gallon—At a time when the White House has upped the MPG a vehicle gets (known as the CAFE standards) it is also mandating the use of ethanol, which lowers MPG. Edmunds did an apples-to-apples comparison of gasoline vs. ethanol (using a flex-fuel vehicle and E85). They conclude: “The fuel economy of our Tahoe on E85, under these conditions, was 26.5 percent worse than it was when running on gas”—and cost about $30 more. Plus, Edmunds found that the carbon emissions savings was negligible. (Note: less than 7 percent of the US vehicular fleet is flex-fuel.)

•Ethanol mandates have devastated the dairy industry (and turkey growers are none too happy, either)—In rural California, dairy farmers have been deeply affected by the rising cost of feed (which has jumped as much as 240 percent since 2005) brought on by mandated ethanol blending by the RFS. John Taylor, who owns and operates Bivalve Dairy with his family, says: “If there’s a requirement to have ‘X’ amount of tons of corn go into renewable energy, that’s just going to reduce the supply…that’s only going to make the price go up for [dairy farmers]…I’m not sure we should be taking our food and putting it into energy.”

California Assemblywoman, Kristin Olsen, reports: “The competition between the corn market and the government corn ethanol mandate is creating grave challenges for our California farmers, and their ability to feed their livestock and, ultimately, the nation.”

About the turkeys, Damon Wells, vice president of government affairs, National Turkey Federation, adds to the discussion. “Too often they’ve tried to say that this was a petroleum vs. ethanol fight. I take great exception to that. I think those in the animal agriculture industry take great exception to that because all of the benefits that have come from this Renewable Fuel Standard have transferred off the backs of small farmers all across this country that are feeding livestock and poultry and ultimately it’s a transfer of cost from one agricultural sector to another.”

•Ethanol damages small engines and outdoor power equipment—In my book Energy Freedom, I have an entire chapter on ethanol. For it, I interviewed Abe at K & S Services Center in Albuquerque, NM—which specializes in small engine service and repair. He told me that 85 percent of the repairs they do are caused by fuel problems. Because of the increased ethanol in the fuel available at gas stations, Abe’s had to change his warranty policy and the center no longer warranties fuel-related damages. For his customers, many of whom are in the lawn-care business, the ten-percent ethanol in gasoline doubled their repair costs until they learned about its hazards and quit using it—converting to more expensive (but cheaper in the long run) pure gasoline.

Kris Kiser, president and CEO, Outdoor Power Equipment Institute, affirms Abe’s observations: “Our small-engine industry and products … is sort of where the RFS meets reality. … you’re introducing fuel to the marketplace for which all of this stuff is not designed or warranted to run on. … You have product failure. Failure can mean economic failure or it can mean safety failure. … There’s a half-billion in engine products in the marketplace today not built or warranted to run on E15.”

Whether or not you agree with Ted Cruz’s tactics regarding stopping Obamacare, you likely agree with this statement he made about it: “In modern times no major entitlement, once it was implemented, has ever been unwound.” Surprise! The same can be said about the RFS. My friend and colleague, Paul Driessen has penned an excellent column on ethanol in which he addresses “how hard it is to alter policies and programs once they have been launched by Washington politicians, creating armies of special interests, lobbyists and campaign contributors.”

We surely see what Driessen is talking about in an October 11, letter from Governor Terry Branstad (R-IA), published in the Wall Street Journal. In Ethanol Promotes Consumer Choice, Branstad defended the benefits of his state’s leading crop: “It is the ethanol industry, which makes a cheaper, cleaner and higher-octane product, that is ready, willing and able to face free-market competition.” To which a reader, Charles Pierce, responds: “I do not know what planet the Governor is living on but when the Federal Government forces the adding of ethanol to motor fuels there is no choice. It is just like the PPACA [Obamacare] it is a tax that is paid by each consumer being forced to buy a product that the government set up or likes. Want free choice; want cheaper motor fuels? Make it an option, not a mandate.”

When Republicans who generally oppose mandates and subsidies, like Gov. Branstad, Sen. Grassely, and Rep. King, support continuing the RFS, we can surely see the influence of “special interests, lobbyists and campaign contributors,” as a result of federal involvement in what should be a market-based solution.

“Despite over 7 years of effort and the expenditure of about $603 million, the Department had not yet achieved its biorefinery development and production goals,” a report released in September revealed.

It is time to repeal—or at least revise—the costly RPS boondoggle. Fortunately such a plan is on the table. The RFS Reform Act, co-sponsored by both Democrats and Republicans, proposes to eliminate the conventional biofuels mandate and cap the amount of ethanol that can be blended into the fuel supply. Call your Senators and Representatives and tell them to end this eight-year-old policy failure.

We may not be able to repeal Obamacare, but with your help, reforming the RFS can be a reality.