Marina Medvin
|
Posted: Oct 15, 2020 12:01 AM
Share   Tweet
The opinions expressed by columnists are their own and do not necessarily represent the views of Townhall.com. 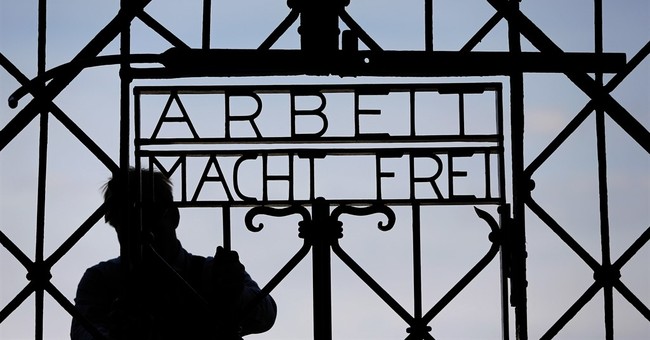 In a never-before-published letter to his family, American soldier Leon Morin reveals something that has been hidden in a dark corner of history: the Nazis, who committed the most gruesome atrocities against 6 million Jewish people, would simultaneously “receive God” on Sundays in beautiful churches built in the concentration camp Dachau.

On July 9, 1945, about six weeks after the U.S. liberation of Dachau, Leon Morin penned a 10-page letter to his family describing his observations of the “worst” concentration camp, Dachau. “… [I]t will take 12 pages like this one to just give an idea about the best organized butchery in the world,” he wrote.

“The gruesome part was how they killed those people. Either by torture by the firing squad, mutilation with starved bloodhounds of which each camp had about fifty or sixty, and by mass gas poisoning …” he lamented.

Much of the unspeakable torturous activities of the Nazis have been documented and taught. But the religious beliefs of the Nazis remain rarely discussed.

Leon Morin documented this in his letter.

“For instance nobody ever mentioned that right among those chambers of horrors stand beautiful churches where these same soldiers of the Reich used to receive God every Sunday and where those same churches are always packed up with people every day of the week. I can’t understand that and there’s nobody in the American Army who does either.”

Martin Luther, the German theologist and seminal figure of the German Reformation, influenced the German hatred of their Jewish neighbors starting in the early 1500s. In 1543, Luther authored Von den Jüden und iren Lügen (On the Jews and Their Lies), in which he called for the burning for Jewish synagogues, prohibition of Jewish religious practice and preaching that would be punishable by death, prohibition of Jewish residence near Germans, and confiscation of Jewish property and valuables. Luther successfully had Jews expelled from Saxony.

Martin Luther’s teachings of virulent antisemitism were the primary foundation of Nazi beliefs. Hitler’s restatement of Luther’s writings on his path to power was but a regurgitation of Lutheran theology and reinforcement of hundreds of years of festering antisemitism.

Americans repeatedly comment when viewing evidence of the Holocaust, “how could this have happened?” The answer lies in history that we keep muted. The Nazi enslavement, torture, and murder of the Jewish people in their quest for genocide were but a natural progression of their long-held religious beliefs.

But why isn’t this discussed in America? Indeed, why is it that most American Lutherans, members of my family included, do not know of the antisemitic beliefs of Martin Luther? “Maybe we’re too narrow minded in America,” wondered Leon Morin. Why is it that nobody in the press ever mentioned the churches? Has our news always been “fake news” and we just now wised up to it?

Were American reporters covering up the story?

American Lutheran and Protestant churches did not hold the hateful beliefs of German Lutherans. In fact, American Lutherans are not known as prejudiced towards Jews. But maybe seeing your own religious beliefs smack in the middle of death camps gave too much pause to the reporters.

The uncomfortable history remains: members of the German Protestant clergy actively supported the Nazi regime and their detestable beliefs. It is thus understandable how the Nazi monsters who would kill children with their families just for being born Jewish would feel no conflict in “receiv[ing] God every Sunday.” At the same time, American Protestants were shielded from the beliefs of their German counterparts. That is why it is unsurprising that Leon Morin wrote about his failure to understand.

Lutheran churches throughout the world have in recent years issued statements apologizing for the Holocaust. In 1982 the Lutheran World Federation issued a consultation stating that "we Christians must purge ourselves of any hatred of the Jews and any sort of teaching of contempt for Judaism.” In 2015, the German Protestant church formally denounced Martin Luther’s antisemitic teachings while tepidly accepting blame for ideas that led to the Holocaust. “We cannot ignore this history of guilt,” the church wrote. “Luther’s view of Judaism and his invective against Jews contradict our understanding today of what it means to believe in one God who has revealed himself in Jesus, the Jew.”

Is This the Most Nonsensical Headline Yet About the COVID Vaccine?
Townhall
Wil Wheaton says 'f**k EVERYONE at Netflix' behind comedy festival featuring 'despicable bigot' Dave Chappelle
Twitchy
It's Over for Kamala
Redstate
Reps. Greene and Gohmert Finally Met the J6 Political Prisoners: What They Saw Isn't Pretty
PJ Media