Marina Medvin
|
Posted: Dec 30, 2019 12:01 AM
Share   Tweet
The opinions expressed by columnists are their own and do not necessarily represent the views of Townhall.com. 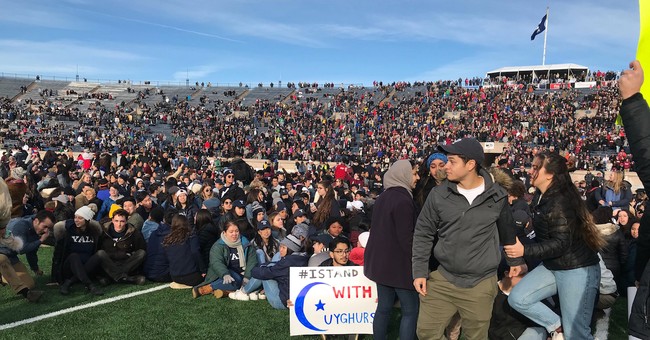 For decades we have said that there is a liberal slant in education, a leftist bias. But the concept of tacit liberal influence is in the distant past. Today, liberalism is at the forefront. Liberalism is the curriculum.

Grade schools throughout the country are rewriting their history curriculums based on today's leftist politics. Some Illinois, New York and New Jersey public schools are teaching a collection of New York Times leftist opinion essays known as the 1619 Project as factual objective history. This leftist propaganda project audaciously rewrites our history as a country that was started as a "slavocracy" in 1619 and attempts to prove that "nearly everything that has made America exceptional grew out of slavery." Select Vermont, Oregon, California, and Washington state public schools will be teaching "social justice" and "institutionalized racism" in place of mathematics, because, wait for it ... math is racist.

And, a growing list of private schools throughout the country are rolling out the Pollyanna curriculum, which teaches kids that "racism is a primary institution of the United States" and requires political compliance by students for "rectifying current social ills, such as learning and planning how to carry out anti-racist activism and/or social advocacy." According to multiple parents who pay to send their children to one of these schools, conservative students are being discriminated against when they voice objection to the politics of such a curriculum. A white student was told to "go home" and "check your white privilege," upon questioning a teacher on the suspicious similarity between "equity" and socialism, a private school parent reported to TownHall. The parent advised that this teacher was not disciplined after complaints from parents and continues to "educate" the students. Another parent reported that a conversation with administrators about concerns with the racially charged curriculum resulted in a response indicating that the complaining parent was implicitly biased, just as Pollyanna prophecies.

Race-baiting has effectively replaced history class (even math class for some). But classroom indoctrination isn't enough. The leftist puppeteering is only effective if it transcends the bounds of schoolhouses.

Virginia public schools are now encouraging students to engage in protests — giving them an excused absence if they go. Pollyanna, for private schools, begins indoctrinating protest as a tool for the effectuation of liberal policy in the Third Grade, in a lesson that teaches 8-year-old children "how we can be agents of communal, social, political, and environmental change." The neoliberal politician behind Virginia's new protest policy hopes this trend will catch on. "I think we're setting the stage for the rest of the nation with this," he told the Washington Post. "It's a dawning of a new day in student activism, and school systems everywhere are going to have to be responsive to it." He tweeted that his policy was in response to a "steady rise in student activism." Back in September, New York City public schools excused absences for kids who skipped school to protest climate change. Last year, Massachusetts private schools excused absences for gun control walkouts. CNN and other leftist media outlets encouraged a "National School Walkout" and taught kids about their "rights."

All excused school absences discussed in national news have been for liberal causes.

Experts agree, a policy that excuses absence for protest is likely to favor liberal students. "People who call themselves conservatives probably do still count respecting authority — staying in school — as a crucial and central tenet of the social order," said Thai Jones, a lecturer at Columbia University who studies radical social movements. Indeed, it is common knowledge that conservatives do not engage in protests or mass public displays in the same way as liberals. Unsurprisingly, conservatives are the ones outraged at the new school curriculums and policies.

In context, a left-favoring protest policy is but a crumb of the poisonous leftist cake that has been baking for decades in American schools. Liberal politicians and teachers have completely mobilized our schools as leftist training grounds. American children have been placed on the frontlines of leftist political battles; our children have been brainwashed into liberal fighting machines. Leftists are successfully manipulating our children, one mind at a time. The 2019 YouGov poll of Millennials showed that 70% are likely to vote socialist. American leftists are becoming as effective at scholastic brainwashing as the socialists in the USSR, China, and East Germany.

What will be the next chapter of American history? Are we the next Venezuela?