Marina Medvin
|
Posted: Apr 18, 2019 12:10 PM
Share   Tweet
The opinions expressed by columnists are their own and do not necessarily represent the views of Townhall.com. 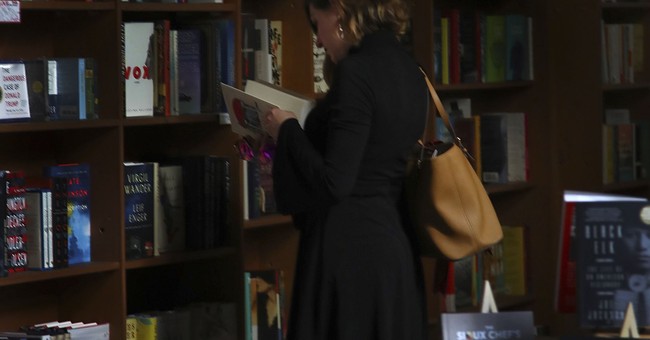 Library Journal is a trusted publication for librarians which was founded in 1876 by Melvil Dewey, the white man [race relevant for purposes of this commentary] who created the Dewey decimal system. It has remained one of the most trusted voices in literary news and analysis. This week, the journal tweeted: "Library collections continue to promote and proliferate whiteness with their very existence and the fact that they are physically taking up space in our libraries." The journal's Twitter account then linked to an article written by a Sofia Y. Leung, who describes herself as an "academic librarian" and lists intersectional feminism, social justice, and cats as things she likes.

Leung explains that most publications found in libraries "are written by white dudes writing about white ideas, white things, or ideas, people, and things they stole from POC and then claimed as white property." She goes on bashing "whiteness" and then quickly determines that "[l]ibrary collections continue to promote and proliferate whiteness with their very existence and the fact that they are physically taking up space in our libraries."

Leung advises that she is still mulling over this topic, and is open to commentary, but only to commentary that bolsters her arguments against proliferate whiteness. "I’m less interested in hearing that you don’t buy it, so don’t bother with those types of comments," Leung writes dismissively.

Leung's blog post is just that: a blog post. It is not a literary article, not an eloquently composed memoir, nor a trusted source of wisdom. Instead, it is a quick jot of thoughts. Leung is undoubtedly entitled to her misguided opinion, as I am to critical judgment of the same. But Leung's racist assessment is not what concerns me; it is Library Journal's adoption and dissemination of the racist analysis that is of concern.

Library Journal reaches an undisclosed amount of subscribers, 202,000+ Twitter followers, and gives out notable prizes such as Librarian of the Year. Yet, Library Journal felt comfortable adopting unabashedly racist ideology and intentionally spreading it to their followers as acceptable, mainstream discussion. It has become entirely reasonable and standard for leftist individuals and groups to profess racist, anti-white ideology without a second thought to the consequences. History has taught the neo-left absolutely nothing.

Distraught individuals reading Library Journal's Twitter post quickly began drowning the indignant tweet with commensurate outrage. Library Journal responded to the negative feedback two days later by retweeting a meme with the word "Trash!" and a comment by another Twitter user that states, "How wow are people triggered by the fact that white authors and content take up too much space and librarians want to make room for more diverse collections by removing some of those titles... Shocker: librarians throw away books. I weed, gleefully." The retweet indicating that Library Journal supports and encourages librarians to trash, throw away, literary publications written by Caucasian authors.

That is a shame. U.S. libraries are funded with taxpayer dollars, both through federal taxes and local state taxes. Any publicly-employed librarian who would destroy publicly-purchased property due to the fact that it was written by white authors would be engaging in discriminatory practices on the basis of race. Civil litigation or criminal charges might follow such conduct. State statutes penalizing official duties violations and criminal hate crime charges might be applicable. States usually penalize crimes against property that are motivated by a bias against race, color, religion, or national origin. These statutes are typically inclusive of vandalism against public property.

Librarians should be cautious of pursuing racist ideology. After all, one of the notorious acts of Hitler and the Nazis was to burn books written by Jewish authors, a 1933 tragedy that fueled the hate fires of anti-semitism and led to the 1938 burnings of human beings and their business on the streets of Nazi Germany. Beware of political mobs, librarians.