After Bucha, the World Must Never Delay Justice for Crimes Against Humanity

Majid Rafizadeh
|
Posted: Apr 09, 2022 12:01 AM
Share   Tweet
The opinions expressed by columnists are their own and do not necessarily represent the views of Townhall.com. 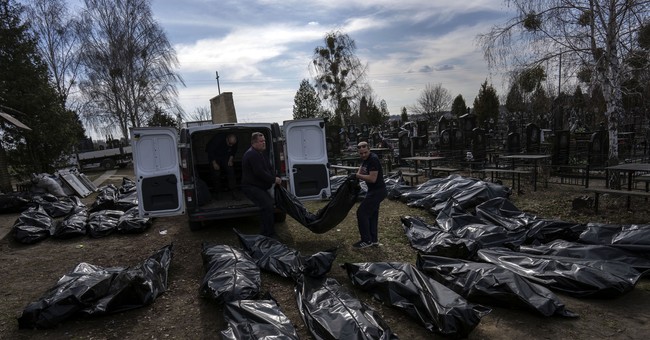 Soon after it became apparent that Russian forces had carried out mass killings of civilians in the town of Bucha as part of their invasion of Ukraine, international authorities began discussing the prospect of holding Russian President Vladimir Putin accountable for war crimes.

United Nations Secretary General Antonio Guterres called for an independent investigation into the killings, and the United States later announced that it was supporting a team of international prosecutors as they rendered assistance to the prosecutor general for Ukraine’s war crimes unit.

We must all maintain hope that these are just the first steps in a vigorous and coordinated effort to impose the appropriate consequences for anyone found to have participated, at any level, in crimes against humanity.

In fact, we should expect the response to mass killings in Bucha will become the starting point for a movement to demand accountability for other crimes against humanity, as well.

There are many incidents in that category which remain unresolved after the passage of years or even decades. Some of them, like bombings of civilian infrastructure in Syria, are also attributable to the Russian Federation.

And it is no mere coincidence that some of them are attributable to Russian allies like Iran.

In 1988, the Islamic Republic of Iran was the site of what many human rights experts and scholars of international law have labeled as a genocide and the single worst crime against humanity to take place in the latter half of the 20th century.

Between July and September of that year, approximately 30,000 political prisoners were executed following sham trials that often lasted less than five minutes. The “death commissions” responsible for those trials were empaneled in the wake of then-Supreme Leader Ruhollah Khomeini issuing a fatwa that targeted opposition activists from the principal Iranian opposition movement, the People’s Mojahedin Organization of Iran (PMOI) and declared them all guilty of the capital crime “enmity against God.”

In comparison to the massacre in Bucha, the 1988 massacre of Iranian prisoners took place relatively far from the public eye. But even in absence of social media’s influence on speed with which such information is disseminated, the 1988 massacre was revealed to Western policymakers almost immediately by Iranian resistance leader, Massoud Rajavi, and those fortunate prisoners who managed to breach the heavy restrictions that were placed on prison facilities as the killings got underway.

As a result, the sharp rise in executions was referenced in a UN resolution on Iran’s human rights situation that same year. Unfortunately, though, none of the relevant UN bodies followed up on that resolution – a fact that was acknowledged by UN human rights experts in September 2020 when they sent a letter to Iranian authorities calling for transparency about the massacre and its still-unfolding legacy.

The letter spoke of the “devastating impact” that inaction had upon the massacre’s survivors and the families of victims, as well as on the overall situation of human rights in Iran. By extension, the letter served as a general warning about the danger of allowing crimes against humanity to go unpunished, especially after they have been publicly acknowledged and condemned on the international stage.

Although one former Iranian prison official is currently facing trial in Sweden under universal jurisdiction for his part in the 1988 massacre, no one has been held accountable for it to this day. Even that official, Hamid Noury, was a comparatively low-level perpetrator of the killings.

Higher authorities have been systematically rewarded for their involvement, with the most egregious example coming just last year when Ebrahim Raisi was installed as president of the Islamic Republic. In 1988, he had been one of four officials who served on the Tehran death commission, whereupon he developed a reputation for particular dedication to Khomeini’s demand that clerical authorities “annihilate the enemies of Islam immediately.”

If that weren’t bad enough, Raisi was in charge of Iran’s judiciary in 2019 when the regime’s crackdown on a nationwide uprising killed at least 1,500 people and landed thousands of others in jail. The incident reinforced his reputation as the “butcher of Tehran” and illustrated an essential fact about the long-term impact of crimes against humanity.

If such acts are not confronted and punished at an early date, the underlying evil is sure to fester and spread, and become embedded in the system that allowed them to occur in the first place.

For this reason, it is vital that the Bucha massacre not be allowed to fall into the pattern of neglect that began impeding the movement for justice mere months after Iran’s massacre of political prisoners. If neither its perpetrators on the ground nor its overseers in Moscow are held accountable in the coming weeks, then we can expect Putin’s regime to begin rewarded those perpetrators in ways that make it all but certain that such crimes against humanity will recur and proliferate, and define the Russian Federation for years or decades to come.

That is certainly what happened with Iran, where the violent repression of dissent and the export of “revolutionary” principles of Islamic extremism are core features of the clerical regime’s strategy for maintaining power. But it is never too late to act. It is high time to end the impunity that the ruling ayatollahs have enjoyed for three decades and to hold them accountable for the crime against humanity that took place in 1988 in Iran.