The End of Men? 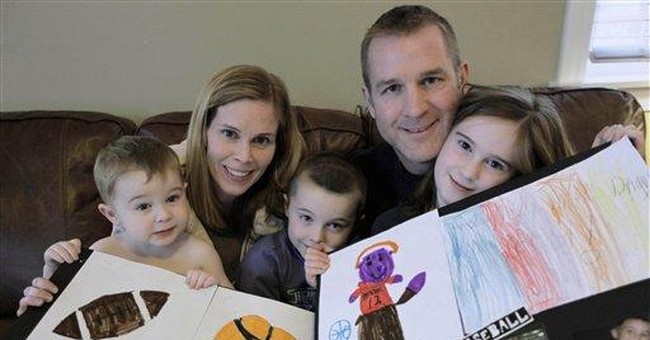 In her new book, "The End of Men," Hanna Rosin says we are on the verge of matriarchy.

Rosin doesn't exactly celebrate the demise of men, but she is puzzled by men's reluctance to let go of old gender roles: "The women take on new roles with gusto, while the men take them on only reluctantly."

It happens even in the upper classes. Steven, for example, is a househusband for his legal-eagle wife -- at least for now, while he goes to law school. "Hey if you want to win, you put your best batter on the plate," Steven says.

His masculinity does not cause him to put down his wife's achievement; rather he interprets her success as part of the prize he has won over other men in winning her.

But Steven agreed to stay home with the baby only after laying some ground rules. He would only be the "mediocre house dude," he told her, not supermom.

So at one point during the afternoon interview, Steven notices his son's diaper rash. His solution? He fills up a pail of water, tells the toddler he's a "tough guy" and to jump in.

When Sarah comes home at night, reports Rosin, "It's hard to describe what happened next without using cliche weather metaphors like 'whirlwind.'" Within minutes, Xavier is in a high chair, "his butt now lathered in cream, eating blueberries. Strawberries appeared on the table to be cut for a pie along with flour and butter." Procuring his own beer was Steve's work, but after that his wife took over.

"Steven feels entitled to check out on evenings and weekends, and this makes Sarah tired and sometimes angry." But on the plus side, it also means Xavier has a lot of mom time and a lot of dad time and the family has a lot of money, too.

But Steven is also ambivalent about his role: "All boys do is pee on things. Nothing good comes from being a man," he says, speaking of both his son and himself.

David Goodsall expresses the same ambivalence every time he passes a happy househusband on the playground. "It doesn't matter how Brooklyn-progressive we (urban, educated men born after 1980) are, we still think he's pitifully emasculated," he tells Rosin. "I want that guy to exist. I just don't want to be that guy."

And every time the check comes at a restaurant, David undergoes "the recurring ritual of public humiliation" when his girlfriend reaches for her wallet. It is, he says, the "slow drip of torture every time."

Rosin searched diligently for postfeminist men. She found only David and Steven. And these are the success stories mind you.

Far more men are checking out of school, work and marriage than ever before -- or being chucked out by frustrated and angry women. The global economy has been signaling the growing importance of a college degree for decades now. So why are 60 to 65 percent of college students now women? Why is it that nearly 1 in 4 sons of white college-educated parents reads below basic levels, compared to just 7 percent of girls?

Men must eventually start responding to the gender-neutral social status cues in ways that lead to work, love and married happiness in a gender-equal society, mustn't they?

But Rosin's stories suggest the structure of motivation in men and women is different.

Babies are less motivating for men, especially without a strongly gendered identity as husband and father. The successful men, attuned to a status game they believe they can win, will fight harder to beat other men. Men also experience status failures as far more humiliating than women. (Thus their failure to shift from manufacturing to service jobs or into house-husbands.) The less successful men will stop playing a game they think they will lose.

So women with successful husbands have more options than ever before. The vast majority of women work harder than ever to raise their children alone.

Here's the motivation paradox: We women are objectively more successful, but less happy. Men are doing less well than they ever have, relatively speaking, but honey badger don't care.

We will not solve this problem without taking masculinity seriously.